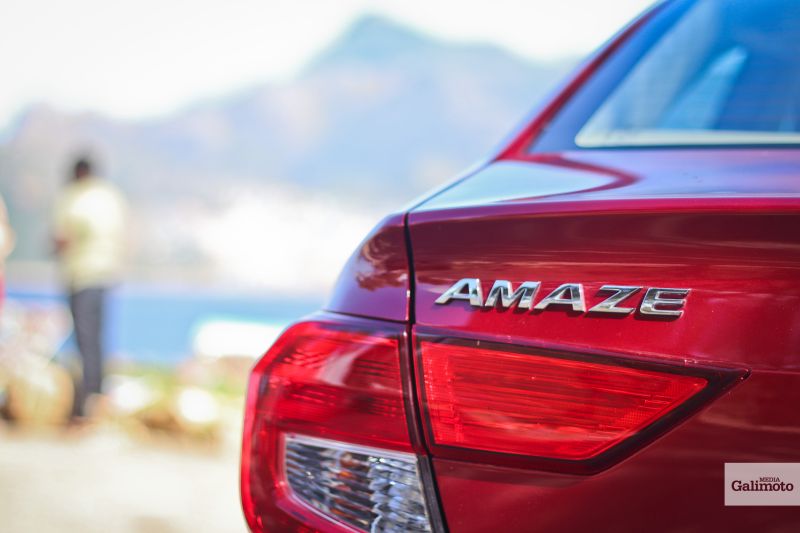 Good news, dear reader. Everything is back to normal in one part of my automotive imagination. After years of turbo-diesel automatics, yodeling CVT’s and GreenDream gobbledygook, my overall impression of Honda has been yanked perilously close to its original state by this new 2018 Amaze 1.2 Comfort.

I’d hate to stand in the way of automotive progress, especially when it comes in the shape of safety and efficiency, but our recent long-term test of this maroon metallic compact sedan made me go all sentimental. Iffy plastics but cool instruments, bizarre headlights and a rev-hungry motor; it was like being in the early 90’s again.

Back then, with fresh Namibian independence came a new wave of automotive experiences for me. My Dad had the Becker (car radio) agency in Windhoek so I’d often get to see pop-up headlight Ballades, flat and angular Preludes or the amazingly round and new 160/180E range. My best friend’s Mom had one too.

Those cars weren’t particularly well made, nor did they shine with safety ratings, but they represented good value and almost bullet-proof performance from their high-revving engines. And while this Amaze 1.2 runs out of ideas at a modest 6,500rpm, it carries many of the hallmarks from older Hondas.

I’m sure that its two front airbags, ABS brakes and high-tech construction will offer more protection than those old Ballades did. Although it’s never been tested by the cruel Euro-NCAP brigade, their Eastern equivalent (Asean-NCAP) gave the previous Brio / Amaze sedan a fairly substantial 4/5 star rating.

Speaking of which, do not call this a Brio sedan, Honda will get very cross. It’s an Amaze, it has nothing to do with the Brio (it does) and it’s a completely separate product, don’t you know. I don’t mind what it’s based on but I can tell you that it fills an important gap left by the currently-absent Vivo sedan.

Still, it doesn’t have the playground all to itself and has to share any segment (cough, rental) sales with Suzuki’s equally disproportionate DZire and the humdrum Toyota Etios sedan. And while we wrote another review for exactly that market (read it here) I’m here to tell you what it’s like to live with a Honda Amaze for a few weeks.

Its shape… those weird angles and funny proportions appear to be nobody’s cup of tea. While they’re not offensively ugly, the kindest thing I heard in weeks of temporary ownership was “Nice colour!” The massive chrome uni-brow with Honda logo also got a few nods, as did the recessed headlights, but that was it.

The rear end is where things get really strange because it honestly looks like Honda (and Suzuki, for that matter) simply welded a boot onto their existing hatchback. Which is not that unlikely. This results in a bizarre silhouette and rather puny boot lid. The space isn’t bad (420L) but the opening is rather narrow.

This is also where – in my humble opinion – I got the biggest feeling of cost-cutting. The boot lid can only be opened via an old-fashioned pull-lever next to the driver’s seat or by using the bearded key to physically turn its lock. The lid feels flimsy and looks unfinished in places; as do parts of the bonnet (hood).

You also can’t fold the rear seats to increase cargo capacity but one of my passengers identified the rigid backrest as a good safety (anti-theft) feature. Typing of the rear seating area, it comfortably houses two adults or three kids with sufficient head- and leg-room in all seats.

We even managed to install a rear-facing baby seat behind the driver’s seat which was adjusted to fit my 1.92m frame. This made everything a bit, uhh, cozy, but absolutely fine for shorter journeys. Being of Indian manufacturing origin, the Amaze lands on local shores with dirt-friendly beige fabric; and a nationwide sharp intake of breath.

Saffas hate anything that’s not black leather so Honda S.A. gives you the option of artificial black leather with contrast beige strips; as fitted here. I would’ve preferred the cloth seats on those scorching December days but have to admit that the black fits in well with this sedan’s black dashboard and door tops, steering wheel, levers and carpets.

From here on, it’s mostly good news. This Comfort model comes standard with ferocious climate control which can cool the cabin in a matter of minutes and while the USB/Aux radio looks extremely basic by today’s standards, it did everything we asked of it; including spoken nav commands via smartphone Bluetooth streaming.

The steering wheel offers a few audio controls and height adjustment while the driver’s seat can also be ratcheted vertically. Other goodies in here include four power windows, exterior power mirrors, lock button and a 12V socket. Cruise control, auto lights or auto wipers are all absent but not unfairly so at this price.

Like most modern Hondas, the Amaze does not have a coolant dial but provides an instant consumption gauge as part of its half-digital instrumentation. This sits between the two beautiful milled-look main dials and contains a decent dual-trip computer with range indicator as well as a digital fuel level display.

The manufacturer claims average fuel consumption of 5.6L/100km from the small 35L tank and our overall average of 6.7L/100km proves that this figure should be achievable with careful driving. That finally gets us to the Amaze engine and performance, both of which get our approval.

Feeling more like a 1.4 or 1.6L unit, this 1.2 four-cylinder petrol engine sends up to 66kW or 110Nm to the front wheels via a simple and easy-to-operate five-speed manual gearbox. Initial starts, especially on inclines, can require a degree of care between the clutch bite-point and the tiny engine’s power output.

Once on the move though, this little motor impressed me no end. It exhibits a surprising amount of low-down torque (for its size), sounds quite gruff when given the beans and delivers its power in a fairly even way… until the noticeable power spike at 4,500rpm. I believe the kids nowadays would say “VTEC kicked in, yo!”

Which takes us to the 1990’s again because that’s how you would drive a Honda back then; especially if you presented the poor thing with additional altitude, weight or heat. This car loved being red-lined and our performance tests revealed a best 0-100km/h time of 11.65 seconds at sea level. Honda claims 12.3.

400m fell in 17.95 seconds and a more telling 125.46km/h, evidence that this compact sedan runs out of puff at higher speeds. A single emergency brake test from 100km/h was absolved in a very commendable 2.90 seconds and slightly more average 41.27m. Anti-lock brakes are standard but there is no traction or stability control.

With its tall posture and generous ground clearance (170mm), fast cornering produces substantial body roll but there is decent grip from the 175/65R15 Indian-made Bridgestone tyres for those who know their limits. The Amaze rides fairly comfortably but gets choppy when heavily laden; no thanks to a basic live rear axle.

Its budget construction (and light steering) also brings about a slight nervousness at high speeds which gets exasperated in heavy cross winds. All of this can be expected though and the budget-conscious buyer will have to save up much longer to find a product which is impervious to all of the above.

Which brings us full circle to my initial revelation – the Amaze took me back to what Hondas used to be like: affordable, spacious, comfortable, slightly plasticky and well-specified with a rev-hungry motor. Even on hot summer days and with an often full load of baby paraphernalia, this little sedan performed admirably.

Sure, it’s not the best-looking or most gadget-laden thing out there, nor does it stem from a place of great luxury, but due to its easy nature I am happy to recommend it to cash-strapped families, seniors or tourists. My only real complaint is this car’s limp-wristed, soft rev-limiter. I prefer the machine-gun salvos of olden days.