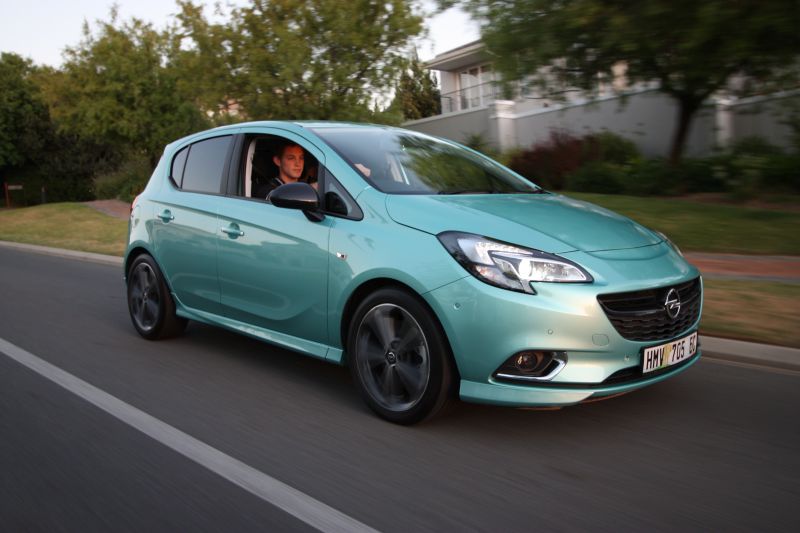 Where did you go on holiday? Henties, Cape Town, Thailand or maybe your uncle’s plaas? At the risk of sounding terribly spoilt, I did so much traveling in 2015 that I spent my entire holiday at home. Either with my feet up, my nose in a book, hands on a game controller or submerged in a swimming pool.

Although none of this requires the use of an automobile, there are always errands to run and people to visit around the festive season. Like most motoring journalists I could’ve pulled my own car out of the garage, blown the dust and cobwebs off, and just used that to zip around to any X-mas-y appointments.

However. It appears that we at NamWheels were on our best behavior last year because the jolly Santas at General Motors gave us the use of a press car for the entire holiday period. How nice is that! And it wasn’t any old banger, shortly before the school holidays started they delivered a metallic green Corsa.

To give it its full name, you’re now looking at an Opel Corsa 5-door 1.4T Sport in Mint Green. Depending on how the light falls on it, we eventually agreed that the colour should rather be called Caribbean Gift Shop Dolphin Statue Turqoise. Opel offers other paint hues but I grew very fond of this one for a few reasons.

First of all, it’s undoubtedly distinctive and rare. Not only would we easily spot our funky friend in an overcrowded parking lot, we also failed to see another Corsa in this colour. As the days rolled by and the new year was born, we also discovered that this colour reflects sunlight and hides dirt equally well.

Before I get completely carried away and start writing love poems to its coating, let me touch on the car itself. Opel launched their new “Three Germans” in quick succession and there’s no doubt that Corsa, Adam (trendy supermini) and Mokka (compact SUV) deliver on their sophisticated and stylish promises.

The sales charts will also back this up, as Opel employed new engines and innovative technology in all of these models. Although our test car had the lively 1.4-litre four-cylinder turbo-petrol you’ll also find in other GM products, Opel can also sell you a Corsa with a relatively new 1-litre three-cylinder turbo-petrol motor.

Having spent quite some time with both engines in all three models, I can vouch for the fact that they don’t have to fear the competition in terms of power and efficiency. Time and again this car’s comprehensive and cheeky trip computer would encourage me to change up early; and the resulting torque was impressive.

Opel lays claim to 5.9L/100km average consumption and we averaged a decent 7.9L/100km on three tank fillings (45L) used mostly for city driving. Head for the long road, slot in sixth gear and careful cruising will easily hit the manufacturer’s claim. We measured 0-100km/h in 9.16 seconds and 400m in 16.54 seconds.

Other things I can report on are the excellent manual air-conditioning and easy-to-use infotainment system with smartphone app controls (including navigation). You also get front power windows and mirrors, zooty seat fabric, a 285L boot with 60/40 split folding rear seats, as well as a light and fluffy City Steering Mode.

There’s even more standard stuff and an additional option package (with auto parking) available – visit your nearest Opel dealer for the complete low-down. More than that, the Opel Corsa Sport quickly integrated itself into various drivers’ lives because of its punchy engine, versatility and ease of use.

To come up with some criticism I’m gonna have to nit-pick here… The fuel and temperature gauges are a series of light bars which can be misleading at times. The sporty wheels make for a harsh ride over bad roads and uh, there’s no volume knob. Hashtag whatever, this is a great little car.

And I’m not just saying that because it was given to us as a holiday runabout. My wife liked it so much that she started looking at prices on the web (from N$275,000) and two neighbors came around for a lengthy demonstration. But most importantly, I got ‘n knop in my keel when they collected our summer love.