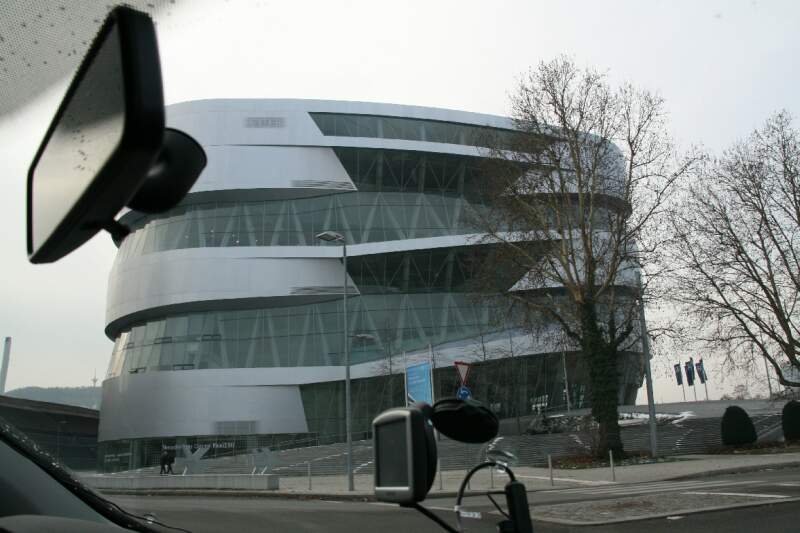 The Polizei had just trespassed into motoring genesis, Daimler merging with Benz & Cie only years later and shifting base to Untertürkheim on the (then) outskirts of Stuttgart. Over a century later you shall still locate the mother factory of Mercedes-Benz here, as well as their impressive Museum which opened in May 2006. And we paid it a visit.

Pre-trip investigation revealed excessive mention of the DNA-inspired double-helix building, which turned out to be well-founded. Its basic shape is a rounded triangle with a hollow core, eight stories high with cascading floors and a glass shell that have bagged it many accolades from students of architecture.

After parting with 8 Euros (N$100) per adult each visitor is cheerfully assaulted with a portable audio guide (with multiple languages, user-guided feedback and optional kiddies’ narrative) before they are whisked to the top floor in one of three elevators whose projectors display a short film on the opposing inner core wall. Germans; they’re so precise.

The first display swiftly deals with former opponents like the horse before entering the chamber of pioneering innovations. Yes, the first car ever made is on display, followed by various engines and motorised carriage concepts, even boats and commercial vehicles.

A replica of the world’s first motorcycle is also on display, the original having been accidentally invented by Gottlieb Daimler and Wilhelm Maybach while using a wooden bicycle frame to test a 1hp engine. It had a top speed of 12km/h and no suspension, and Herr Daimler is said to have personally test-ridden it for a good 3km. Respect.

Each floor deals with a certain era or milestone in the company’s history and to avoid customer boredom on the semi-circular walk down to the next area, the walls and ceilings are decorated with corresponding documents, artefacts and innovations. The total floor size of the Museum is about 16 500 m2, featuring roughly 160 cars and 1 500 exhibitions.

Nine levels dedicate their shiny tiles to vehicles in nothing less but mint condition, plus ancillary areas on most floors for special expo’s. During our visit we were treated to (among others) displays of Mercedes-Benz technical innovations and a vibrant ensemble of pre-owned Mercs. Their former owners included a Californian governator, a princess from Wales, the pope, rock stars and heads of state.

My personal favourite was the 1930’s era with its contrasting ambience and unbelievably priceless collection of 500 series Mercedes’. 500K, SSK, SSKL were enough for me to violate the recommended 2-hour tour and I fear this may have been the point at which I lost my companions. Or the other way ‘round.

Fact is, I can’t really recall them leaving me behind as I had my eyes and camera firmly pointed at the gorgeous sheet metal of the pre-WWII monsters for quite some time. Luckily, visitors who lose interest in old cars may choose to get an elevator downstairs to the shops and restaurants. I did not lose interest. Given the choice I would’ve gladly pulled up a chair and waited for Fritz and Hans to carry me out at 6pm.

I still nurture an unhealthy adoration for the 1950’s 300SL Gullwing, which there were two of elsewhere in the Museum, but I hasten to admit that on that sub-zero January day I lost my heart to another Benz of epic proportions and presence; the 500K Maharaja. Its sheer size and brash beauty have caused much grief to my backspace button, but I have finally decided on a fitting adjective: majestic.

Further highlights included dozens of race and rally cars, including the completely bonkers 1909 “Blitzen Benz” with its 21.4-litre straight-four petrol engine. Safety and ergonomic advances also enjoy a lot of floor-space, while the odd concept or test vehicle may even surprise the hardened Merc-fans amongst us. Just one of these is the strictly prototype and decidedly orange C111 which had Mercedes receiving blank cheques through the mail but never went on sale.

The Mercedes-Benz Museum is an automotive temple not just for fans of the star and is open from 9am to 6pm Tuesdays to Sundays. I would recommend you get there early to avoid crowds and take at least half a day to meander your way through, which should leave you enough time to make the 20-minute journey to a small industrial area of Stuttgart called Zuffenhausen.

Here you will suddenly stand before another highly reflective Museum with the word “Porsche” in big red letters nailed to its flanks; and we’ll bring you that report next week.