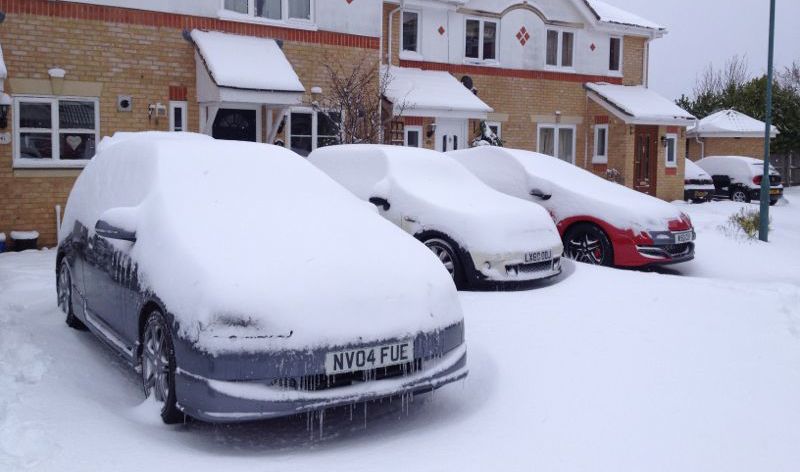 Above image: Covered by 4 inches of snow, lies the 6th Honda that I’ve owned since my first car.

Powered dreams, some by the red H!

One would easily think that my heart is only ticking along by red Honda-badged blood cells as seven of the 12 cars I had up till now were Honda’s. It’s not entirely true as there are many unique performance cars I admire, but yes, I do have a soft spot for the bullet-proof K20 motor that filled lots of Honda engine bays from around 1999, right up till 2012.

My first ever car I owned was a 1990 Honda Ballade (SH4) 1.6 SOHC with 86 kW which my dad bought from an old lady who had it from new. So yes, while the car only had 42 000km on it, the clutch needed replacement. It wasn’t even the DOHC version, but because of its low weight, it still managed to dash to 100 in 9.6 seconds. Since then, cars grew in size considerably as new models came out roughly every four years.

“I never had any issues with it.”

Put a Mk1 Golf next to a Golf 7, and you will understand. In size, It’s like a Polo Playa next to a Golf from today. I paid R32 000 for the Ballade and sold it nearly 3 years later, again for R32 000, but with 107 000km on it. I never had any issues with it. The only part I needed to replace was the igniter module, and Mercedes replaced that for free. (under a so-called advanced decision in their warranty system.) Back then Honda was still sold in SA in partnership with Mercedes-Benz South Africa.

Then, after spending 2 years in the UK on a working holiday visa, (and drooling over the new EP3 Civic Type R launched in that time) I returned to SA and borrowed my dad’s 1992 Honda Prelude automatic for nine months.

It had a 2.2L motor with 97kW on the flywheel and it had a 4-speed auto-box, which made the car more lazy than it already was. On the open road it was a lovely cruiser, especially through long sweeping bends, due to its low center of gravity, but in city traffic, it felt lazy… especially with gear ratios as far as North is from South! Using it around town would give me 12L/100km, but that could shrink to nine with a light foot on the open road.

For me it was quite a dramatic design with more confidence in appearance than power, but it did age quite well to a point, where today, it just looks old.

The time came where I needed to decide whether I would take over the Prelude completely from my dad, and it was during that time that I heard of a 92 Honda CR-X which was for sale by a lawyer in our town. I drove there with the Prelude, and immediately he was interested in swapping cars!

With also 97kW on tap, but from a 1.6 DOHC engine, I barely drove off with the CRX and immediately realised the different nature of the car. The power to weight ratio, and the fact that it was a manual, plastered a smile on my face. It was much more friendly in appearance than the Prelude, but it could drive circles around the 2.2 lump, wagging its tail. Performance figures for the CR-X stood at 8.7 seconds for the 0-100 sprint, with a top speed of 207km/h.

The Prelude took 10 sec to clear 100 and topped out at 200km/h, almost half a day later. Whilst still in South Africa, we took a bit of a detour to other brands with regards to daily commuting.

Mid 2008 we embarked on a European adventure that would (had to 🙂 include working, but with
the main focus on traveling. I probably read through Autotrader UK, even before we got
there as I so badly wanted an EP3 Civic Type R which was never available on South African soil.

Instead, for the interim, I found another red CR-X, but this time in the replacement Del Sol guise!
(The EP3 had to wait until I could afford getting the right one)

The Del Sol for me almost felt like a type R version of my older CRX, as it had the B16 VTEC motor that, together with 118kW in a lightweight body, freely revved to 8 000rpm, rocketing the Del Sol to 100 in 7.9 sec. The handling of the Del Sol was pretty much go cart like, even in standard guise.

I liked everything about the car, but all of them were notorious for gathering rust on the wheel arches and doors. We eventually sold it as the time came to get extra seats for our first born.

With the Civic EP3 Type-R still lurking in my thoughts from afar, it still wasn’t the right timing yet, so instead I opted for another scarce model, a 1998 Honda Civic Coupe 1.6 V-tec SI. This Coupe was fitted with a 1.6 SOHC D16Z6 VTEC motor that produced 93kW. It did 0-100 km/h in 9.3 seconds, so it was brisk, but not mental like the DOHC B16 motor.

The gear ratios were also spaced further apart, which made it a nice cruiser on the open road. In town, puling away from a traffic light, I never felt the urge to challenge any car. I would say it’s the long gears that don’t beg for it. It had the extra seats we looked for, but soon loading a baby seat in and out using the longer front door, became rather painful… we definitely needed more doors! For a brief stint we replaced it with a boring VW BORA. (Similar to a Mk4 VW Jetta)

“Buying cars in the UK is so easy…”

Buying cars in the UK is so easy, as the registration plate always stays on a car. So when you
sell your car, you just fill in the local DVLA new owner section on the car’s registration doc, and there you go. No new plates needed, etc.

On a misty cold morning, November 12th 2011, I boarded the train to Durham to fetch my long-awaited Civic Type R EP3. I paid £5600 and it was the beautiful cosmic grey 2004 face-lift model. It had only 39 000 miles on the clock and it was in absolute pristine condition. The seller was so happy with the buyer that he even filled it up for me.

I was smiling all the way of the 288 miles I had to cover down south.

Masses of enthusiasts referred to it as the ‘bread van’ due to its bullet shape, and it was awarded everywhere as the best hot hatch in its class that time. Weighing in at just shy of 1 200kg, it surely had the power to weight ratio advantage over its turbo’d German competition. I never had it on a track to explore its full potential, but with just some mild spirited driving on B roads in the UK was already so rewarding. It was like driving on rails.

Some enthusiasts, even had a ‘fast road’ set-up done to their EP3’s, making it even more focussed. The gear lever sat close to your left hand, straight from the dash board, which begged to be changed as you could almost just flick a finger with the rest of your hand on the steering wheel, and your right hand holding your cappuccino!

At the heart of the EP3 was the legendary K20A motor, which was the main reason why I was after this Civic. It begged to be revved and it would do it day in and day out, without giving you a hint of worry. It was bullet proof!

I eventually sold the EP3 as I was looking for the later premier edition, with factory tinted rear windows, Recaro seats, and air-con. Yes! My car didn’t have aircon. It was the UK, and that year summer was on a Thursday!

After having put on 20 000 miles, I sold the EP3 for £200 less than I bought it for. A cosmic grey Premier edition was still fetching quite some money then and something else caught my eye. I saw a 2003 JDM Honda Accord Euro R with the 162kW version of the K20A.

It wasn’t really what I was looking for, but again, the JDM genes hidden underneath the hood in the form of the uprated K20A engine, together with LSD made it attractive! I drove all the way to Cardiff in Wales to view this car. It redlined at 8 500rpm, but it had an upmarket feel to it in the form of the CL7 Accord saloon body. The chassis was softer than the Civic, but it felt much more forgiving. It felt like you could push it even more in the corners.

I made a deposit and a week later I took the train to Cardiff, this time not for rugby, but to fetch a 4-door sedan that could take five people and was more powerful than my EP3! I was the second owner in the UK and bought it from an IT guy who imported it via a UK company called Torque GT. It’s their business to import JDM (Japan Domestic Market) cars from Japan to the UK. They are well known under JDM enthusiasts, for bringing in the cream of the JDM crop straight from Japan.

Eventually, just before we immigrated back to South Africa, I had the Accord’s ECU re-flashed after some research. Reliability was not affected at all, and together with a CT Engineering induction kit, I added quite a bit of extra horses under the hood. VTEC now came in at 5 000rpm, instead of 6 000rpm, and it would carry all the way to 8 500 without hesitation.

The sound was absolutely glorious!

I shipped the car to South Africa, and even joined a local Honda breakfast ride or two. Many times I had been stopped asking whether the car was for sale. It was subtle in appearance compared the the Civic Type R’s you get these days (like the FK2 / FK8) but it was properly fast for a non-turbo 2.0 L.

I see my passion for cars also as a means to reach people where needed, and as life happens, it sometimes can throw a curve ball. We went through a financially difficult season in our lives, and I had to sell the only Euro R in the Western Cape. If you see it driving in Paarl, please wave! A Honda purist there has bought it, and who knows what I will buy next? Only time will tell..!