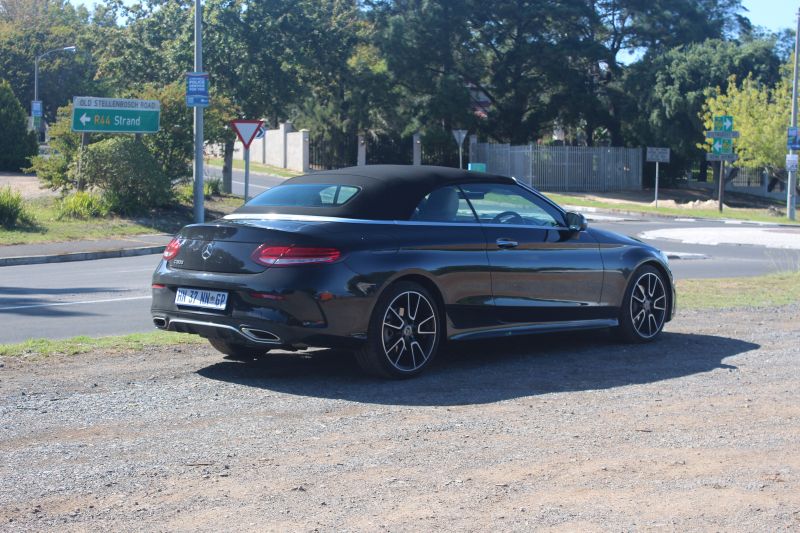 Yoh, that’s pretty. How much does it cost?

You need to know: Three times. That’s how often I got asked about this car’s price in less than 12 hours. A lot of that may be down to this press unit’s striking combination of black metallic paint, sleek light clusters on every corner, pincushion Mercedes radiator grill, pale beige interior and AMG Line goodies.

Also part of the face-lifted C-Class are a pair of crisp displays; a central one for every imaginable form of modern infotainment and vehicle setting, plus another for the main instrumentation. Being a modern Mercedes-Benz, this sexy body contains many safety and luxury features on top of new, more efficient drive trains.

More info: It’s also peppered with AMG badges, which seem to be overstocked at Merc HQ. Of the 23 new C-Classes on sale right now, only seven are non-AMG cars and six are genuine monsters from the caves of Affalterbach. So we’ve now reached a point where fake AMG’s are more prolific than real ones; or even regular C-Classes. Tsk, tsk, tsk.

What else? Obviously there are multiple drive modes to play with but not so obviously this car’s clever suspension provides reasonably soft damping. This despite the huge wheels wrapped in thin Pirelli P-Zeros. These not only provide excellent braking and high-speed grip (backed by clever ESP intervention) but also superb turn-in response from the quick steering mechanism.

Watch out for: Umm… it’s thirsty around town, the gearbox slacks at times and there’s no physical boot opener. The cavity itself is oddly shaped and only takes about 300L but real cabriolet disciples will laugh that off as a triviality. You can feel body flex on bad roads and the alarm blows every morning at 2h25.

Standard kit is comprehensive, the expensive options list even more so.

Why you want one: Easy. It’s an extremely attractive cabrio with four usable seats under a sturdy fabric roof which transforms in half a minute; and at speeds up to 50km/h. You also get two wind deflectors, a master window switch, front seat and neck heaters, two seat belt butlers, clever LED headlights, a two year warranty and 6-year/100,000km service plan.