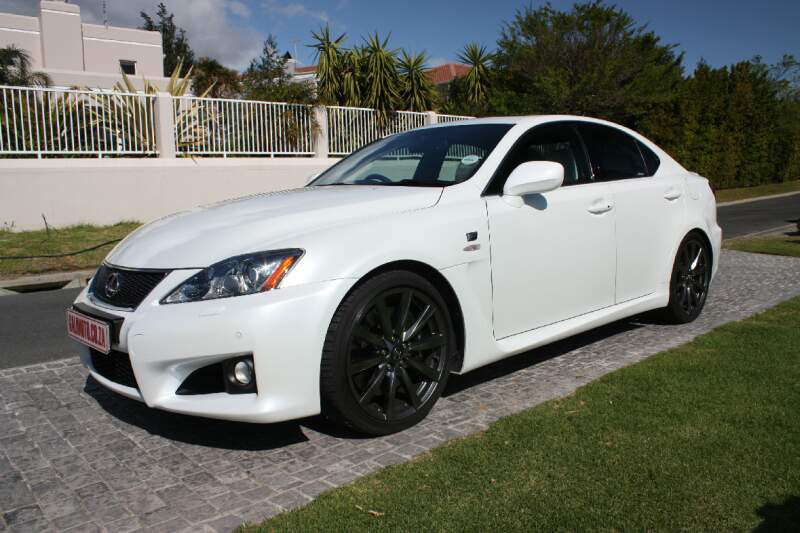 Allow me to share one of my life mottos: be careful what you wish for, it might just come true. I must have been subconsciously yearning for a ballistic sedan because I was handed the key to a Lexus IS-F earlier this week. I pinched myself, rubbed my eyes and it was still there. Fantastic!

If you are unfamiliar with the IS-F, shame on you. Lexi are big on features and luxury, but a little short on heritage and excitement. Enter hastily from the right, the IS-F, to bestow its maker’s image with some muscle and street cred.

Lexus has been building powerful cars for years, their weakest example already bringing 200-plus horses to the party. However; even their V8 muscle is fitted to six-figure cruisers which deliver their goods in the most sophisticated and sublime (cough, boring, cough) way.

Help eventually arrived in the Samurai shape of the IS-F, which is basically an IS250 with ostentatious go-faster body panels and a snarling 5-litre V8 under its bulging bonnet. I adore the concept – add some spice to your brand by putting the biggest engine in the smallest car, then pimp it.

Having had the pleasure of experiencing an IS250 near the limit, I always champion the small Lexus as one of the sweetest handling luxury cars available today. By doubling its power and stiffening everything up, the IS-F is even more capable but now borders on insane.

The rock-hard suspension will become evident in the first few meters of your drive, underlined by the tighter body-hugging bucket seats. The IS steering is still meaty and direct, and still does that sideways shuffle in slow full-lock turns.

IS-F owners can also brag with additional badges around the cabin, a blue steering wheel insert and a 300km/h speedometer. The third brake light had to be slightly raised in order to clear the small boot lip spoiler, but that complements the four stacked exhausts, huge black wheels and massive gills.

By the way, those quad pipes aren’t fake – there are two pairs of stacked exhaust pipes behind the chrome facade. I checked. A lot. They emit a reasonably subdued V8 burble which allows you to still phone your stock broker or P.A. while driving.

Just try to keep it under 3600rpm and part throttle as the 311kW (423hp) 505Nm V8 will open a secondary intake at said rpm and full throttle. This easily doubles its volume and lowers its beat by a few octaves, assaulting anything within half a kilometre’s earshot with a deep, hammering V8 howl.

And seeing that the opposed-eight monster is bolted to an eight-speed automatic with pedal shifts, you’ll get to annoy call partners and entire suburbs more often. You may even select Sport or Snow mode, switch off various driver aids, or go into simulated manual mode.

Last-named mode proved to be my favourite as the IS-F will quickly and diligently obey your geared demands, loudly blip the throttle between down-shifts and beep at you occasionally. The Lexus beeps for unfeasible down-shifts, suggested up-shifts, open doors, forgotten lights, missing keys and probably bad breath.

I didn’t mind that it beeps it lot, has eight gears and a terribly hard ride, drinks like a Hummer and that the dashboard takes a while to get used to. Because when your floor it, the V8 (and indeed the IS-F) speeds up so fast that all’s forgiven again.

We managed 0-100km/h in 5.4 seconds and the ¼ mile in 13 seconds flat; a little off the manufacturer specs but amazing nonetheless. And although the IS-F is not as twitchy as some of its German competitors, 300-plus kilowatt will eventually foil the clever suspension and get the orange skidding car light to flicker.

With a limited-slip differential, multiple stability and braking assistance programs, the IS-F will do its utmost to keep you pointing in the right direction, but woe unto you if you surpass its stellar levels of grip. Even the unbelievably competent six-pot Brembo brakes may not save you then.

The flipside of this coin is that any super-saloon poses this threat and that the IS-F can (barring the firm suspension) float along in full Lexus mode. Crisp music, low revs, smooth gear changes, fantastic lights and luxurious ambience.

All this costs N$792 900 and comes with a 4-year 100 000km warranty and maintenance plan. Unlike traditional Lexi, it isn’t particularly comfortable, restrained or elegant. In fact, it’s quite hard, rather brash, tremendously fast and very exciting. In other words, fantastic!