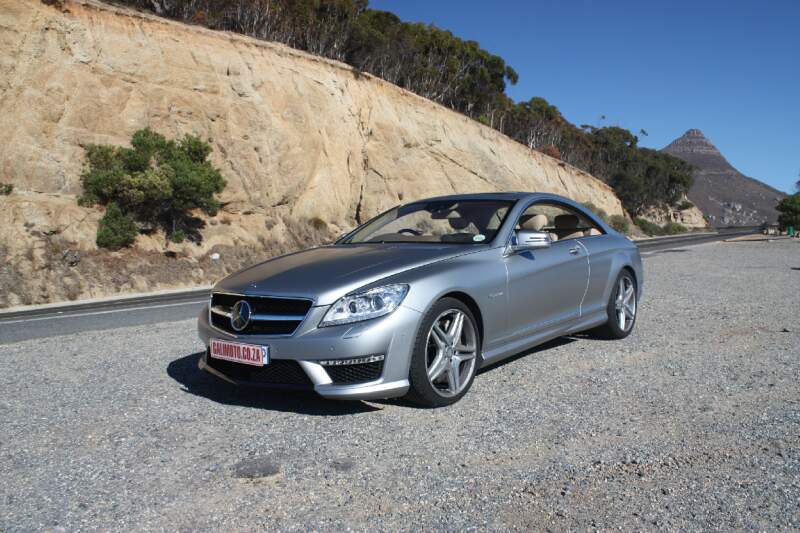 Pass the caviar and that black credit card; I’m still high from driving a car so superior and luxurious that only real Beluga and serious retail therapy will cure my withdrawal symptoms. The Mercedes-Benz CL63 AMG is near the top of Merc’s price list and makes damn sure you (and others) know about it.

Its base price of N$2.13 million won’t buy you an equivalent Ferrari, Bentley or Aston Martin, but it will buy you a Porsche 911 Turbo or two Jaguar XKR’s. You could also spend your N$2,130,610 on eight A-Classes, just over fourteen new Polos or twenty-two Hyundai Atos’.

Tough one, isn’t it? To be completely honest, I don’t think it is. The CL Merc is, and always has been, an über-money car. You don’t aspire to own one. You don’t save up to get one. You simply ignore the price and buy one because you like it, owned the previous version, or Richard at the country club recommended it.

Its purchase and purpose is just as extravagant as that giant yacht you commissioned last autumn. The third-most expensive Mercedes exists purely to showcase what Benz can do when money’s no object and is bought by people with a similar mindset.

The regular CL’s are already imposing and sophisticated but AMG puts the cherry on top by adding extra muscles to the big WaBenzi. Gigantic wheels sit in flared wheel arches, low spoilers house diffusers and a quartet of chromed rectangular exhaust pipes.

I won’t bother much with the interior; it would take up too much space. The inside is opulent, spacious and stuffed with everything you could imagine. Active seats with massage function, voice control, rear camera, harman kardon Logic 7, DVD changer, you name it – it’s got it.

Engine wise, the German tuner has ditched its high-revving 6.2-litre V8 in favour of Mercedes’ new 4.7-litre twin-turbo V8, which just replaced the ‘normal’ Mercedes 5.5-litre V8. The new direct-injection motor was given a stern talking to and now develops 400kW (544hp) and 800Nm from its AMG’d 5.5 litres.

Hand over another N$71,800 and AMG will increase these outputs to 420kW (571hp) and 900Nm, also raising the car’s 250km/h speed limiter to 300. I’m utterly ashamed to proclaim that, unless you live near an Autobahn, this seems a bit excessive and pointless to me.

At low speeds, the fat lady sends a deep thumping noise to anyone behind you; open the windows and you may even listen to the two turbochargers spooling up . The big yacht is stable and comfortable around town, her feather-light controls translating into gentle and precise movements.

Switch from Comfort to Sport or even Manual Mode (with beautiful metal pedals behind the half-alcantara multifunction steering wheel) and everything becomes a little livelier. Now she barks between down-shifts and accelerates with an addictive V8 growl, unbelievable thrust and seamless gear changes.

The next thing you’ll experience, I guarantee it, is the fantastic brakes. Because the massive CL63 ignores the laws of physics and picks up speed SO quickly that every other car becomes an instant obstacle or potential accident.

Other road users can often be ignorant and egotistical, but even the remainder simply underestimates the pace at which the matt silver bullet is approaching, necessitating you to stomp on the über-brakes to bring the AMG back from near take-off speeds.

I did notice quite a sizable turbo-gap when I drove these cars in Jo’burg, but at the coast there is no such thing – the CL63 AMG pins you down and rockets forward at any speed and any gear, leaving everything for dead and inviting you to take gaps and chances where previously there were none.

This anti-social behaviour is probably the worst thing about the Bi-Turbo V8 AMG; it’s like going to a knife fight with a laser-guided machine gun. Mounted to a gunship helicopter. You have to practise mindboggling levels of self-discipline and often self-preservation.

The good news is that this remains a thoroughbred Mercedes. It cruises quietly and comfortably, even its ABC Sports suspension mode is still tolerable and I’m ashamed to report that I once achieved 10.8L/100km with extremely boring driving and help from the stop/start ECO mode.

The CL63 AMG is amazing and excessive on every level; it’s leaner, cleaner and meaner than before. You may choose to buy two dozen Hyundais instead but you can only ever drive one car. And I prefer the CL63.