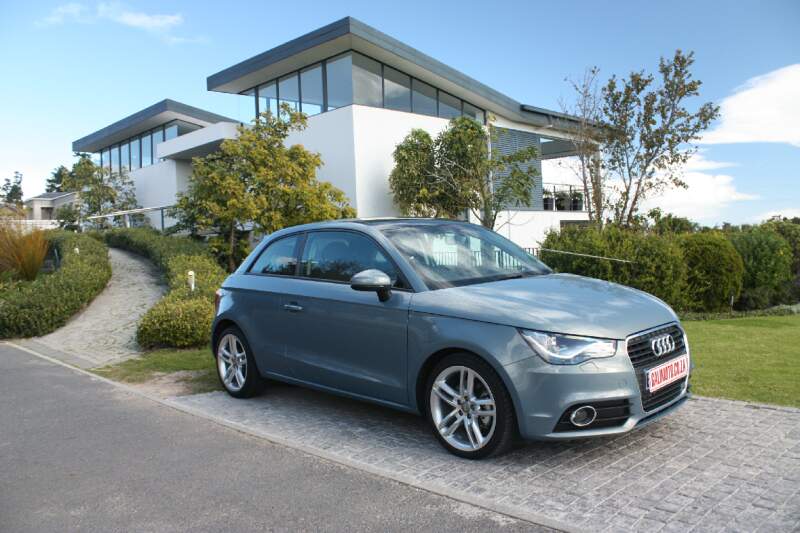 After many thoughts of rejection, years of feeling inadequate and a growing inferiority complex, I finally whipped out my big red pen and made an X next to the word Audi. That’s right – for reasons unknown, this is my virgin test of an Ingolstadt car.

The predominantly German crowd I hang out with were silly with excitement and predominantly asked the same silly question: R8? Afraid not, Fritz. Not only did I get stuck with the tiniest Audi and lowest “A” denominator, they also gave me a car with a miniature turbo-Diesel engine.

Never mind. My initial impression was very favourable – the A1 has a cheeky whiff of Mini about it and, despite what some critics say, I actually quite like its rear end. The tubular light clusters give it an angry face from behind, which is mirrored by the crisp white strips at the other end.

Audi’s advantage through technology (Vorsprung durch Technik) became immediately apparent with the aforementioned lights. To improve visibility, the front ones dim when you indicate. The rears are part of the car’s hatch but Audi built rudimentary LED lights into the fenders when the tailgate is up. Clever.

Much cleverness is also to be found on the inside, which interested me more than any part of this car. You see, irrespective of model or trim, my contemporaries laud Audi as the king of interior quality. After a brief investigation which involved heavy prodding and fidgeting, I can only concur. It’s top of the class.

Black and charcoal hues are just as sombre and sensible as most switchgear, knobs, dials and displays. Everything feels so durable and solid, so well thought through, so German. The fabric seats are comfy and supportive, and there’s a surprising amount of space for four adults.

Although based on a Polo platform, this is not a Polo competitor. The A1 has Fiat 500 proportions and Mini Cooper aspirations, Mercedes A-Class pricing and BMW 1-Series dynamics. What you’re buying is a small city car with exceptional quality.

The next thing to strike me was how easy it is to pilot this Audi. A few A4 generations back (in a friend’s car), I encountered the world’s most interfering and annoying electronic clutch, but the feather-light unit in this car is a joy to operate.

Five forward gears and reverse are selected via a sturdy lever with a notchy but positive feel; the brakes are easily modulated and excellent with full use. Steering feel is also on the lighter side, underlining the city / urban commuting potential of this little gem.

Given the right circumstances, the A1 also switches off its engine while stationary. The Start/Stop system can be deactivated but works flawlessly and revives the engine by the time your foot and the clutch pedal hit the floor to engage first gear.

This system, relatively tall gear ratios and the modern turbo-Diesel claim an average consumption of just 3.9L/100km through the comprehensive board computer. I’m afraid you won’t achieve this figure in city traffic as the little motor, despite being quite lively, needs to labour a bit to achieve decent momentum. Our city figure was closer to 6L/100km.

However; ease off the throttle and/or show it some open road and this figure plummets. The 1.6L turbo-Diesel in this trim churns out 77kW (105hp) or an astounding 250Nm and will be happy with 3 to 4L/100km at highway speeds as it cruises quietly and comfortably. Fifth or fourth gear provides sufficient torque to leisurely overtake.

Full-throttle antics are also leisurely with a claimed 0-100km/h time of 10.5 seconds and top whack of 190km/h. While being tremendously eager, the little Diesel doesn’t really lend itself to tyre-shredding behaviour but its sporty chassis will allow plenty of nippy cornering.

The ride can get a bit choppy at times, aggravated by the no-cost sports suspension and optional 17-inch wheels on our test unit. It also featured metallic paint, a panorama sunroof, keyless entry/ignition, front armrest, MMI-3G Plus navigation system, Xenon lights and a Media Style package, driving its N$247,000 price to N$325,350.

You probably don’t need all these toys but they are wonderful to have; especially the intuitive and super-crisp MMI multimedia system. Plus, the A1 comes standard with a hoard of safety and comfort features anyway – plus a five-year 100,000km Audi Freeway plan.

You can also choose from multiple interior trims, ten wheel designs, eleven colours and various style packages to enhance your A1 and make your experience as memorable as mine.