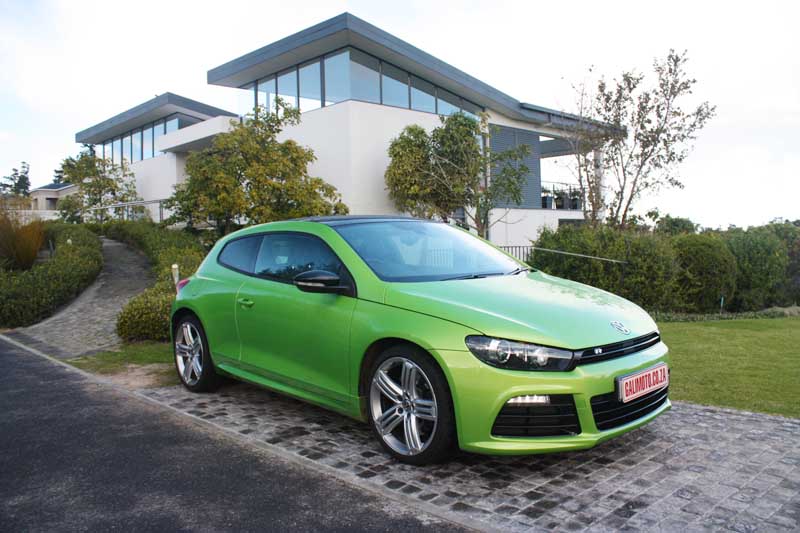 This weekend I had the fortunate experience of testing a car that I had recently experienced on its media launch. Living with a car for a few days is completely different to chasing five identical cars through carefully selected scenery in an adult adaptation of who-can-get-there-first.

So please excuse the lack of tech talk in this review; I encourage you to read my launch report of the Scirocco R for more in-depth specifications. The rest of this text shall endeavour to describe the car’s everyday behaviour and usability.

I have no choice but to start with its available colours as my specimen was coated in what a friend described as “sparkly angel vomit” in an animated fashion. Should you disapprove of “Viper Green Metallic”, there are six other colours available. Personally, I’d go for something bright to accentuate the car’s dark bits.

A seasoned VW aficionado, fellow motoring journalist and Scirocco fan gave the paint finish two thumbs up but criticised the one-black-fits-all interior, matt paint on the underside of the bonnet and the use of a cheap bonnet rod instead of the obligatory gas strut.

He also noted what will immediately become evident to any Scirocco R owner or driver: the power of this car is unbelievable for a two-litre. A relatively light steering with good centre-line got the nod, as did the car’s throaty exhaust note, turbo whistle and lightning-fast 6-speed DSG ‘box.

The double-clutch automatic with pedal shifts allows you to zip past 100km/h in 5.8 seconds (our best time was 5.4 with Launch Control) while happily laying down rubber in its first two ratios. Thankfully, the brakes can match the car’s forward urge with immense precision and stopping power.

Last-named provides a button near the gear lever to switch the suspension between Comfort, Normal and Sport modes. In this car with its 19-inch rims and wafer-thin tyres, that basically translates into Barely tolerable, Ouch-ouch-ouch and Solid as a rock.

In order to obtain a decent second opinion, I employed thee most sensitive equipment known to man: a mother. Mine comes in the form of an elegant 1.7m curly brunette with glasses, whose age and weight cannot be revealed for safety and inheritance reasons.

Mother Dearest not only frowned upon the “youthful” paint but the boomy exhaust note, impractically long doors, low roof-line and hard seats. Once in them, they were deemed acceptable, but the Scirocco’s bumpy ride was declared as “far too uncomfortable”. So there you have it – your mother will hate this car.

She will also hate its potential, not just in a straight line. The Scirocco embodies that old cliché “nailed to the road” as the hard suspension allows it to fly around bends at mind-bending speeds. By the time the electronic safety nets engage, you will be going unbelievably fast and all help may already be lost.

The DSG gearbox can be a bit dim-witted at low speeds and in everyday traffic it shifts up quickly to dig into the motor’s 350Nm torque reserves. Switch to Sport mode and it hangs on to gears (what seems like) forever. Switch to Manual, floor it, employ the shift paddles and prepare to lose your license.

In order to get another viewpoint, I recruited Scirocco fan number two in the 1.8m shape of a bubbly young redhead, and took her for a spirited drive around the Peninsula. The hard ride was of no great concern, nor was the attention-grabbing paint hue or growl-pop-growl acceleration of the R.

I realise that I’m reporting on other people’s impressions of the Über-Scirocco, but I agree with all of them. For example: The door-handles, eager climate control, blue instrument needles and good sound system got lots of praise. The boot’s high loading angle got some flak, as did the lack of Bluetooth connectivity.

The price of N$417,885 initiated more mumbling which culminated in a heated debate of Scirocco R vs. Golf R. The results were as follows: the front-wheel drive Scirocco R is cheaper, sexier and more nimble. The 4WD Golf R is more versatile, grown up and planted. The end.