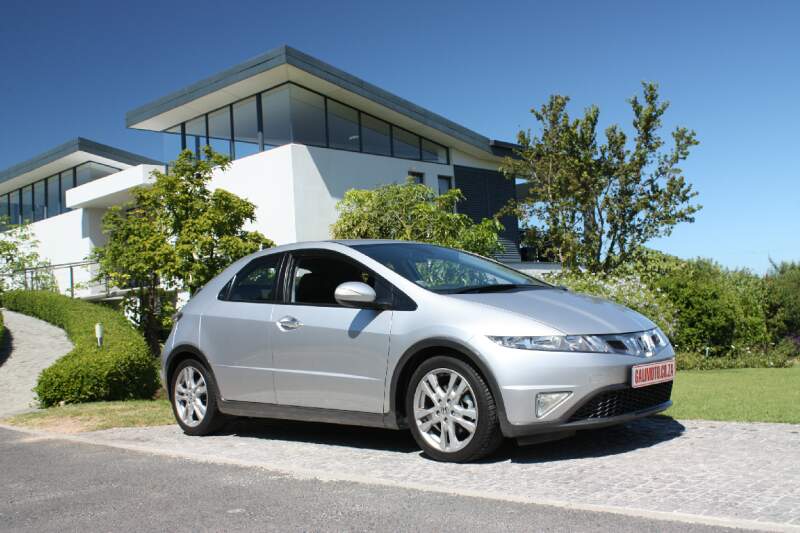 My records allege that I already tested the 5-door Turbo-diesel Honda Civic over two years ago but that didn’t stop me from grabbing the key and taking it home for a week. Nothing much seems to have changed and the four-year-old still looks like an extraterrestrial Mom’s taxi.

A high percentage of my day-dreams are still polluted by the furious trumpeting of the Civic Type-R’s independent throttle bodies but the 5-door version does make more sense than the showy 3-door job. And it probably makes the most sense when equipped with Honda’s Turbo-diesel engine.

Enough beating around the proverbial bush, I’m recycling bits of my previous review by thanking Honda for releasing a car that’s almost identical to the motor show prototype. That never really happens and makes the Civic a little bit unique.

The wedge shape, the numerous creases, that glass nose, the hidden rear door handles, never mind the zany front door handles, the twin-glass tailgate, those triangles everywhere… the Civic eventually extracts a comment from everyone; even if it isn’t particularly favourable.

The door handles caught quite some flak, as did the wonky gear lever with its cheap plastic bubble seat. Rear visibility was an obvious target and a number of guests took repeated stabs at the futuristic dashboard and instruments.

Someone banged their knee on the outer edge of said dashboard and I grazed my back while getting out of the back – but then I did find enough room back there and the rear doors open to almost 90 degrees. So the oddball shape does have its downsides but it is amazing to see how Honda have used it.

Should you have never seen a Civic hatchback dashboard, I encourage you to investigate for yourself as I would run out of space trying to describe it. Your kids will love it. There are buttons, dials, knobs, lights and displays everywhere arranged in a buckshot fashion.

However; after just a few days familiarity sets in and you even get used to the reversed skip and volume buttons on the freaky steering wheel. The air-con, sound system, trip computer, cruise control and other features just require a bit of investigation before they reveal a Honda ease-of-use.

The leather seats are very comfy and supportive, the rear ones fold completely flat, the boot is deep and cavernous, the sound system is crisp if maybe a bit tinny, the instrumentation is unbelievably cool, most glass surfaces are electrically adjustable and the lights / wipers come on themselves.

Insert the key, ignore half a dozen beeps, turn the key and… nothing happens. Huh? Oh yes, far right on the concave cockpit is a big, red, recessed button named ENGINE START. Press and hold to fire up one of the world’s best Diesel engines, as contradictory as that may sound.

The 2204cc four-cylinder common-rail turbo-Diesel engine develops 103kW (140hp) at 4,000rpm and 340Nm at 2,000rpm. The engine is uncannily quiet, smooth and rev-happy for a Diesel and paired with a dry weight of 1,379kg makes for some entertaining performance.

A 0-100km/h time of 8.6 seconds and a top speed of 205km/h aren’t too shabby but only tell half the story – the Civic Turbo-diesel abuses its six gears and torque to produce blissful acceleration, overtaking and fuel efficiency. Average CO2 output per km is quoted at 139g.

Honda claims an average 50ppm Diesel consumption of 5.3L/100km and whereas I didn’t achieve this, there is no doubt in my mind that it is absolutely possible. After a week of driving the bizarre fuel needle was still hovering above half.

During this week of motoring I found the Honda to be comfortable, practical, solid, planted, quiet, brawny, miserly and reasonably nimble. Steering feel is good with only two turns lock-to-lock, the ride comfort is excellent but the road-holding left me with a bitter aftertaste.

Chucking the Civic into a tight bend resulted in immediate and monumental under-steer, but I hasten to add that it felt like a loss of tyre grip rather than suspension incompetence. Even in normal cornering the Michelins would often howl like four schoolgirls at a vampire movie premiere.

Nonetheless, I still admire how Honda blended peculiar looks with everyday usability. I firmly believe that this car will one day become a future classic, much like the pop-up headlight Ballades from the eighties are now. Not exotic or rare, but unbelievably competent and way ahead of their time.