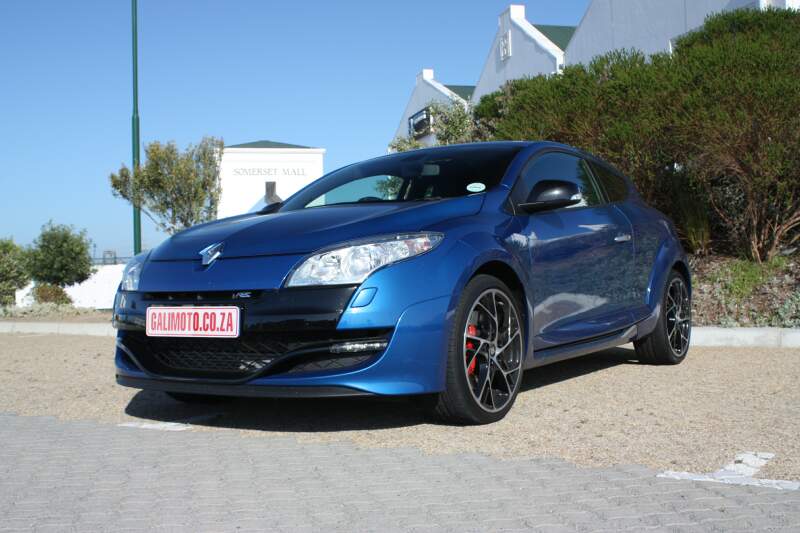 The hardest part about reviewing cars is not the constantly fluctuating garage contents, vastly differing car controls, losing CD’s and ipod cables, chasing after missing sunglasses and house keys, nor the brief confusion in multi-story car parks because you forgot which car you’re driving.

No, it simply has to be the composition of this here text you’re reading now. Getting started has often given me grief, continuation without distraction is difficult, as is keeping within 800 words and thinking of adjectives, clever metaphors and descriptions that I haven’t used before.

Don’t get me wrong, I adore my job and simply wanted to highlight some of its nastier sides; and I couldn’t think of anything clever to start my review of the Renault Megane RS Cup with. Thus I have decided to report on it in a (frankly, new and exciting) daily format:

Day 1. Two chirpy guys drop off a rich blue Megane RS with mean-looking headlights and wheels, introducing it as not only the “Cup edition” but an animal, too. I take their word for it and give the car a quick once-over as they leave.

The regular Megane Coupe is a handsome so-and-so (especially in that copper colour) and the high-power RS version has been given high-power trinkets to accentuate its brawn. Low skirts and bumpers, buckets seats and an OPC / Murcielago central exhaust do the job quite nicely.

After a few hours I get into the rock-hard seat and visit a client. The clutch is equally firm, it feels like stepping on a tennis ball and the steering’s not the lightest, either. This would be a nightmare in heavy traffic. The RS attracts loads of attention and questions. I have no idea how much it costs.

Day 2. I almost forgot about a meeting in Malmesbury and set off in the uncompromising Renault. This gives me a chance to sample it a bit more and the 184kW motor immediately takes centre stage. It’s highly responsive and answers full throttle with slingshot acceleration and a meaty growl.

The precise gearbox beeps just short of the redline, the centre-lined steering wheel is wonderfully accurate and even the unacceptably firm suspension starts making sense out on the open road. The planted handling, that awesome power. It’s addictive. 340Nm of torque help with effortless overtaking.

Stop-go roadworks force me to use the tennis-ball clutch repeatedly and I feel like a big, whiny girl. It’s not that bad and you could actually live with it every day. The climate control’s superb, the sound system isn’t, and the usual Renault ergonomics will take some getting used to.

Day 3. During a quick drive to the shops I get to sample the giant Brembo brakes in favour of retaining a Strand-registered Toyota’s original shape. They squeal a bit in everyday traffic but stop five metres shy of the oblivious and illegal u-turn initiator.

Day 4. Off to Joburg for another launch, leaving for the airport at stupid-o-clock. The lights are sufficient and it does have a bit of torque-steer. Parking at the airport highlights the Coupe’s bad 3/4 visibility and strange keyless entry/ignition system.

Returning home in the evening I realise that the black speedo’s black/red needle is MUCH easier to read at night, when illuminated. During the day, it’s impossible to locate. I like the oil temperature gauge. The yellow rev-counter and tilted instruments are just weird.

Day 5. A cool, wind-still morning calls for performance testing. The three-stage ESP system yields its best result of 5.4 seconds to 100km/h when left on and allowing some wheel-spin on take-off. That’s slightly quicker than a Focus RS. Fuel consumption has now risen from 13 to 13.4L/100km.

Day 6. The umpteenth person enquires about the price. Web-based research indicates N$354 900 for the RS and N$399 900 for the Cup. More than a GTi but with more power. Less than a Focus RS but slightly less sold-out.

Day 7. Time for the RS to go home and I’m considering switching off my phone. I’d quite like to keep driving it. It looks a bit um, duidelik, the ride comfort is unacceptable at slow speeds but the power is fantastic. So are the seats.

A quick photo-shoot is the last time I get to drive the RS Cup. I don’t like the wheels, or the rear passenger and boot space, but quickly realise that these are immaterial. I’m going to miss this thing and assure you that no animals except a few splattered bugs were harmed during the testing of this vehicle.