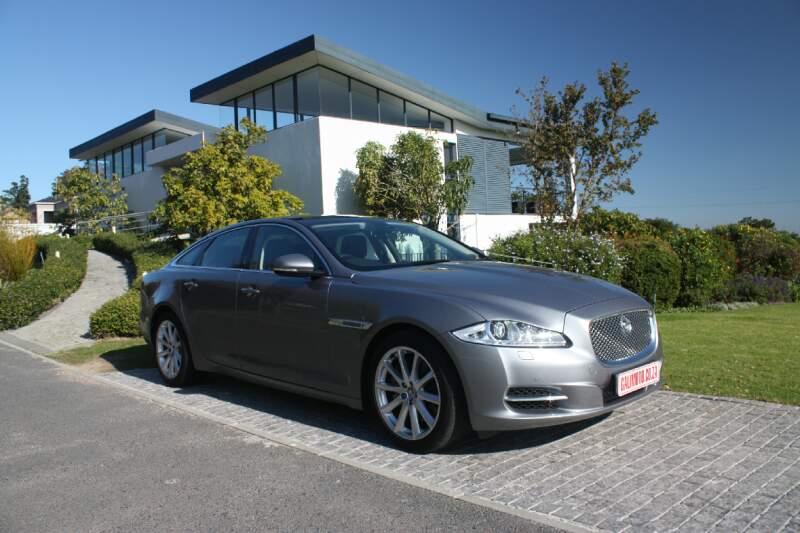 Just like my previous and virgin test of a Jaguar, our new test vehicle left me slightly confused and stumped. The Jaguar XJ has been lauded with praise and welcomed by the automotive world but I wasn’t sure about the extra dose of cool and that huge, elongated bum.

You see, the Ex Jay is one of those cars that split opinions down the middle. Nobody denies its beautifully menacing face, imposing length and profile, delicate window line or stunning 19-inch wheels. It’s the car’s backside that constantly initiates arguments between fans and haters.

I was one of the latter until I (much like an acquaintance promised) finally saw the brute up-close and personal for a few days. Now I’m less of a hater and more of a critical fence-sitter… the bulky derriere is just too long and not proportionate, but it does cut a dashing figure from behind.

The swooping LED lights, electric boot lid, sizable leaping Jaguar emblem, twin flush chrome exhaust tips and concealed panic / escape handle took as much flak as they gained praise. The rest of the Jag, including its interior, was inundated with positive comments.

One tends to forget how sizable this fat cat is, up to the point when you park it next to a Citi Golf or brave a multi-story car park.  Its responsive controls disguise the XJ’s size well but any occupants will quickly discover that they’re sitting in the English version of a Seven Series or S-Class.

A sloping dash houses imposing gloss black and silver air vents, the central ones in their own pod, and everything is plastered with thick leather and delicious stitching. Acres of beautiful wood encompass the cabin, starting with a Jaguar logo at the windscreen and growing into half a tree on each door panel.

Beside the stunning masonry you shall locate plenty more Jaguar logos, shiny metal inserts and door handles, plus the odd high-end loudspeaker from Bowers and Wilkins, or B&W in short. The sounds emitting from these gems are as crisp, clean, precise and amazing as you care to imagine.

Rear passengers enjoy hilarious amounts of space, their own seat heaters, climate control and sunroof. The glass ceiling is split in two with electrically retractable covers, although only the front one tilts open. Up to now it all feels so elegant and grand, so eloquent and Jaguar.

It’s at the front where things become a bit, um, different. Just like the XF, Jaguar endowed its flagship model with tons of gadgets and trinkets, in the process yanking their image into the 21st century by its hair. D’you think I’m exaggerating?

Plonked in the centre of the dash is a gigantic touch-screen multi-function infotainment system whose operation had me and other gadget boys flummoxed for hours. Above the über-clever screen sits thee most garish, bright blue and fake chrome clock I have ever seen. It’s ghastly and completely illegible.

Behind the beautiful leather-covered and button-soaked steering wheel (with a peculiar frontal ridge) sits a full set of digital instruments, a la Range Rover. Starting up and shutting down with a huge Jaguar emblem, the artificial dials are a thing of beauty that display further trip information and even change colour.

Switch to Winter mode and they turn blue as the XJ become decidedly lethargic, click the Sport button and everything turns red as the 5-litre V8 awakes to new levels of dynamism. These buttons sit next to the new Jaguar gear selector knob, two cup holders and a cubby hole finished in gloss black wood and chrome.

The Jag’s ignition and door locks are obviously keyless, the fat key / fob itself is large enough to be classified as a weapon. Press the start button and you’re greeted by an angry bark and impatiently gargling V8 worth 283kW (385hp) stuck to a super-smooth six-speed automatic gearbox.

The heated and laden steering wheel features backlit shift paddles and the gearbox offers an additional Sport mode – which managed the 0-100km/h sprint in just over 6 seconds (claimed 5.7). The vee eight is highly responsive at any revs, wonderfully raspy when provoked and completely silent at cruising altitude.

In other words, the perfect Jag motor. Our test mule alleged an average fuel use of 13.8L/100km during a week’s testing, but I did see 10 and under at restrained highway speeds. The low-profile tyres can produce hard jolts at low speeds, but otherwise the XJ glides along or devours corners with grace and competence.

The twin-Xenon headlights are fantastic, as are the brakes, radar cruise control, navigation, bluetooth and ipod interface. So what about the zeff clock and big bum; this N$1,100,00 Jaguar is incredibly sophisticated and dynamic enough to put a smile on your dial.