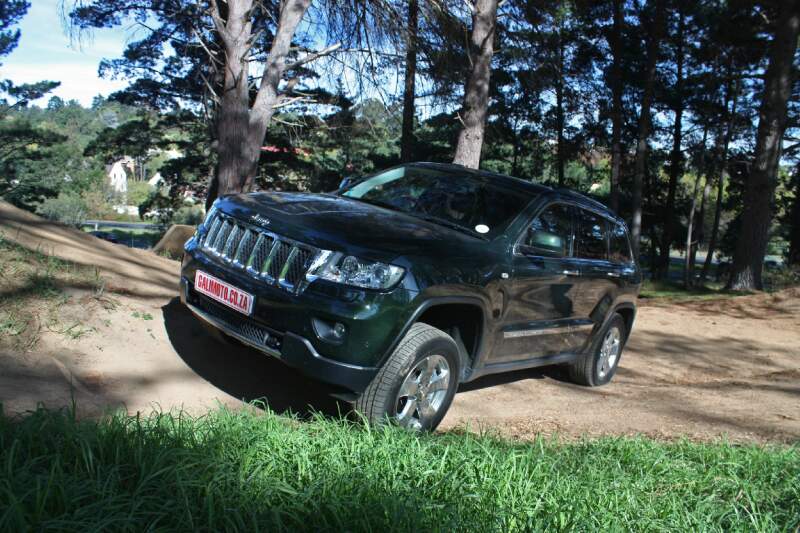 Mere minutes ago I realised that I have an unnerving affection for American cars. Despite my personal preferences, I quite like most Dodge efforts, secretly lust after an old Corvette and regard Jeep as one of the most esteemed badges in the business.

As part of the Chrysler stable, Jeep had to endure tough times after a recent divorce from zee Germans and a spot of financial bother when greedy bankers played musical chairs with dodgy loans. Still ailing from a double-blow, I’m glad to report that Jeep’s product line-up is making a remarkable recovery.

Today’s remarkable product in question is the all-new Grand Cherokee, presented to you here in Natural Green Pearl and Overland specification. Whereas I don’t understand those ugly little soft-roaders, I quite fancy the big Jeep that towers above its legendary Cherokee and Wrangler siblings.

OK, so most of the chrome is fake and the only real deal, the wheels, got plenty of thumbs down from onlookers. Said critics met up with heavy opposition from yours truly though, as I approve of the brash American flavour. The Asians have already gone European, bring on the Yankee style.

Thankfully, the yank’s prerequisite cheap flavour is thinly spread in the Jeep’s interior. The wood inserts look a bit bright and most control surfaces seem oversized, pardon, super-sized, but yet again I would defend this as inimitable U.S. fashion.

Crisp instruments, delicately stitched leather, a comprehensive board computer, double glass sunroof and the Chrysler radio/HDD/USB/ipod/Bluetooth unit add some luxury to the Grand Cherokee while its generous and comfy seats are just as American as the finely-tuned and stupefying loud sound system. I love it.

Next to impress were the four seat heaters, stubborn electric tailgate, cosseting ride and awwwesome V6 engine. Friends and family were just as astonished as I was – the Jeep’s engine is incredibly responsive, unbelievably powerful, exceedingly thirsty and makes a half-decent noise too.

However. Five days into my testing regime, a Jeep afficionado noted that the Overland should be a V8 and the off-road package / chrome 18-inch wheels don’t come with a V6. A quick pull of a lever revealed, albeit caked in dust and mud, the letters HEMI on the engine cover. Twice.

I could blame the new car’s quieter exhaust system, but so great is my humiliation for misinterpreting my favourite cylinder configuration that I not only decided to publish my blunder but also its resulting (self-appointed) punishment: three hours of Gran Turismo and five hours of Top Gear per week.

Back inside the Jeep, those extra two cylinders with hemispherical combustion chambers would explain why the ECO (selective cylinder deactivation) light kept trying to improve my average consumption of 15L/100km. Also, the brutal response and 0-100km/h sprint in 7.4 seconds finally made sense.

That means the 259kW Grand Cherokee is deceptively quick while its light steering translates into a relaxed drive and good turning radius. It can even carve around a few corners with vigourous tyre howl, no thanks to its Sport suspension mode.

Much like modern Land-Rovers, the Grand has a five-stage computerised air suspension setup. Rock, Sand/Mud, Auto, Snow and Sport set the car up for you, while 4WD LO, hill descent and ride height buttons let you try your own combination of off-road tactics.

Our photo-shoot in an undulating forest was no match for the Jeep, it kept going irrespective of what buttons I had pressed. The highest and lowest ride heights are only available at slow speeds, low range and diff-lock are engaged according to your terrain selection (e.g. sand/mud).

That makes the Grand Cherokee a highly competent off-roader and equally proficient tarmac burner; kinda like a Range Rover. The Jeep’s advantage is that it has a marginally longer heritage and at N$637,990 costs exactly half of what the Brit does. Say it with me: bargain.

Perhaps its natural competitor is the smaller Discovery, because most of the Germans and Asians can’t compete with the Jeep Grand Cherokee’s combination of great value and off-road competence. Included in the price is a three-year 100,000km warranty and maintenance plan.

The big Jeep also offers you lots of safety kit, heated steering wheel, cruise and climate control, electric and auto everything, minute slow-speed steering jitters, annoying high-beam assist and 1,030L cargo capacity which can extend to 1,934L. Oh, and there is also a 210kW V6 engine on offer.