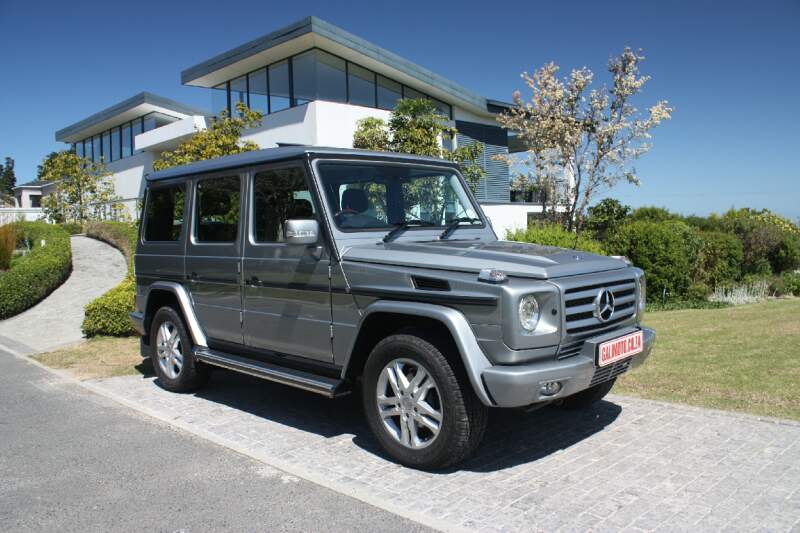 Prepare to meet the definition of the words legend, antique and expensive. I haven’t been so excited about a test car in months and it’s been equally long since I witnessed such diverse and lively reactions to a vehicle, in this case a Mercedes-Benz G350 BlueTEC.

Not to be confused with the supersized GL-Class, the G-Class is what my cousin what call “the original gangsta”. The G (“Geländewagen”, German for cross-country vehicle) was initially developed for military use but introduced to the elated public in 1979.

Square lines, bullet-proof Austrian construction, ladder chassis, low range and three diff locks quickly earned it legendary status and even a Dakar rally win. A few examples made it to Namibia and Southern Africa over the years, but Mercedes-Benz S.A. officially re-launched the G this year – 32 years after its birth.

The reactions this car gets can vouch for its three decades of absence from local shores – most admirers can’t believe that it’s a Mercedes. “But it’s so square? And old.” A tiny percentage of admirers share the same enthusiasm for the Gee as American rap/pop stars: “This is the coolest thing I’ve ever seen…”

Although only available as a five-door station wagon in three trims and engines, at least these combinations represent the widest spread of the range. First up is the utilitarian G300CDI Professional, then comes this G350 BlueTEC, and last but not least is the insane G55 AMG.

See what I meant by expensive? Don’t say I didn’t warn you. Every single cost enquiry earned our G350 test car a gigantic heap of criticism and rejection, usually flavoured with the names of superior vehicles at this price. Think Cayenne, Range Rover and the like.

Unfortunately, I believe the critics were unbelievably wrong and short-sighted; the only hope came from a good friend slash investment banker. He, much like his clients, completely ignored the price and saw the G350 for what it is: a trophy. A status symbol. A third car for your Hermanus house.

The car’s lack of leather was dismissed as quickly as the legendary shape was embraced. Here are a few more things a G-Wagen doesn’t have: aerodynamics, crumple zones, uni-body construction, road holding, cup holders, grace.

The SL/CLK wood ‘n leather steering wheel is electrically adjustable (as are windows and mirrors) and features audio buttons and control of a comprehensive trip computer in the previous-C-Class instrument cluster. The G350 also has cruise control with speed limiter function.

The upright driving position offers reasonable space and the remainder of the cabin is lifted with leather, wood and chrome highlights. Rear passenger leg-room isn’t great but the simple and capacious boot will gladly carry heavy and dirty loads.

A claimed average of 11.2L/100km consumption promises a range of 850-odd km from the giant 95L tank but town driving will quickly see that figure reach the mid-teens. Suburban roads will also reveal the G350’s heavy handling, even heavier steering and surprisingly firm suspension.

Cornering and braking are below par for modern standards but outstanding for a 1970’s relic. Should the sturdy body lumber off its line, the ESP kicks in gently to restrain its urge of ploughing straight through someone’s house. High-speed cruising is typically Mercedes-composed but a bit noisy.

A short off-road trip with low range and all three diffs lit up proved that the Geländewagen has its roots in dirt and could’ve handled much, much more than I dared to throw at it. Wheel articulation isn’t phenomenal and the shiny running boards on our test unit had already taken a knock from previous outings.

A few days earlier, someone shook their head and uttered “I’d never take that thing off-road” and yet again I think they couldn’t have been more wrong. The Geländewagen is a legend. It may be overpriced but it can roll past the haters in a rap video as well as it can trek up Van Zyl’s Pass. It’s incredible.