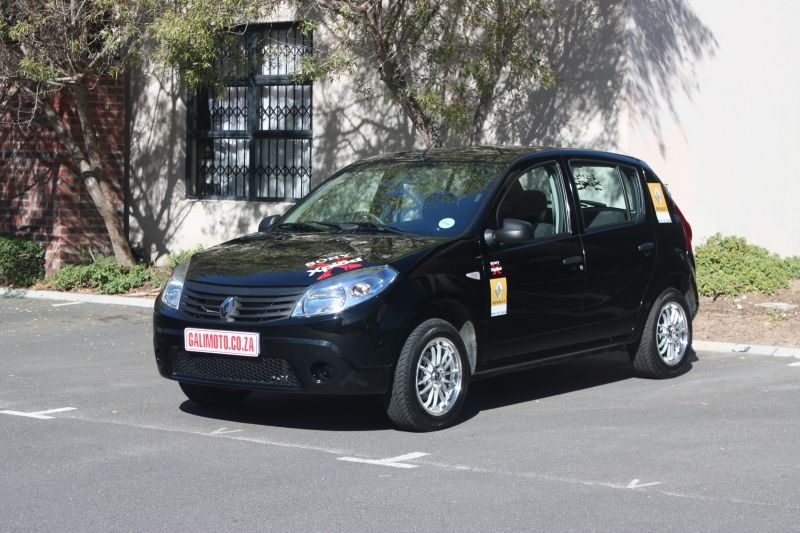 Like most people, I remember my first car well. And like most guys, I happily recall how it was fitted with more loudspeakers than is generally recommended. Renault must’ve identified this niche with their entry-level Sandero and teamed up with Sony to create a mobile disco in the shape of a car.

Being a vain motoring journalist, I’d like to think that Renault read my review of the Sandero 1.4 where I suggested that the affordable car with its single-din radio slot and old-school parcel shelf would lend itself well to an aftermarket sound system. You know, like, a few woofers and amps and stuffs.

Sony did just that and added some stickers for good measure. The black Sandero press demo I drove was plastered with Sony, Xplod and Renault stickers but much like the equally niche-orientated Terios Diva, I assume that customers can order their new cars minus all the attention-seeking artwork.

These less-than-subtle stickers tell the world that your car is jam-packed with yummy audio hardware so should you inexplicably like all the vinyl additions, may I suggest fitting an alarm to the vehicle as well? As was the case with my first boom box on wheels, this system represents a sizable chunk of your paycheque.

I won’t elaborate on the rustic Sandero too much as I believe most people will be more interested in the doef-doef contained therein. So – after driving the sub-B Renault contender for a week, I reconfirmed the following attributes of the N$109,900 Sandero 1.4:

You get a lot of car and space for you money. It’s easy to drive and simple to operate. The interior is a bit flimsy and the wipers are on back-to-front. Its ride is utterly comfortable and not at all sporty; just like the seats. The 1.4 engine is quite economical and lively except in fifth gear; and the standard speakers aren’t very good.

This is why Sony picked up the Sandero and dunked it in a tank of taxi noise. The sound quality isn’t overwhelming but the power levels certainly are, thanks to a pair of 6×9’s, a pair of bizarre subwoofers in a custom enclosure, some amps and other trickery professionally installed into the boot.

There’s enough space left for two small suitcases or shopping of the non-fragile kind but protective speaker grills wouldn’t have gone amiss as these woofers already bore battle scars. The co-axial six-by-nines could also be mounted under the parcel shelf to hide any evidence of a monster system.

And a monster it is – put in some decent house or fresh dubstep, crank the volume and watch the rear-view mirror shake everything behind you to pieces. Forget about hearing the engine, indicator, passenger(s), emergency vehicles or anything else for that matter.

My biggest gripe is with the head unit but I hasten to add that it goes beyond this specific model or Sony. Almost every aftermarket radio/CD/DVD is as ugly as it is confusing. Kitsch fake chrome, flashy displays, ridiculous button positions and useless features seem to be the blueprint for a modern head unit.

They’re all hideous, annoying and stupid. This Sony is no different but I offer the Japanese giant this in return: a few years ago you manufactured a series of radio/CD’s with tilt buttons on either side and multi-function keys under the display – those were as sensible as they were comprehensible. Build more of them, please.

I guess that’s my cue to admit that with maturity I’ve come to value quality over quantity but there’s still something idiotically satisfying about listening to your favourite songs at nightclub volumes with your clothing, inner organs and neighbours’ tempers vibrating in unison with the bass-line.

We couldn’t confirm the exact price of these deafening toys at the time of printing but expect to pay around N$3,700 for the hardware and N$1,500 for installation. They may lack the finesse of those posh double-barrel name systems in fancier cars but the proverbial bang-for-you-buck is well taken care of.

The variety and intensity of aftermarket sound systems proves how big this market is and the crazy sound in this Sandero made me look forward to every single journey. It may be anti-social but it brightens up an otherwise boring car, which is why I think Renault and Sony have a winner on their hands.

Make mine a red one but hold the stickers, please.