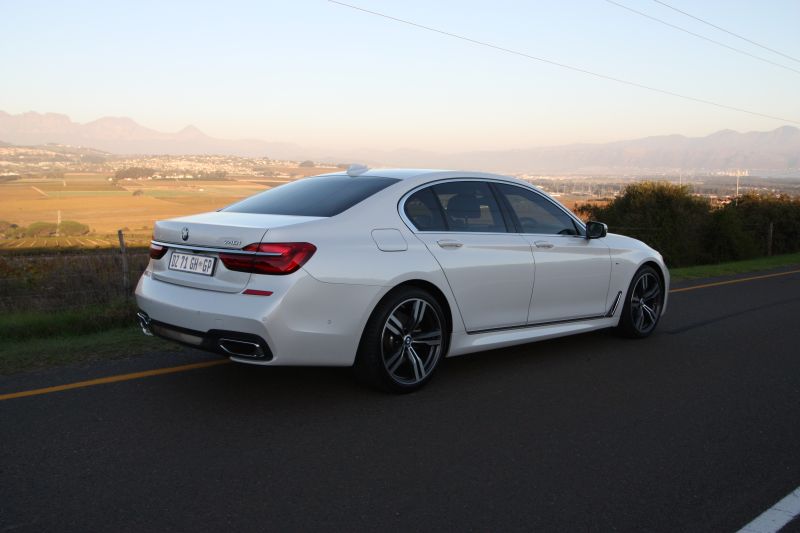 Being a motoring journalist isn’t the easiest job on the planet, especially if you have to review a car like the new BMW 740i. Boo-hoo-hoo, I hear you think, poor wittle motowing journalist complaining about how tough it is to give an opinion on a one-point-five million Rand luxury sedan.

Well, it is quite difficult. Explaining every feature of this space ship would take a few hours so if my concise edition doesn’t do the car justice, BMW won’t give me another one. And if I get it really wrong, nobody will publish my article and I’ll end up on the street. Your street. Washing cars without permission.

To prevent this from happening, I’ll jump right in by telling you that this is the sixth generation of BMW’s biggest sedan, launched in 1977 to finally give the Mercedes S-Class something to think about. Audi pitched up at the party even later with their A8 flagship but in most markets, ours included, the Merc kinda rules.

That doesn’t mean this BMW is a useless competitor – quite the opposite. Like an Audi A8 – which I’ve also had the privilege of driving – it provides a refreshingly different and sporty alternative to the Merc. Personally I think the BMW is the most exciting of the trio. A8 and S-Class are tamer and more understated by comparison.

I’d also apply that to the interiors. All three German mega-sedans offer exceptional space, luxury and technology but in the Bee Emm it appears to be more obvious. I’d swear it also has more buttons and these get one of my few criticisms – most are silver and quite shiny, thus almost impossible to decipher.

Our press car from BMW was coated in a pearly white paint which also covered an optional M-Pack. This makes your 7-Series look and feel sportier without wings, fins or other such ostentatious nonsense. Inside, someone had selected Mocca brown leather to cover most surfaces. It looked absolutely exquisite.

Having recently celebrated their 100th birthday, BMW shows no sign of stopping their automotive progress. A perfect example of this was the 740i’s engine which – despite the badge – was actually the Bavarian firm’s legendary 3-litre turbo-petrol straight six. In this application, it churns out up to 240kW or 450Nm.

Once again the motor amazed everyone with its trademark sound and punchy response over an incredibly wide power band. This flows via a superb eight-speed automatic gearbox to the rear wheels, while a 3-way drive mode selector offers highly distinctive modes from the fuel-saving Eco Pro to a rather keen Sport mode.

These settings will also change the look of the digital instrument cluster – which can keep you busy for days – as well as the efforts of an adaptive air suspension. The 740i’s ride is supremely comfortable, even with the somewhat rumbly low-profile tyres; but it can also hustle around corners thanks that Sport mode.

We even found a launch control system and recorded a best 0-100 time of 5.36 seconds – a smidgen faster than BMW’s claim. Other things I desperately need to squeeze in here are that you also get a long-wheel-base and two other engines: a turbo-diesel six cylinder and turbo-petrol V8 with equally confusing badges.

BMW innovations include the latest iDrive infotainment system with built in cellular capabilities like traffic and live map updates, weather, internet, concierge and emergency services. You may command it via buttons, a touch-pad, voice control and even gestures – turn your index finger in front of it to change the volume.

We also discovered auto and powered everything, massage and exercise options for most chairs, ambient lighting and perfume options, head-up display, a N$75,000 Bang & Olufsen sound system worth every single cent, incredible BMW laser headlights and a rear infotainment system with two tablets and a portable mini-tablet.

Please note that some of these are optional extras and you may order even more sci-fi goodies for your Seven. It’s already got a self-parking function as well as a chunky smart-key with touch-screen but for a little extra, BMW will combine these two. That’s right, you can alight from your car and park it remotely.

I’m not done explaining yet but we’re running out of time. Did I mention the self-steering magic and adaptive cruise control with stop/go function? Using these two simultaneously means the 740i can actually drive itself – something I tried for a few short moments until my nerves gave in and I had a Skynet moment. The machines are taking over.

I hope this serves as a decent summary of the new BMW 740i because, trust me, I’ve left out more than half its features. What I can confirm with absolutely certainty is that the Seven Series has caught up to its rivals again in terms of design, luxury and innovations. Oh yes, and one last thing: happy belated birthday, BMW.