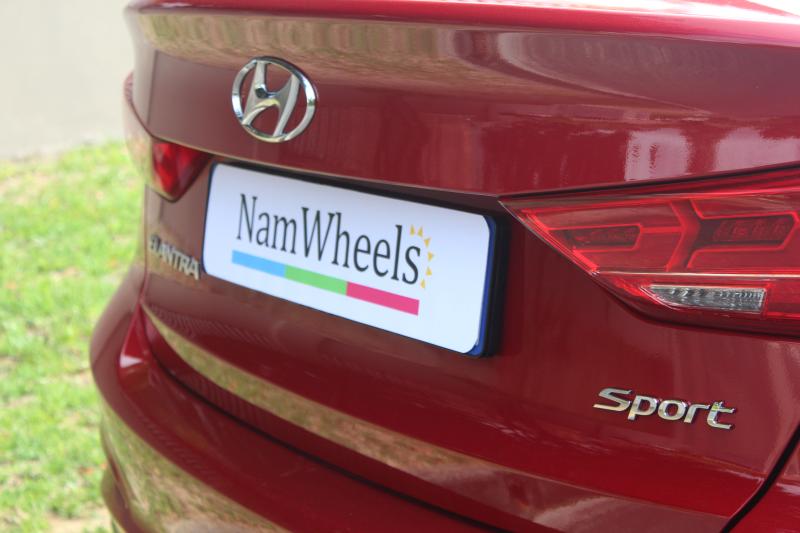 Not too long ago, things looked rather different on our roads. Only farmers and plumbers drove bakkies, Moms would zip between extramural activities in Kombis or station wagons, nobody had heard of crossovers or hybrids and occasionally you’d see something which is now almost extinct: a sports sedan. 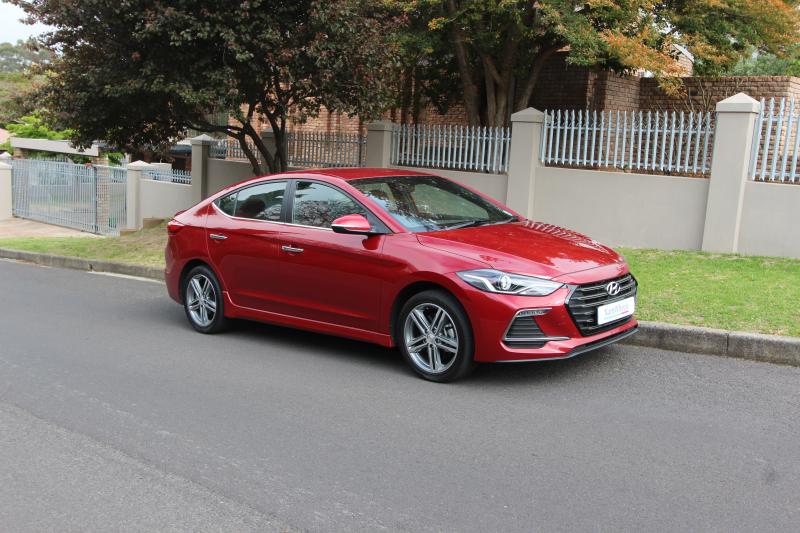 Why almost? Because Hyundai has just revived what used to be one of my favourite car categories: a compact to medium-size saloon with a big boot, fearsome engine and nippy handling. Often these athletic attributes had been borrowed from a related hot-hatch model which the saloon shared its platform with. 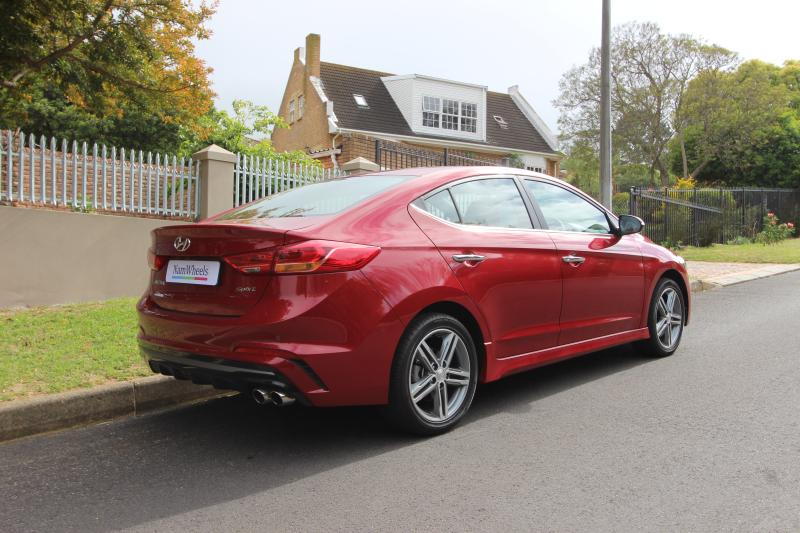 D’you want examples? Jetta CLi, Jetta VR6, Corolla RXi, Sentra STi were (mostly) also available in hatchback form and while the subject of this review – the new Elantra Sport – does not have a slant-back relative on our shores anymore, quite a bit of its oily bits have been borrowed from other Hyundais; like the Veloster Turbo. 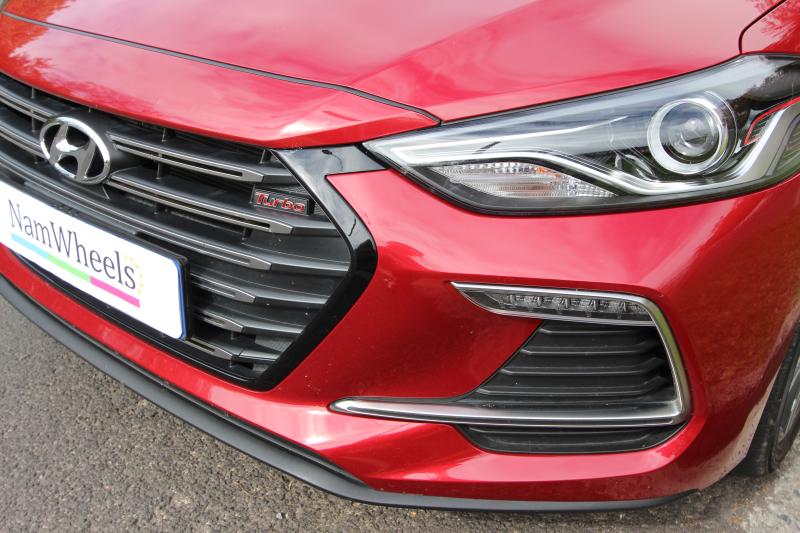 I don’t want to spend too much time on the demise of sporty sedans but I blame two culprits – the ever-crazier hot hatch race and our bizarre urge to drive SUV’s in town. Practicality probably played its part too as a sedan doesn’t take as much junk in its trunk as the two aforementioned cars. 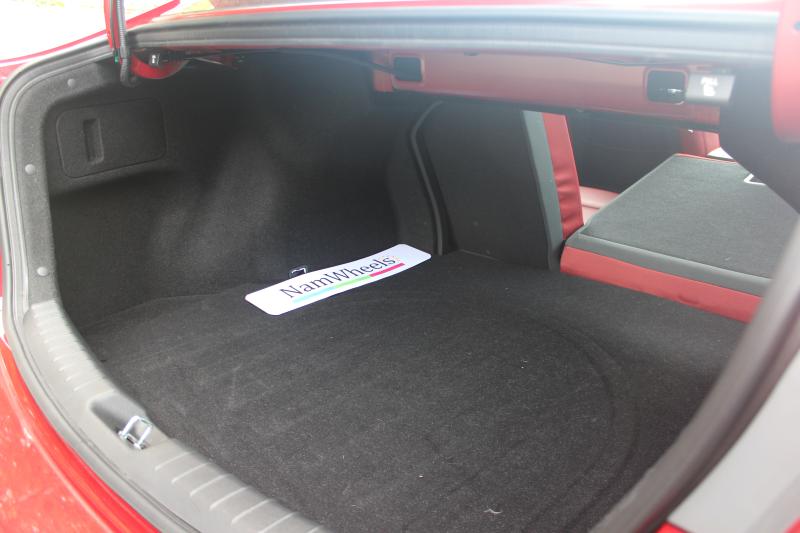 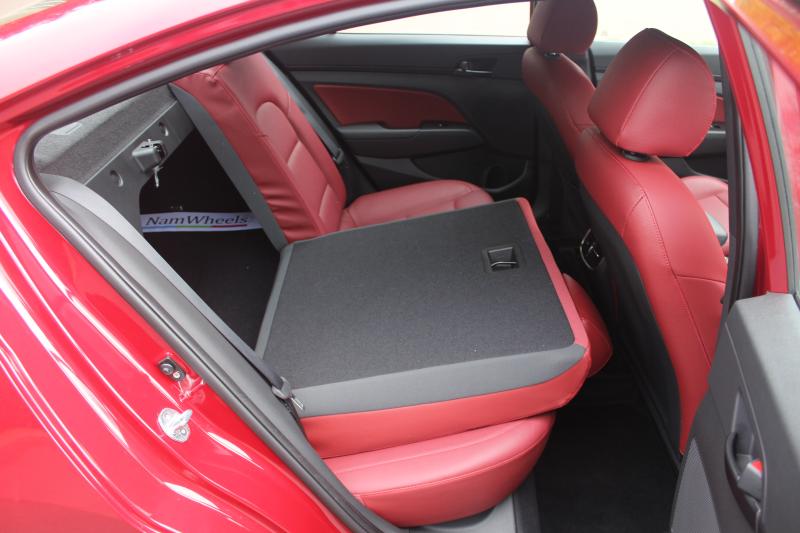 That typed, if a sedan has folding rear seat-backs, you’d be surprised what it will swallow. My own sports saloon (there you have it – I’m a fan) gobbled up two Wine2Whales bikes and gigantic bags with only minimal prodding and shoving to load everything. Although I did pick up a puncture on the dirt roads… 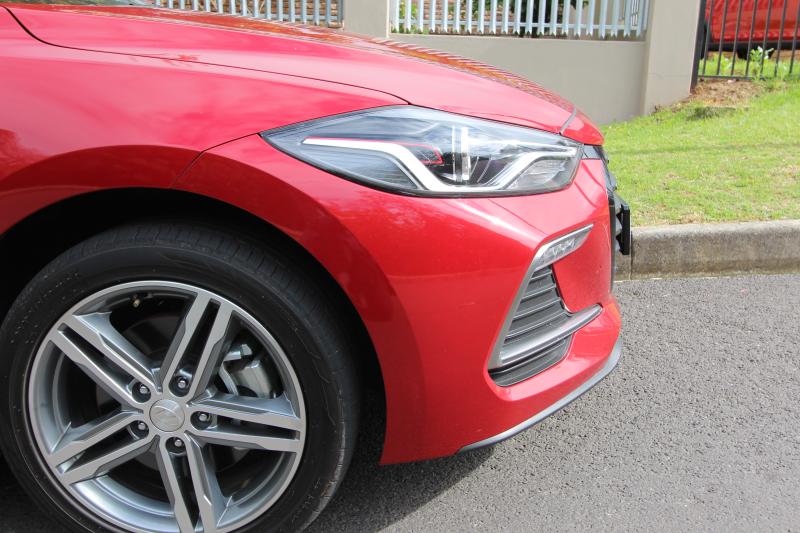 In all fairness, that could’ve also happened to a hot hatch or sporty SUV’s with preposterously low-profile rubber. Speaking of which, the Elantra Sport rides on sensible (and readily available) 225/45R17 tyres. This finally brings me to describe what this car feels like to drive. Sporty and exciting with a fair degree of comfort. 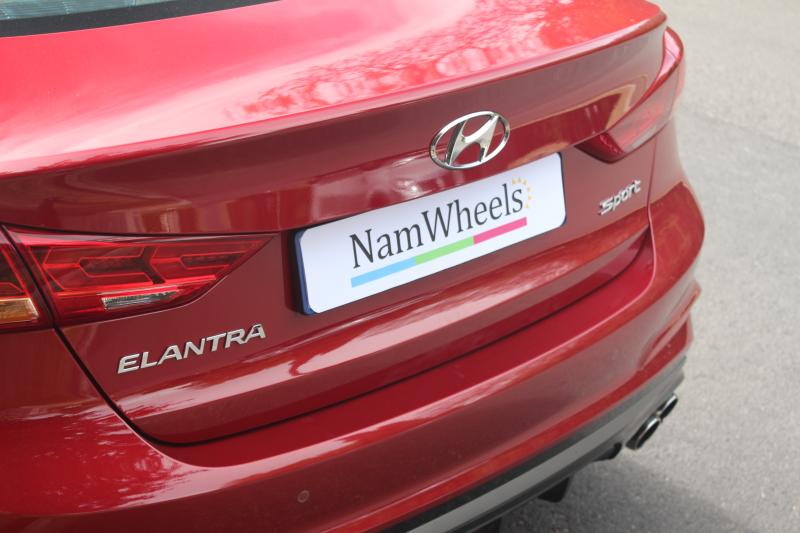 You could accuse its looks of similar attributes as I found that its go-faster make-up was tastefully applied without overdoing anything. Some people weren’t too sure about its bright red leather seats with matching door inserts but I ignored all the haters; it’s an absolute highlight of this car and I wouldn’t want it any other way! 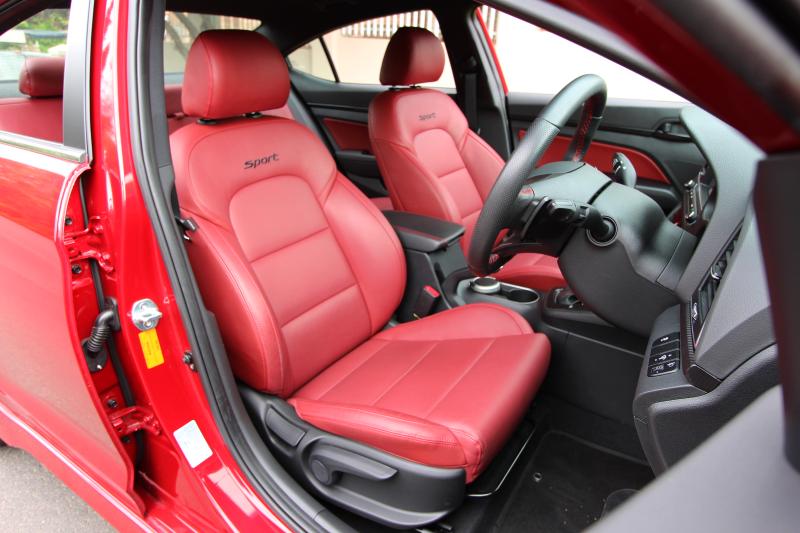 The rest of the cabin is well-laid out with pleasing materials, modern displays and impressive technology. The infotainment system isn’t always intuitive but I’m sure it will be to anyone spending more than a few days with this car. Perhaps they’ll also notice that the plastic-like headliner reflects voices and sounds. 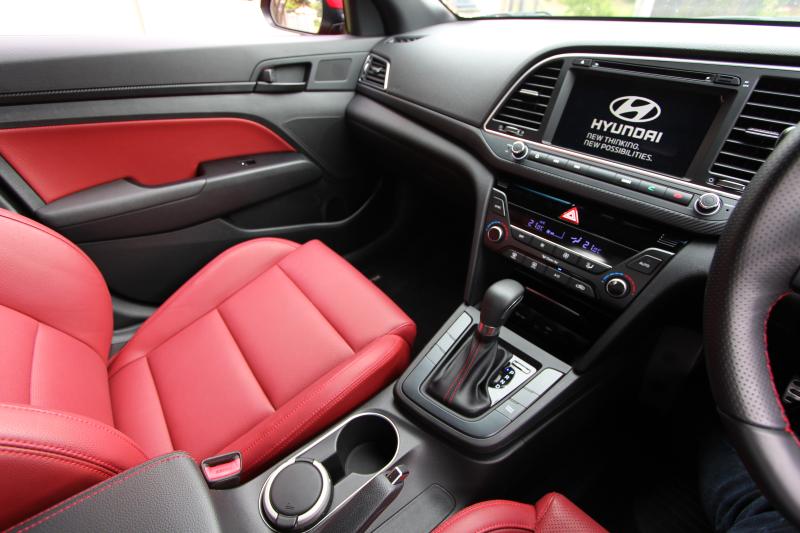 Climate control, trip computer, oddment space, charging options, media and phone connectivity all got thumbs up from me but the biggest praise is reserved for the engine. The Elantra Sport uses Hyundai’s 1.6L turbo-petrol four-cylinder with up to 150kW or 265Nm claiming 0-100 in 7.7 seconds and a 210km/h top speed. 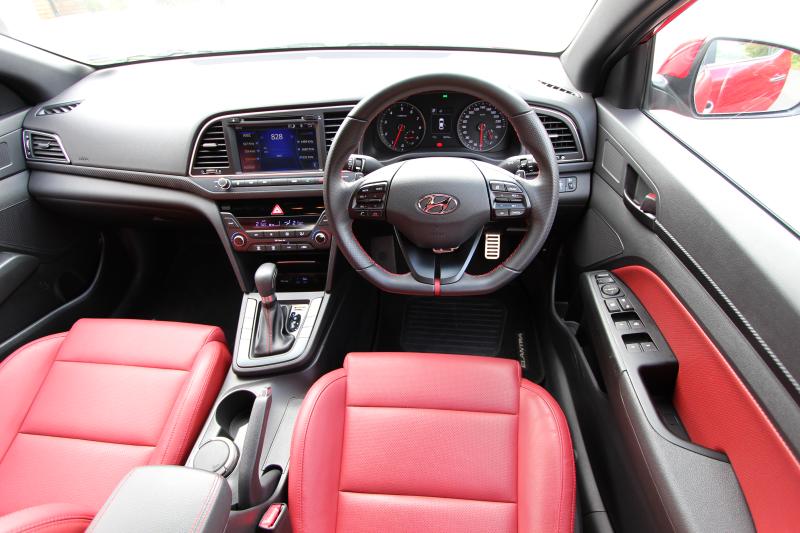 Much like fellow motoring publications, our performance testing revealed much better performance; and a mild launch control. The best of four 0-100km/h runs yielded 6.6 seconds but I’ve seen results in the low sixes too… which means that either this press car is extremely well driven in or Hyundai is pokering with its performance figures. 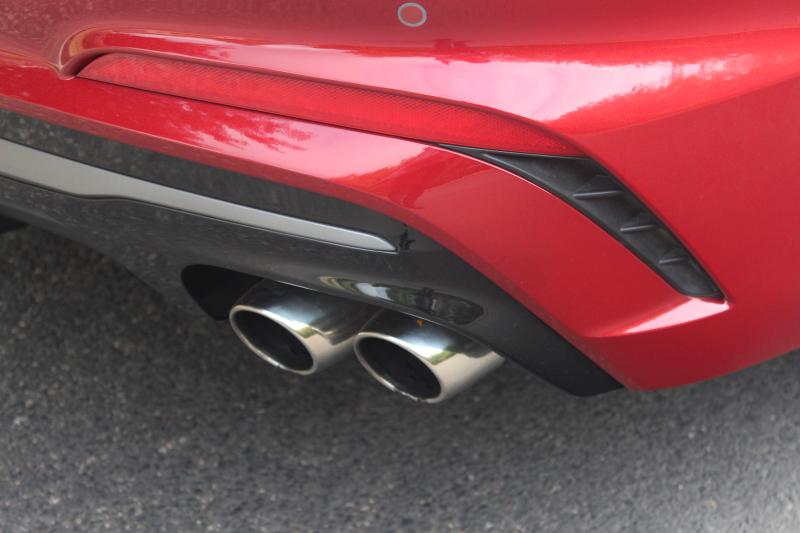 Although it certainly didn’t hamper all-out progress, I found the dual-clutch automatic gearbox to be of the non-sporty kind when driving normally or at half-throttle. Like every other DCT / DSG it seems incoherent at parking speeds but unlike earlier Hyundais with this ‘box, there’s enough power to overcome most of that awkwardness. 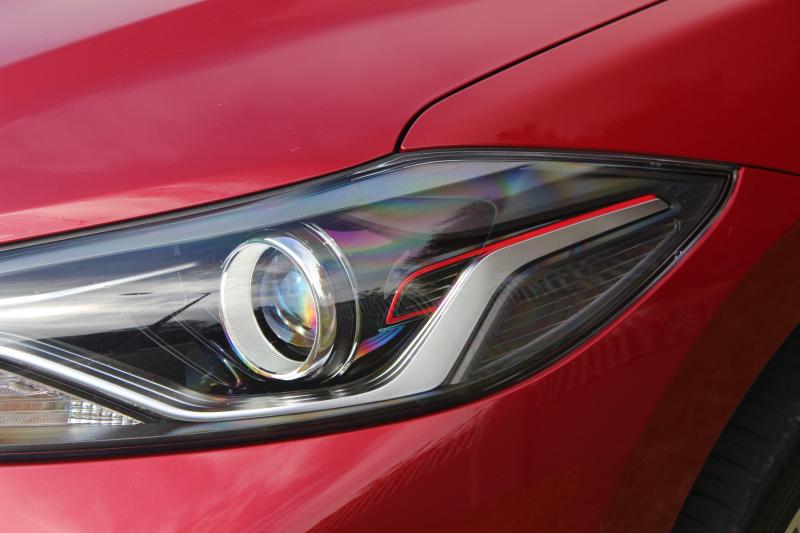 Elantra Sport even offers an Eco or Sport mode (and shift paddles) to take control of proceedings yourself which I happily did from time to time in order to exploit this engine’s excellent mid-range clout. Another benefit of modern turbo power and clever cogs is reasonably good fuel consumption, especially when driven sensibly. 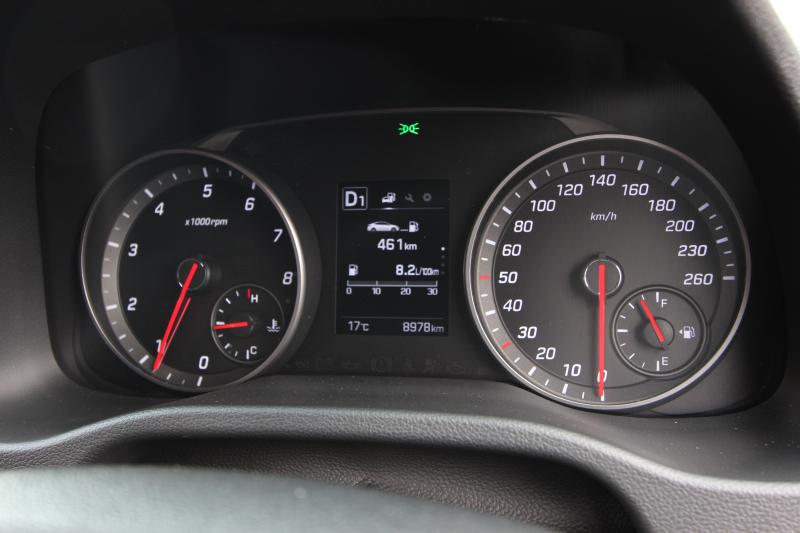 Hyundai claims average use of 7.9L/100km from the 50L tank which means that I was thrilled with the 8.2L/100km my decidedly erratic driving style produced. Other notable features include a generous 458L boot (with folding rear seat-backs) and a temporary spare wheel with moulded tool kit and jack. 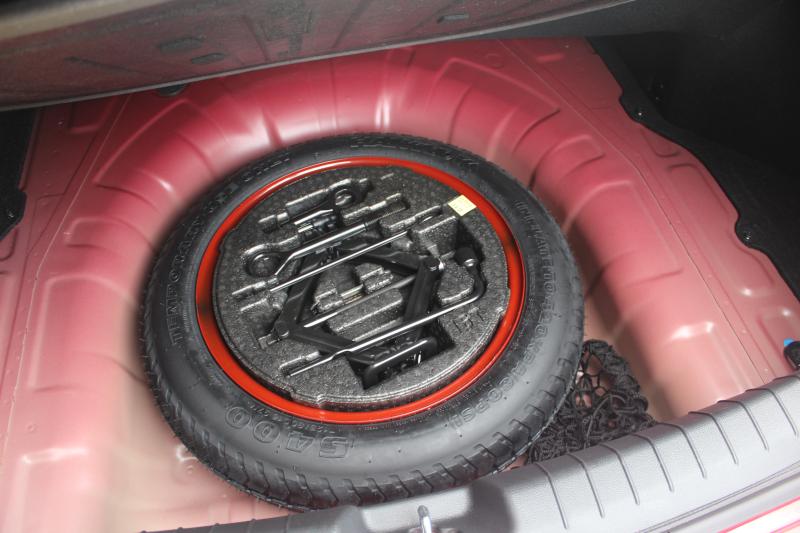 After making friends with its gearbox (sort of) the Hyundai Elantra Sport crept into my heart with its excellent performance, good ride, cool looks and great features. It shot near the top of my Cars of the Year 2017 list when I heard its price of roughly N$400,000 including the manufacturer’s enormous warranty and generous 5-year/90,000km service plan. 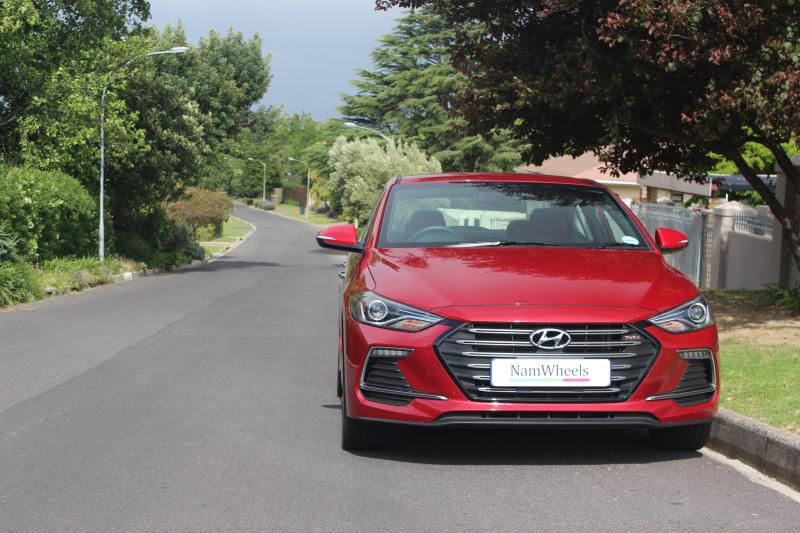 I can’t fathom why this niche fell out of favour, it is so rewarding to drive a compact four-door with some fire under its backside. Hyundai can smile all the way to the bank because not only does the Elantra Sport lack any noteworthy competitors, it is also a superb sports sedan!