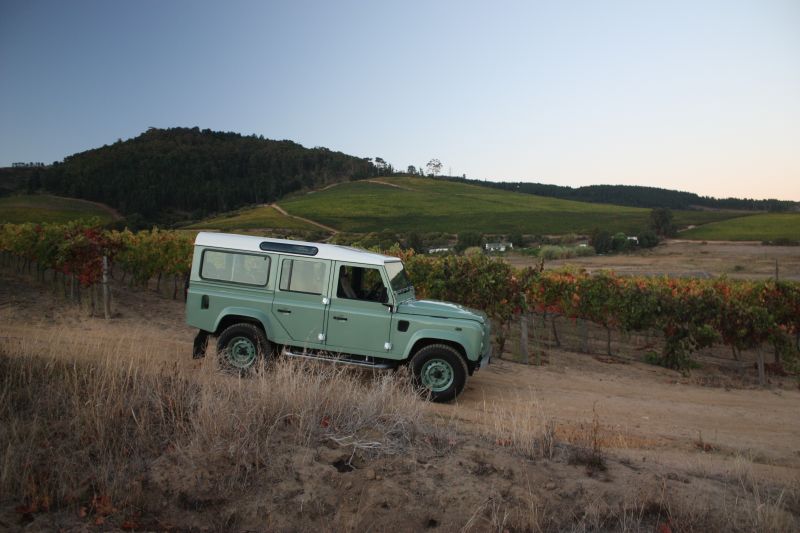 This review should be one of the easiest and shortest texts I have ever composed but the vehicle in question evokes such vastly differing emotions (also for yours truly) that it threatens to bloat my report into novel proportions. You see, I’ve just spent a week driving Land Rover’s Defender 110 Heritage Edition.

As a motoring journalist I should tell you that Defender production stopped in December 2015 because the old Brit failed so many safety and emissions tests that Land Rover simply had to pull the plug. Its construction is also incredibly outdated and so backwards that one should actually type “good riddance”.

However. Instead of ending my review after a few sentences about this last-hurrah model, I have to confess that I’m extremely fond of the Defender; and even owned one for a few years. That means I’m one of those crazy people who will put up with the apparent reliability issues because I like these boxy brutes.

Over the years I have also developed a love of Land Cruisers and Geländewagens – two positions on my automotive wish list and perfect examples of what would happen if someone had built the Defender properly. So what made me shift the Landy above those two and put up with its fabled nonsense?

Well, I’ve typed this before and happily dispense it at the countless braais where Landy-bashing slots in between wannabe rugby refereeing and Toyota adoration. Yes, they are quite moody but in the six years I owned my Defender, it left me stranded once. In the same period, my German sedan broke down twice.

There is a degree of truth to the insufferable jokes…

There is a degree of truth to the insufferable jokes about bus schedules, heated rear windscreens and free dogs but the hard reality is that while Defenders almost always have niggles (usually the moody electrics) they very seldom break down completely. And if you’re handy with a toolbox, it won’t be for very long.

“So why do you buy an unreliable car?” is the favoured response to which I either answer “Harley Davidson” or “Alfa-Romeo”. Just like a Defender, these are outdated and/or inferior products which should’ve been culled by the competition decades ago but they enjoy a clientele with unmatched passion for the brands.

I’ve typed this before – if you crave a Defender (or Alfa, for that matter) nothing else will do. Nobody has ever approached me about choosing between a Cruiser, Patrol or Defender. Same for BMW, Audi or Alfa. They usually creep in closer and whisper “I’m thinking of buying a Defender.” Yes. Yes, you should.

And it doesn’t really matter which one they buy as the only updates since the Defender’s birth in 1983 have been a few engines and small cosmetic changes. To most people, the “Series” models that went before also look similar which is why, to the untrained eye, this 2015 version looks no different to its 1947 grandpa.

To finally describe this Heritage Edition, it is based on the last 2.2-litre turbo-diesel “Puma” Defender 110 and sports many nostalgic nods. Chief among these is its flat Grasmere green paint, heavy-duty steel wheels, old-style logos and plaques, two-tone seats and HUE166 badges – the registration of “Huey”, the oldest Landy alive.

The two comfy front seats are separated by a central cubby box with two cup holders and an Alpine subwoofer. This takes its orders from the matching head unit in the “modern” dashboard with A/C and vent controls, a few buttons, grab handles, simple instruments and massive steering wheel with one airbag.

This model also has split folding middle seats and two foldable seats in the cargo bay which can thankfully be removed for extra stowage. The spare wheel still obscures what little rear visibility there was, most hinges are exposed, the horn isn’t where you expect it and the carpets look like the hardy variety.

One female passenger bemoaned that Land Rover had still not fitted a passenger vanity mirror but had to back-paddle quickly when asked why you would need that in the Kalahari. Which brings me to this car’s ideal purpose – the great outdoors. This is where it wants to be and frankly, it’s where it belongs.

Driving this Defender around town is a nightmare. The gears are too short, the clutch is too heavy, those chunky tyres make an unholy racket, the turning radius is awful and its road holding is abysmal. There’s not much room for your right shoulder unless you open the window, leave the city and hit the dirt.

Honestly, a Defender is drawn to dirt; despite its dodgy insulation. I tackled a Stellenbosch mountain for our photo shoot and everything suddenly made sense. Everything seemed right. My wanderlust wife recalled how we used to give our Defender mud baths to make it prettier; until the hooter and wipers failed.

To prevent this text from growing even further, I’ll have to start summing up here. The Land Rover Defender is outdated and stubborn. If you don’t like them, puh-lease don’t buy one and keep telling the same jokes. If you’re lusting after one, prepare to get some exercise around town and invest in simple tools.

I suggest moving quickly to score one of these last ones, despite their N$730,000 price tag. One of my close relatives – who has a severe Land Rover affliction – bought two of them. Why? Because this legendary English grouch has finally died and, like every Defender owner before him, he just couldn’t live without them.