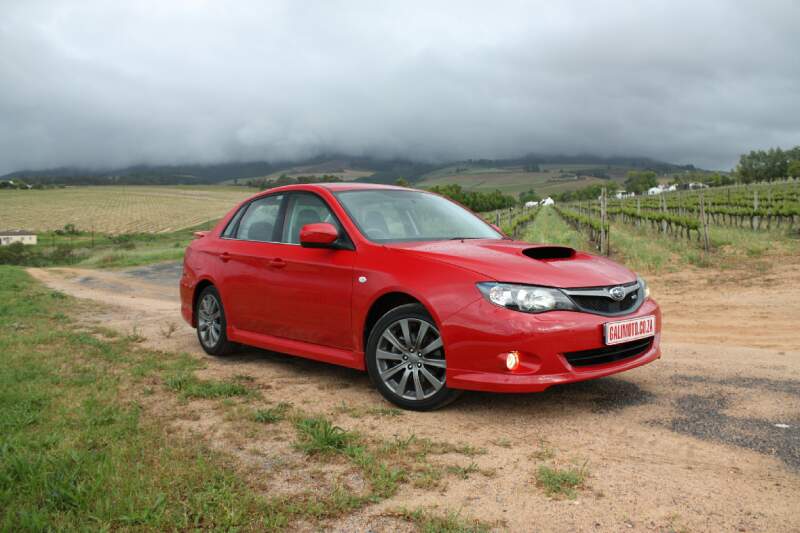 Bargain of the decade

There aren’t many things I’m scared of, but the list just grew. Right behind Tequila, cameras in bushes, spiders that are bigger than my shoe, and any building named “Dentist”, comes the Subaru Impreza WRX.

One of the reasons it gives me sweaty hands and a dry throat is that I always reasoned 200kW (or 275hp) is more than enough in a car, but the Impreza WRX’s 195kW gave me a proper, proper fright.

It remains the unseen danger of every Subaru with a boxer engine and whistling turbo-charger: they abuse the symmetrical all-wheel-drive system to completely and unashamedly embarrass more powerful cars. And it just gets worse when the road starts showing bends.

But let’s rather start at the beginning, with the new 4-door sedan shape of the Impreza WRX. The family car recipe is the latest incarnation of the Impreza, after it changed its hatchback form every year or so. This is now solely reserved for the lunatic STi derivative.

If you manage to ignore the wings and axe-murderer slashes on our blood-red test vehicle, the Impreza is just another modern rental… pardon, family car. The WRX with its extra bodywork, fins, cuts, fat exhaust pipes and dark grey wheels makes damn sure that nobody will mistake you for a lost tourist.

The Impreza WRX is one of those cars that make it abundantly clear that there’s a beast lurking under its bonnet. Look, look; it even has a massive air scoop to feed fresh air to the monster. “That’s not a real intake” notes a friend as he inspects my Scooby. A minute later he’s speechless; just under the scoop sits the impatient intercooler.

The interior of an Impreza is reasonably basic, but that’s only if you compare it with cars in its price-class or, Heaven forbid, performance bracket. Shed-loads of black plastics and a few silver accents make up the cabin of the Subaru, the WRX boasting with attractive (and comfortable) sports seats, and a big Kenwood touch-screen 6-CD / mp3 / navigation radio.

Buttons on the fat steering wheel control this big sound system, as well as the cruise control. The basic instrumentation features a huge rev counter with a small speedometer and combination temperature/fuel gauge to either side. Ventilation controls are similarly basic, by means of three easy-to-control knobs.

The Impreza WRX still uses a “normal” key with buttons for the remote central locking and alarm, and said key also seeks an ordinary ignition slot on the steering column. The 195kW Boxer engine begins its day with the horizontally-opposed hammering noises that get any Subaru fan drooling.

With daily use these noises are alarmingly loud, and especially at constant speeds on a highway the droning exhaust music can get somewhat irritating. Enthusiasts will surely not be bothered by this, and anyone else may choose to crank up the good sound system.

Another pleasant remark for Johnny Public is the comfortable suspension. I thought the WRX would be granite-hard and uncomfortable to drive, but it was not to be. The Impreza offers a forgiving and highly acceptable ride to its passengers, and its body also rolled slightly more than I would’ve expected.

Its steering wheel and pedals are light and easy to operate, and the 5-speed gearbox has tolerable manners. Due to its high gearing it will, apparently, run out of revs at 233km/h in top. The new Subaru is surprisingly docile on suburban roads and has plenty of power reserves (or boot space) to slowly cruise to the nearest shopping mall.

But its rally genes wait in anticipation and, if you like, it will instantly transform into a red bolt of lightning. Choose a lower gear, floor it, and suddenly the good torque figure (343Nm) makes way for hysterical acceleration. Its 265 horsepower allow the Impreza WRX to shoot from zero to one-hundred in just 5.3 seconds. Yes, I mean that, shoot!

There’s a noticeable turbo gap, but once the pressurised air hits home, driver and passengers are in for a wild ride without equal. Successive gears slam everyone back in their seats again, accompanied by the Boxer engine’s vigorous hammering and seemingly unrelenting power. Repeat this exercise on a road with twisty corners and most passengers (and driver) will start using foul language.

The Impreza WRX zips through corners as if it was on rails, and will only let go at ludicrous speeds or with ill-timed acceleration. Let’s put it this way: if you manage to get a Subaru Impreza WRX to slide, you thoroughly deserve it!

This breathtaking car starts at N$359 000 and includes a 3 year / 100 000km warranty with a 3 year / 63 000km service plan. Be assured that you will have to fork out at least double to get similar performance from another brand. Last week I found the bargain of the year, this time I believe I’ve stumbled across the bargain of the decade.