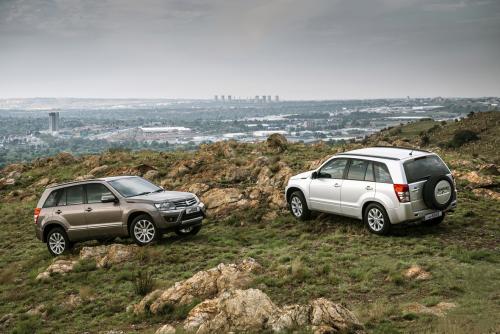 Recently we’ve had a few discussions at work as to the nature and purpose of a few vehicles. Especially snazzy SUV’s have been in the crosshairs, the Mommy 4×4’s which won’t (and don’t) make it very far off road. Just as our debate was about to boil over, Suzuki’s revitalised Grand Vitara entered stage left.

A hushed silence fell. Flaunting its simple and square’ish proportions, the Grand Vitara appeared to be the answer to our burning question. Even more so in this basic “Dune” edition trim level which shuns leather and hard-drive navigation, 20-inch rims, glass roofs and heated power seats.

The Grand Vitara looks like a medium-sized SUV because it IS a medium-sized SUV, not something pretending to be one. After a few of us had taken turns behind its basic controls, we unanimously agreed that it also drives like an SUV/4×4 and feels nothing like a 2-ton pumped-up sports car.

Powering all current Grand Vitara’s is a 2,393cc in-line four-cylinder petrol engine developing maximum outputs of 122kW at 6,000rpm or 225Nm at 4,000rpm through either a 5-speed manual or a 4-speed automatic gearbox. Notice anything? No turbos, no high pressure injectors, no twin clutches.

That means the GV is relatively easy to maintain and there’s less chance of expensive boo-boos. The 3.2L V6 engine has been discontinued and the only other spec level is the more luxurious “Summit” version. And no, we also have no idea what happened to the regular Vitara or if there ever was a Petite Vitara.

Switching between these modes requires twisting a knob to take the car off-road. 200mm of ground clearance, independent suspension, 29° approach and 27° departure angles and an integrated ladder frame easily traversed our little 4×4 test and quicker than more expensive SUV’s.

Typing of which, we had a brief look at or near the Suzuki Grand Vitara Dune’s price segment and found many 2-wheel-drive and 2-litre rivals, a cheaper but weaker (1.5-litre) four-wheel-drive opponent, two turbo-Diesel 4×4’s of sketchy origins and a few more 2WD 2L automatic SUV’s.

In the real world, your decision won’t come down to a few Dollars or Cents and you’ll have to factor in discounts, demonstration models, dealer location and service, as well as personal preference. If you’re looking for a no-nonsense 4×4 SUV though, it looks like Suzuki has its competitors by the short and curlies.

Which brings me to the driving experience. If you’re expecting a smooth and suave urban cruiser, the Grand Vitara will probably scare you away within the first minute of piloting it. The pedals and steering are light and reasonably obedient but the drive train and suspension hark back to its proper 4×4 roots.

This wouldn’t be your first choice to park outside Caprice in a sunset-drenched Camps Bay but it most definitely is the type of car which allows to you jump up before dawn, put the sleeping kids in the back seat, pack some essentials and head for Sossusvlei, Swakopmund and the Skeleton Coast.

While you’re busy playing that epic holiday movie in your head, I’ll quickly slip in a few figures. The 2.4 Grand Vitara reaches 100km/h in 11,7 seconds and a top speed of 180km/h. It claims averages of 212g CO/km and 8.9L/100km petrol consumption while its turning radius is 5,5m and the fuel tank takes 66L.

This car does exactly what it says on the tin…

In closing, Suzuki’s Grand Vitara fills a much-needed gap (not niche!) for affordable, capable, 4×4 SUV’s. Its road manners are a little old-school but so are the ones off the tarmac – and we loved that. This car does exactly what it says on the tin and doesn’t pretend to be anything it’s not. We need more like it.