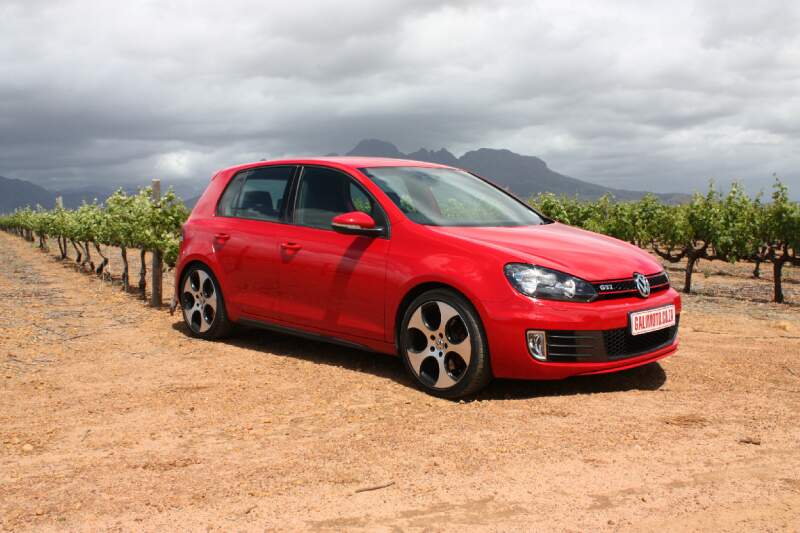 The Volkswagen Golf GTi is often referred to as a legend in the motoring industry, and I got one to visit me for a few days to investigate this claim. The first GTi from the seventies was one of the first “hot hatches” because engineers troubled a city runabout with a performance engine.

The reliable and versatile hatchback suddenly offered unknown performance and incredible driving pleasure, and so the GTi was born. This recipe is still evident in its sixth incarnation; the (already accomplished) Golf 6 uses a 210hp 2-liter turbo-charged engine to morph into a bit of an athlete.

Petrol-heads and enthusiast were astonished to find that the engine remained almost unchanged from the Golf 5 GTi, and then there’s the whole debate about the Golf 6 shape. Some are disappointed in the few changes from the predecessor, some call it a Golf 5 1/2, but the 6 hides a few major improvements.

Its body shape is not a fresh design like previous models; the Golf 5’s balanced form was just freshened up a bit. GTi received a few distinctive features to distance him from smaller siblings, like a honeycomb grill, bigger bumpers, two shiny exhaust tips and the stunning 5-hole 18-inch wheels from its ancestor.

The inside was enhanced with sportier GTi seats, a grippy GTi steering wheel, and a speedometer that displays highly illegal numbers. The rest of the popular Volkswagen cabin is familiar territory to any VW or Golf fan; the layout is uncomplicated, any equipment is easy to control, and everything is perfectly finished off.

Its instruments and central information screen reveals consumption, speed and temperatures, while the steering wheel buttons will also give you control over the sound system. This unit is mounted high up in the dashboard and features a big touch-screen to help you select a favourite radio station, music player (AUX input), or 6 CD’s with music tracks or mp3 files.

This general ease of use also infested the vehicle’s mechanics, with the DSG (double clutch automatic) making the GTi quite easy to live with. It offers you three modes to choose from; a full automatic (or “D”), a tip-function forced manual, or a Sport mode.

Paddles hide behind either side of the thick steering wheel and will hassle the gearbox in any mode, but in full “D” the box of cogs will eventually do its own thing again. Sport mode operates in the opposite way and will often select a higher gear for you to keep the engine revolutions (and turbo) at full tilt.

The eager 2-liter engine is a superb power-plant and delivers impressive torque for daily commuting. As with other double-clutch gizmos you can even enjoy a brief pop from the exhaust pipes when you shift up, especially under full load in Sport mode.

At higher revs the engine sounds a bit tinny, but the resulting performance is nothing to be snuffed at. A GTi will dispel 100km/h in just over 6 seconds and its maximum velocity is a respectable 238km/h. One doesn’t have to torment the engine either; there are always 280Nm from anything above 1800rpm. I was especially astounded by the GTi’s acceleration above 100km/h!

My friends all enjoyed another favourite feature of the new hot hatch: its launch control. Put the gearbox in “S”, switch off the ESP, put your left foot on the brake and stomp on the accelerator. The GTi’s revs shoot to about 3000rpm and it will only take off once you release the brake.

The front wheels break traction and its nose weaves around a bit, but 7 or 8 seconds later you will be violating the national speed limit. And if you need to shed speed in a hurry, the GTi’s ABS brakes will also impress any occupants.

The new GTi is a fantastic performance car, but its strength lies in the ability to also play gently and become a perfectly sensible addition to a young family. The boot is cavernous and cleverly designed, the rear seats fold flat, and all furniture is absolutely travel-worthy.

Its suspension and low-profile tires make for a slightly bumpy ride at low speeds, especially over uneven surfaces, but the GTi makes up for this with a comfortable and predictable ride on the open road.

If you coax it onto a twisty road and drive it like you stole it (and believe me, you will) the GTi will present its final trump card. The steering is precise, the body doesn’t roll too much, and the chassis gives you plenty of advanced warnings that you’re getting a little too brave. In this case the excellent ESP stability control will make its appearance and punish you with clever braking action and reduced engine power.

This excellent vehicle costs N$331 800 with a 5-year 90 000km service plan, and should surely top your list if you are in the market for a modern hot hatch!