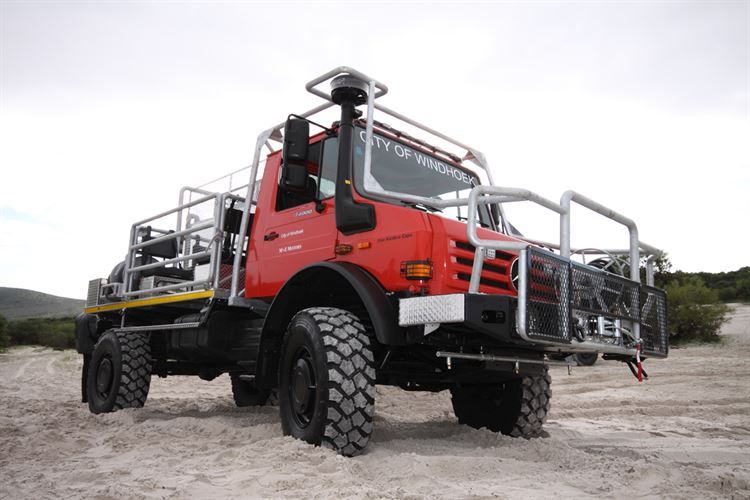 Mercedes-Benz Commercial Vehicles celebrates their UNIMOG’s Southern African re-introduction with the sale of a U4000 unit to the City of Windhoek’s Fire Department. Namibia’s M + Z Motors Commercial Vehicles dealership based in Windhoek last sold a UNIMOG U120 way back in 1983 to the Namibia Water Corporation Ltd., marking this, their latest sale, as a watershed moment in the history of this one-of-kind all-terrain workhorse.

Making the decision to buy a new UNIMOG was an easy one for the City of Windhoek, as the U120 bought in 1983 is still regularly called to action. With an exceptional service history, coupled with its unparalleled ability to go where few others could navigate, purchasing the very latest in technology from Mercedes-Benz was an obvious choice.

After the U4000 chassis-cab arrived from Germany, the super structure was custom-built locally, over a six-month period, with a focus on the vehicle being perfectly tailored for home soil conditions and challenges. In partnership with the Cape Town Fire Department and super structure suppliers Fire Raiders, also based out of Cape Town, the City of Windhoek took their latest pride and joy addition on a road trip last August that culminated in Cape Town.

As an all-terrain vehicle that has a legendary reputation of more than 25 years, the U4000 boasts the addition of a newly designed and fitted central tyre inflation system, portal axles, a working range gearbox as well as a chassis that enjoys 30-degree flexibility amongst other unique features designed around each owner’s requirements.

Before the UNIMOG U4000 could be put into active service, the City of Windhoek’s Fire Department enjoyed comprehensive driver training from MBSA’s Ferdi de Beer, as well as equipment operational training from super structure builders, Fire Raiders’ Ian Newton. Once successfully completed, demonstrations were held on Blouberg Mountain (outside of Cape Town) where fleet owners and local fire departments got to put the U4000 through its paces.

Since the arrival of the U4000, both local fleet owners as well as Namibia’s own local councils, mines and parastatals have all shown renewed interest in the power, versatility and agility of the UNIMOG.

“What sets the UNIMOG apart from anything else out there is the vehicle’s incredible off-road ability and versatility,” Van der Vyver asserts, “especially the chassis design that allows for up to a 30-degree flexible play, making it one-of-a-kind.”

The M + Z Motors Commercial Vehicles team – made up of Divisional Manager Wilfried Sell, Sales Manager Chris van der Vyver, Sales Executive Douglas Thompson and Service Manager Oliver Kayser – along with Fire Raiders Director Ian Newton, all have aided in laying the foundation, through partnership, for the re-introduction of one of Mercedes-Benz’ most powerful and adaptable commercial vehicle yet.

“2010 therefore looks set to be the year that celebrates its real come back as it becomes more and more popular with our niche trade sectors,” concluded De Beer.