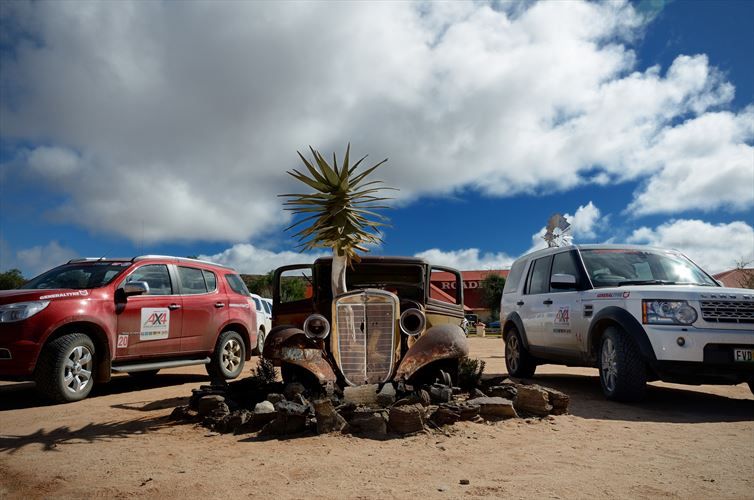 Johannesburg, South Africa, 15 July 2014 – Travelling thousands of kilometres through some of Namibia’s most challenging terrain is not a test that you take on lightly. But the 2014 General Tyre 4×4 African Adventure did just that and completed the tour of some southern Namibia’s most scenic and remote destinations with a convoy of eight vehicles over 11 days.

Seven vehicles were equipped with General Grabber AT all-terrain tyres, while the convoy leader’s vehicle featured the heavy duty Grabber MT mud-terrain tyres – all of which performed impeccably in the extremely diverse range of conditions over a total distance of 5 180 km.

The terrain varied constantly, from fast tarmac highways to rock-strewn dirt trails, from undulating sand dunes to winding river beds – indeed the 2014 expedition had it all. Around 1 635 km, or nearly a third of the route, was off-road, which would certainly test the mettle of any 4×4 tyre, especially over such a concentrated period.

“One of the objectives of the annual General Tyre 4×4 African Adventure is to explore and reveal some of Africa’s best off-road destinations,” says Niel Langner, Marketing Manager for Continental Tyre South Africa.

“It also sets out to test the General Grabber 4×4 tyre range in extreme conditions, and there are few more challenging countries to drive in than Namibia. Despite the tough route, which covered a cumulative distance of almost 42 000 km with all eight vehicles, the Grabbers performed brilliantly and took the entire trip in their stride.”

In tricky conditions that change constantly, you need an off-road tyre that delivers confidence-inspiring levels of traction and safety. And with vast distances between major towns, typically on remote and unpredictable gravel roads, you have to be able to rely on a tyre that provides durability and peace of mind.

“The General Tyre 4×4 African Adventure proved beyond doubt that the General Grabber is a true class leader in all of these areas, just as it did on the previous events in 2013 and 2012. As the General Tyre brand slogan states, ‘Anywhere is Possible’, and we’ve proved it with the exceptional Grabber AT and MT.”

This year’s trip set off from Port Elizabeth on 3 July, and travelled through Upington to the Augrabies Falls National Park on the first day. The convoy then made its way into Namibia via the Onseepkans border post with the country’s vast gravel roads becoming a central feature of the route from the outset.

Following a stop-over at Ai Ais Hot Springs and a visit to the magnificent Fish River Canyon, the group headed north over next couple of days via Betta, Solitaire and Sesriem.

No tour through this area would be complete without deviating off to Sossusvlei to see the astonishingly stark but equally beautiful (and aptly named) Deadvlei, which is surrounded by towering red dunes.

From there it was on through the Kuiseb Canyon to the friendly town of Swakopmund, with its colourful German heritage. The team remained here for the next three days, exploring the region’s abundant natural and adventure-oriented attractions.

The seemingly endless dunes of the Namib Desert were obviously the main highlight of the entire trip, and everyone set off on the trail from Dune 7 Adventures just outside Walvis Bay in eager anticipation.

Over several hours of thrilling driving up seemingly impossible climbs and teeth-clenching drop-offs, they tested the vehicles, tyres and themselves to the limit. Everyone came away enthralled, having gained valuable sand driving experience, as well as entirely new respect for the General Grabbers.

If that wasn’t enough for the day, the convoy then headed to the famed ‘Moon Landscape’ with is mesmerising lunar terrain stretching off far into the distance. This was followed by a superb drive along the Khan Riverbed Trail, with its soft white sand providing a dramatic counterpoint to the towering rock-strewn mountains flanking either side of the track.

The next morning the team enjoyed a drive along the coastline on a permitted beach trail, and then went looking for the area’s abundant birdlife. Flamingos, cormorants, cranes and even a squadron of pelicans were seen feasting along the beachfront, despite the misty and cold conditions.

On day 9, the African Adventure departed Swakopmund for Windhoek along the Trans-Kalahari Highway, with the desert soon making way for typical African bushveld.

Every year, the General Tyre 4×4 African Adventure supports a local community, and this year the nominated project was the Michelle McLean Primary School in Otjomuise on the outskirts of Windhoek.

Continental Tyre South Africa handed over a cheque for N$10 000 (R10 000) to the Michelle McLean Children Trust, headed by the country’s famous former Miss Universe, which built the school in 2000 as a joint initiative with the Namibian government. It currently caters for 920 children from pre-primary to Grade 7 from the local area.

The cheque was gratefully accepted by Fritz Zender, project manager for the trust, along with heads of department from the school, Elize Jankowitz and Hulda Kauari, who indicated that the funds would be used to purchase books and writing materials for the Grade 1 classes for 2015.

“We truly appreciate the donation of the funds, as the Michelle McLean Children Trust relies primarily on the support from local business,” Zender said. “It is fantastic to have Continental Tyre SA including the school as part of the General Tyre trip through Namibia, and making a special effort to support the work we do in Otjomuise.”

Adventure Junkies Eastern Cape, the trip organisers, also delivered clothing parcels that were enthusiastically welcomed, and will be destined for the pre-primary children.

In 2012, the Malambu Middle School near Monze, Zambia received funding for additional classrooms, and the Maamba Mines School in a very remote part of the country was assisted in 2013 with the donation of essential learning materials, sporting goods and Stop Hunger Now food parcels.

Over the final two days of the 2014 African Adventure, the convoy made its way back to South Africa via the remote Rietfontein border post and spent a chilly night at the Molopo Kalahari Lodge in Askham before completing the final 900 km haul to the formal end of the expedition at the 4 Wheel Drive Club of Southern Africa’s Base 4 camp at Hennops River near Centurion.

For more information on the 2014 General Tyre 4×4 African Adventure, view the daily updates and pictures on the GTAA page of the Our Continent website (www.ourcontinent.co.za/gtaa), or on the Continental Tyre SA Facebook page (www.facebook.com/continentalsa).