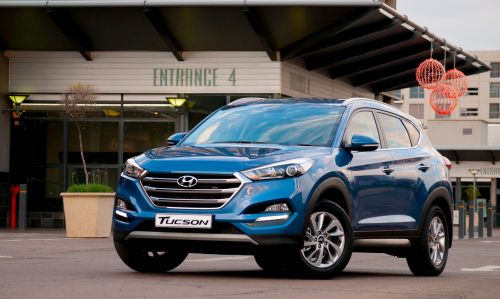 The new Hyundai Tucson has been making quite a few waves since it arrived in our market around March of this year. Besides its double name change from Tucson to ix35 and back to Tucson again for this third generation SUV, it’s also garnered quite a bit of praise from the local media. Chicks dig it.

No really, Women on Wheels awarded the Tucson their coveted 2016 Car of the Year award. Dudes seem to be smitten as well, judging by the favorable comments of the men-folk at the most recent Hyundai launch. This event was held to introduce two important newcomers to the range – turbo-diesel engines.

Good news for Hyundai and not so much for their rivals as the brand was recently voted 35th best (globally) with 6th place in the automotive list and 5th in terms of volume. Since March 2016, local sales figures also show a sterling effort – 20% in the Tucson’s market segment which climbs a further 2.6% with fleet sales.

Carried over from ix35 fame, first up is a 2-litre four-cylinder turbo-diesel with respectable maximum outputs of 131kW and 400Nm. Although its emissions only conform to Euro 2 standards, this trusty unit is mated to a six-speed automatic gearbox and will surely become any suburban parent’s darling.

An even bigger novelty is self-ignitor number two, a brand-spanking new and highly sophisticated 1.7-litre four-cylinder turbo-diesel with new-age trickery like exhaust gas recirculation, intelligent valve control, lightweight construction and state-of-the-art fuel injectors with up to 2,000 bar of pressure.

How much is 2,000 bar? A lot. So much, in fact, that this engine achieves the highly coveted Euro 6 emissions standard. Its outright power of 85kW may be substantially less than its senior 2L counterpart but this little 1.7 produces up to 280Nm of torque from as low as 1,250rpm. That’s a smidgen over idle!

Hyundai let us loose with a whole fleet of 1.7 Tucsons and I teamed up with two co-drivers to give the newcomer a thorough test on highways, congested city traffic and a fair bit of dirt road. Only available with a six-speed manual gearbox and front-wheel-drive, we were suitably impressed by the little motor.

Sixth gear clocks 2,000rpm at 120km/h but isn’t suitable for anything under 80km/h. However, all three of us deliberately chose high gears and low speeds to test Hyundai’s torque claim. While its power is not earth-moving, the engine’s response from 1,200rpm is highly impressive – super smooth and quite linear.

Passenger space and comfort is commendable, the ride is acceptable too as long as you stay away from huge wheels. The 2-litre model is available in Elite trim and Tucson 1.7 comes with Executive specifications which include the usual power-this and auto-that, pleather, as well as multiple driver aids.

Colour and wheel choices get a bit tricky as the Tucson is built at two different factories – the older 2-litre auto in Korea and the super-clean 1.7 manual in the Czech Republic. This also affects one or two interior specifications but at least the default colour choices like whites, silvers and greys are available from both locations.

Compared to their main rivals, the new turbo-diesel models are in the ballpark for pricing with a few extra features here or there. Considering the Tucson’s well-received styling and technical updates, Hyundai has a strong contender on its hands; that enormous warranty and the service plan should seal the deal.