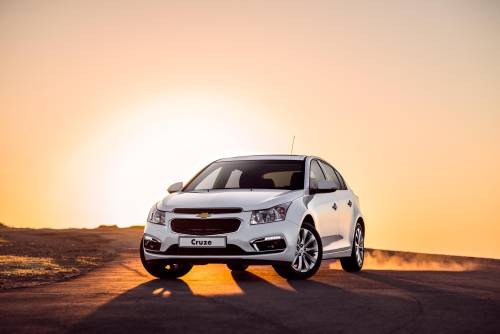 As one of the largest vehicle manufacturers in the world, Chevrolet took a bit of strain after the recent recession yet the American giant was blessed with perfect timing as that coincided with the launch of their new world beater – a passenger car for markets around the globe – the Chevrolet Cruze.

Launched in South Africa around 2009, the Cruze has been sold over 3 million times in 180 countries which equates to one driving out of a showroom every hour. Cruze also clinched the number two spot on Chevy’s top seller chart, just behind their hugely popular Silverado SUV (sold in the USA).

With 4.7 million Chevrolets sold in 2014 and almost half of those outside the United States, cars like the Cruze have become a vital part of the golden bowtie’s arsenal. Aiming to maintain and increase the car’s popularity, Chevrolet has just freshened up the Cruze hatchback and sedan.

Most notable are the exterior changes like a different front grill, smaller bowtie logo, fog lights and daytime running lights in styled pods, new 16-inch alloy wheels (17 available as an option) and the sedan model’s restyled rear end with light clusters reminiscent of the Malibu or other Chevy products.

Its interior remains largely unchained but the biggest news is standard fitment of the MyLink infotainment and communication system with 7-inch touch-screen monitor in all but one model. That car, the 1.6 Sedan, also lacks other niceties and is probably aimed at the fleet or rental market.

Options include a climate control and park assist package, leather seats and sunroof. Chevrolet sends every Cruze into the big wide world with a full size spare wheel, a five-year/120,000km warranty and roadside assistance as well as a three-year/60,000km service plan with 15,000km or one year service intervals.

I only drove 1.4T derivatives on the recent launch and while the crunchy manual is a joy to operate, the new six-speed auto isn’t as boring as one would expect. Quick and smooth in its actions, the automatic Cruze doesn’t offer shift paddles yet the nicely-stacked ratios can be selected via the gear lever’s tip function.

The next surprise was ride and handling, Cruze striking the obligatory balance between sporty grip and comfortable damping – perhaps leaning more towards the latter. All this is underlined by a light steering feel and overriding suppleness to all major driving controls. The Cruze feels refined.

Combined with its discreet looks and quality interior, the updated Cruze can almost knock on the door of this segment’s king –Volkswagen. With Chevrolet’s prices between N$230,400 (poverty-spec 1.6 sedan) and N$272,400 (1.4T Auto), anything below the more expensive Golf or Jetta has a serious contender on their hands.