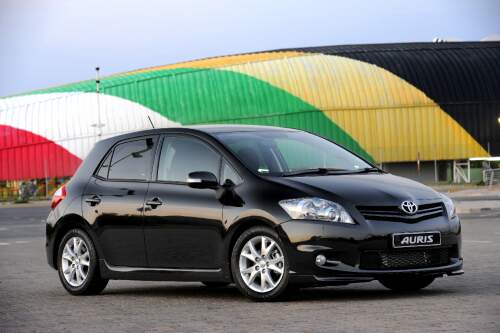 It’s tough at the top and even tougher to stay there – something Toyota Motors South Africa is keen to achieve by giving their product line up a thorough seeing to. Their immediate plan appears to include a dash of excitement and further riding of the hybrid wave.

Perhaps they started alphabetically, perhaps they didn’t, but the often overlooked and underrated Auris hatchback is the starting point for a double-headed assault on sales charts and market share. Cruising in the massive shadow of its RunX predecessor, the Auris was an easy target for some revitalisation.

Not that the platform is completely boring, I approve of the Auris so much that I immediately promoted it as an obvious upgrade when a friend involuntarily destroyed her RunX. But somehow the newer car’s rounded shape, good lines and funky interior didn’t find favour with everyone.

Help has just arrived in two polar opposites: the Auris Hybrid Synergy Drive and the Auris Toyota Racing Development, hereafter referred to as the Auris HSD and Auris TRD. What these two represent in the world of Toyota Auris is the little white angel and wee red devil on either shoulder…

The HSD employs the intricate hybrid technology from Toyota’s pioneering Prius, essentially replacing the normal Auris drive-train with the 1.8L petrol engine and electric motor combo of a Prius. It also shares the same CVT gearbox and the batteries take up most of the boot floor (283L boot space remains).

As everything was just shoe-horned into an existing car, there were no development issues to master; hence the Auris HSD is cheaper than a Prius. This easy transformation made a lightbulb appear above Toyota engineers’ heads, and they are now looking into hybrid’ing more models; possibly all.

Further technologies they are tinkering with or having a stern look at include plug-in hybrids (already available overseas), bio fuels, full electric vehicles (also operating overseas), hydrogen fuel cells and the possibility of Diesel hybrids.

The next hybrid to grace our shores will probably be the Yaris HSD in the second quarter of 2012. Any regular internal combustion vehicles have also been taken aside for a few lectures in efficiency, which resulted in Toyota’s Optimal Drive policy taking effect on five S.A. models since 2009.

But back to the Auris HSD, which differentiates itself from other models with the trademark hybrid jewellery like blue logo and blue lights. The hatchback is available in two trim levels – XS at N$267,200 and XR for N$289,800. TMSA aims to sell about 25 a month.

The upside to their hefty presence is that they complete a full circuit of perpetual charge and discharge. It offers three drive modes (EV, Eco and Power), uses either or both motors depending on battery charge and replenishes electricity via the petrol motor, deceleration and/or braking.

Performance fans will be more interested in the Auris TRD, a bespoke South African creation based on a 1.6 petrol model that has been dunked into the TRD catalogue once or twice. Toyota South Africa is keen to revive their TRD brand, also because it still enjoys a strong following without much help from the mothership.

The 1.6 Valvematic engine receives an HSK supercharger with lots of shiny plumbing, lovingly installed in a Gauteng factory. Power rises from 97 to 132kW and torque is raised from 160 to 203Nm. 0-100km/h takes 9 seconds and top speed is 220km/h, with average fuel consumption pinned at 7.5L/100km.

Our angelic and devilish Auris test route revealed the TRD to be as alive and agile as the HSD is sedate and soothing. The hybrid has instant torque and a quiet manner but is sluggish when compared to the zingy and rev-happy TRD.

Its performance isn’t breath-taking but enthusiast will enjoy taking the lively engine through its six manual gears. The same goes for the handling of these two – the hybrid is composed and comfy, the TRD is edgy and encouraging.

Every Auris enjoys a 3-year/100,000km warranty and 5-year/90,000km service plan. The TRD’s price was unconfirmed at the time of going to press. While we wait, I’d like to mention the Auris XD which sits neatly between the angel and devil in terms of power and consumption.