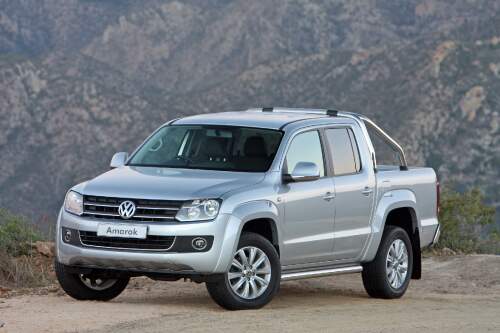 When the cat’s away, the mice will play. No sooner had our senior journalist boarded an Airbus bound for Germany and I took charge of the office. I rearranged all thumbtacks, drank all the coffee, put my feet on the desk and got myself invited to the launch of the new Volkswagen Amarok.

Never mind that nobody else was willing to go, that I hate flying, and that I seriously despise double-cabs. Let’s not argue; they are fantastically popular due to their versatility and perfect adaptation to the South African lifestyle. I just detest their split-personality handling.

Never mind I thought, again, as I squeezed into a plane one tenth the size of an Airbus and jetted off to Port Elizabeth. My mission for the next two days was crystal; to determine if the Germans had constructed a product less jittery and unpredictable than what I was accustomed to.

My first encounter was with a whole nest of Amaroks huddling together for warmth near a hotel foyer in the windy city. Be afraid, Japanese, be very afraid. The bulky presence of the new Volksie is only outdone by the clicking cellphones of passers-by, hotel porters and the odd motoring journalist.

Its square looks and blunt front end further enhance the scale of this bakkie and give the Amarok a no-nonsense, what-you-looking-at demeanour. According to VW, the generous proportions also give the Amarok class-leading interior space and the ability to carry a Euro-sized pallet.

With their tazers set to 1-ton 4×4 Diesel double-cabs, Volkswagen tested the Amarok (Inuit for Wolf, by the way) over 8 million kilometres and are aiming their Argentinian-built newcomer mostly at the bakkie-mad South African, South American and Australian public.

Available in either 4×2 or 4×4 (4Motion) guises, you also get a choice of three turbocharged 2-litre engines; two Diesels and a petrol unit. 2-wheel-drives carry a diff-lock for rough stuff, while the 4Motion system can also be chucked into four-wheel-drive on the fly, plus Low Range from standstill.

Two distinct lines, Trendline and Highline, further cleft the line-up with the higher spec enjoying standard ESP with tow assist and off-road mode. The ABS brakes can be set to off-road mode on all models to dramatically reduce the braking distance on loose surfaces.

The suspension features (gulp) leaf-springs at the back, which can be upgraded to heavy-duty equipment at no extra charge. Charged extras include rear parking sensors (a bakkie first), leather interior, metallic paint, bluetooth/USB upgrade, bigger wheels and a whole battalion of shiny accessories.

The Amarokko-rokko test route started on city streets and highways, both of which it aced. The controls are easy to operate, everything sits where it should and does what you expect. Typical Volkswagen, really.

My jittery and vague handling dread remained largely absent with the Amarok’s solid build and firm ride providing us with confidence to exploit the car’s potential, not just on tar. The beautiful Baviaanskloof was the backdrop to a dozen-or-so Amaroks cheerfully hammering through the scenery.

The rev-happy turbo-diesel is quite vocal, the light rear invited the odd ESP intervention, but dirt roads are no match for the faultless 2010 Dakar rally support vehicle.

Throw some ruts, water, inclines, rocks and sand into the mix and the Amarok just keeps going. What Volkswagen has built then, is the latest and greatest version of South Africa’s favourite car laced with best-of-this and first-of-that.

They also claim to have constructed the world’s most fuel-efficient bakkie at approximately 7.9L/100km; we managed an amazing 9.5 with our rather vigorous testing regime and thanks to six gears the single or twin-turbo Diesels never ran out of ideas.

Expect Amarok to appear at dealers around November 2010 with a substantial waiting list, a 3-year 100 000km warranty and 5-year 90 000km service plan. The German Giant may have just chucked the proverbial cat among the pigeons, but I need to go buy some coffee before Hans gets back.