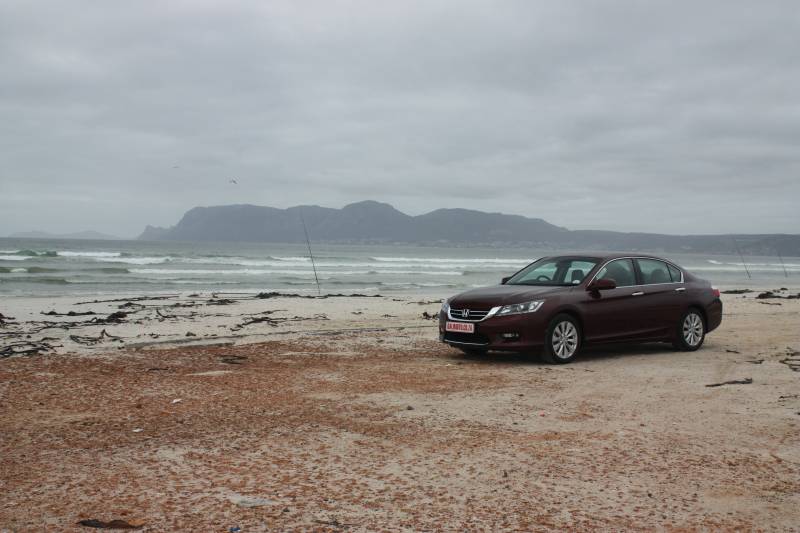 It turns out that we were on our best behavior throughout the year as we found a new Honda Accord under our Christmas tree last year. Although we weren’t allowed to keep the maroon metallic sedan indefinitely, the kind folks at Honda allowed us to use it all through the festive season.

What follows hereafter is a collection of our combined impressions, arranged in a few reasons why you should consider the new Honda Accord as your next car:

Although the name has been around for over a decade, what you’re looking at is new to southern Africa. Replacing its more taught European counterpart, this is the bigger American-spec Accord which has only been on sale for a few months. Chances are good that you’ll have the first one in your street.

OK, so it isn’t Ferrari beautiful or Audi understated but our entire office agrees that this new Honda cuts a dashing figure. Interesting details like the rear light clusters or styled window line ensure that it stands out at the office car park and they also help to disguise this sedan’s relative bulk. Speaking of which…

The U.S. heritage is an obvious giveaway to this car’s extremely generous cabin. There aren’t any sedans at this price (N$398 600) which will house my 1,95m in the driver’s seat and leave sufficient room for another of my type behind it. The only contender we could think of is the Lexus ES250 – starting at N$471 800.

The discontinued Subaru Legacy and Chevy Lumina sedans came close and of course you could add another digit to your budget to buy an A8 or S-Class. But if you and yours are big people in need of big space (especially at the back), this entry-level Accord is your ticket to ample seat width, length and height.

Another benefit of its generous proportions is the easy entry and exit granted by this car’s enormous doors. Our trusty measuring tape revealed 1.16m length for the front doors and a very impressive 1.06m for the ones at the back. Honda tells us that the boot can swallow 453L – and we believe them.

Forget about tight cornering, snappy gear changes and razor-like steering reflexes. This Honda Accord excels at something which almost every car manufacturer has forgotten: relaxed comfort. Guaranteed to bore most people to tears, it will soothe the senses of those who just want to get home comfortably.

This 2.0 Elegance model’s four-cylinder VTEC petrol engine drives 114kW/190Nm to the front wheels via such an archaic five-speed automatic gearbox that it doesn’t even have shift paddles or a tip-shift function. The gear lever offers the same options as a 1970’s Merc – and the response of its host is pretty similar, too.

Armed with our high-tech GPS data capturing gizmo, Accord meandered its way to a best 0-100km/h sprint time of 10.8 seconds. It was at this point that we nominated the most useless feature in this car – its traction control. With excellent grip and not-so excellent power, it’s completely superfluous.

The twin-monitor system is half audio, half info and although it offers radio, CD, Bluetooth, USB, custom wallpapers and other such goodies, we found the sound lacking some oomph and its operation slightly cumbersome. With a bit of practice and the steering-mounted buttons, we soon got the hang of it though.

Here’s where our long-term Honda probably gave us the biggest surprise. With a dry weight of 1,480kg and its maximum pegged at 1,980kg, we dismissed Honda’s average petrol use claim of 7,5L/100km as a complete fabrication. There’s no way this lazy boy with its two-liter engine was getting close to that…

Well, it did and it didn’t. Driving around the undulating hills of our neighbourhood saw the consumption tilt 10L/100km but out on the open road it plummeted to seven; sometimes less. Cruising carefully at 110km/h resulted in 6L/100km; knock a few more km/h off that and you’ll be dipping into the fives.

Our average figure for just over 2,700km was 9,2L/100km, which meant that we often achieved 600km plus from the 65L tank and even came perilously close to 700 a few times. The downside of this great economy is a lack of torque – steep hills and overtaking moves often require a full boot of revs.

If we’d only tested this entry-level Accord for a week, we may have dismissed it as pap and boring. After spending way more time with it though, we grew fond of its old-school comfort and don’t-rush-me attitude. And last but certainly not least – if you need a big saloon at a decent price, this is your new car.