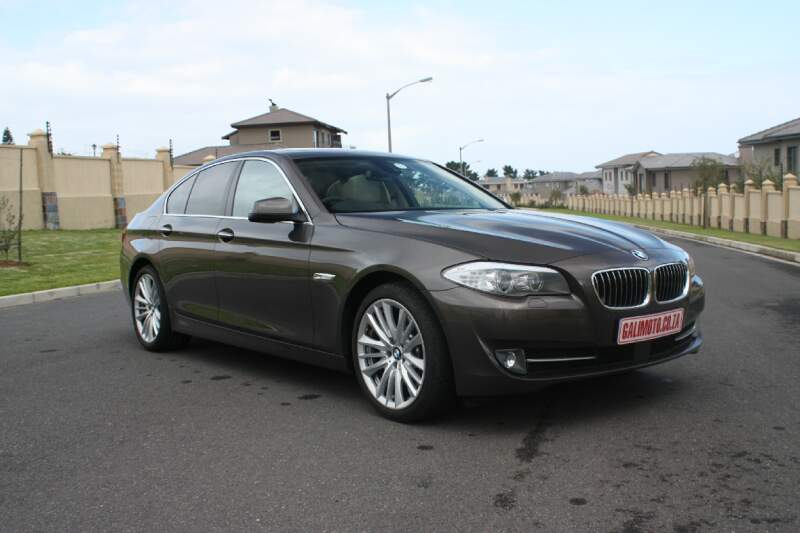 The power of Five

Right in the middle of BMW’s dime-a-dozen 3-Series and stock-portfolio 7-Series you shall find the obviously named 5-Series. With many experts pinning the recession’s automotive pain threshold around N$500 000, BMW shifted the middle-child Five away from Three and in the better-heeled direction of the new Seven.

Perhaps a little too closely though, as it appears that the 5-Series has been nicking technology from its big brother. One could argue that they were just being lazy (or stingy) by washing a 7-Series too hot, but I subscribe to the idea that they’re moving the yardsticks and tugging at the carpet which the accomplished new E-Class rests on.

I’ve long realised that arguing about cars is like arguing about music or food. Utterly pointless. And with this defence in hand I’d like to proclaim that I love the look and overall shape of BMW’s new car, except perhaps the nose. It looks like, surprise surprise, the new 7-Series and I don’t like it.

Happily, the rest of our 530d tester cut a very agreeable shape, was coated in a delicious metallic dark chocolate paint, and featured a black and cream interior. Yummy. The requisite BMW “angel eyes” headlight halos add to its menacing face with plenty of creases running along its bonnet and flanks.

Near the rear it all flows together into a sleek boot and cocktail-bar rear light clusters. Unsurprisingly, the 530d looks best at night, especially when the keyless entry system lights up all four door handles with a cool white glow.

Night-time is the right time to be resting your behind in the heated and super-adjustable seat of the new 5-Series. The spacious interior has a superb arrangement of materials, mostly leather. Our test mule was also fitted with extras that would make a space shuttle blush.

Everything is electrically operated (including the bootlid) and most things have digital control interfaces, e.g. the four-zone climate control. Our 530d also had an integrated rear entertainment package with two monitors, a DVD player and a remote control.

The front entertainment system includes a 6 DVD changer, hard disk drive (with Austrian music), AUX input, Bluetooth, Navigation, voice control and a cappuccino machine. OK, I made that last bit up. The steering wheel groans under the load of a dozen buttons and twisty knobs.

These take a while to get used to, as do the audio/iDrive controls. It becomes quite intuitive after a few days but even as a self-confessed gadget-boy I’m afraid to report that it’s a steep learning curve. Help is always at hand though, via a digital owner’s manual.

The 530d’s instruments deserve their own paragraph with 4 analog dials and a high-resolution colour display that cuts into the rev counter. Its reason for this is a digital consumption and braking energy regeneration dial. Other regions display warnings, audio, vehicle and trip information.

Power is transmitted to the fat 275/35R19 run-flats via an 8-speed automatic gearbox with two paddle shifts and four-stage electronic damping and dynamics control. Comfort and Normal offer a forgiving and subtle ride, Sport obviously hardens things up a bit and Sport+ shuts one of the traction control’s digital eyes.

The only negative comment I can make is that the Bee Emm’s suspension has lost a bit of its crispness, even in either Sport mode. Perhaps due to its 7-Series inheritance the new Five might leave old-school BMW drivers feeling somewhat removed from it all. And the aforementioned driver insults, sorry, aids don’t help much either.

Grip and comfort levels are superb though, no thanks to the four distinct driving modes. The super-smooth and over-eager gearbox is perfectly mated to that torque monster under the bonnet to transform the Five from sports saloon (with a decent exhaust note) to sublime highway cruiser and anything in between.

Tempted? You should be. A standard 530d starts at N$630 000 with an impressive options list, a 5 year 100 000km motor-plan and BMW On Call service. Are the radar-heated infra-night toys really worth it? Some of them, yes. Is the Five Series really worth it? You betcha; to the power of Five.