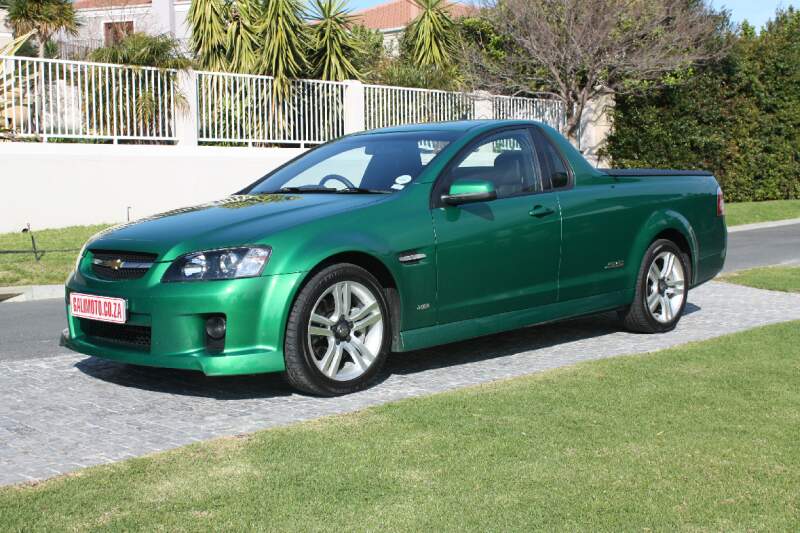 Shortly before composing this text I closed the curtains, made myself a cup of tea, killed all telephones and put on some Type 0 Negative. I want my peace and quiet. A week of driving the Chevrolet Lumina SS UTE has completely saturated my need for attention.

You see, the Lumina SS is a mean-looking car with a ferocious engine and UTE is apparently Australian for bakkie, so my week-long transport had a long load-bed preceded by a low two-seater cabin. To top it off, the factory painted this press demonstrator in what can only be described as GREEN!

The glittering gifappeltjie immediately started yanking reactions out of neighbours, friends, colleagues, family and complete strangers. Now I know what a pretty lady feels like when she passes a construction site; I’ve never been whistled and howled at until about a week ago.

As can be expected, acquaintances with double-barrel surnames and opera season tickets were not amused. The Lumina SS UTE received an equal amount of snide remarks and silently rolling eyes as it did thumbs up and flirts from other members of the community.

As with ballistic 4×4’s, I struggled to see the point of the crazy UTE at first. A quick peak under its tonneau cover revealed not only bed liner but generous amounts of space. I would however suggest that the driver either firmly secures their cargo or stays away from the accelerator.

This Chevy goes the way it looks and I would even defend the demented colour choice as quite fitting. If you splash out on a GTi-killing bakkie, it may as well be metallic leprechaun green. I would prefer red, but even dull ‘n dreary white will fail miserably to disguise the SS UTE intentions.

The front bumper has gaping air intakes and a fantastically low skirting board which is mirrored by the side sills between its attractive 18-inch wheels. Mean headlights initiate a stance which runs through the raked windscreen and curving rear buttresses to the elongated load bed.

Four shiny exhaust pipes complete the picture and exhaust the efforts of a 6-litre V8 engine under the SS bonnet. It is docile and quiet enough to burble along with traffic, has occasional opposed eight-cylinder twitches at idle and only starts barking when you annoy it.

270kW (367hp) of power or 530Nm torque is sent to the poor rear wheels through a smooth 6-speed automatic (manual also available) which offers tip-shifting but is slightly lethargic in its everyday reactions, only shifting up or down one gear at a time.

Still, just like the sedan, our Lumina SS pick-up dealt with 0-100km/h in 5.2 seconds and only wanted to keep going. It did pose more grip issues though, the traction control fighting with rear wheels that have less weight to push them into the tarmac.

Yes, that means the UTE is even better at hooligan behaviour and switching off the traction control will result in expensive Bridgestone-flavoured smoke and lots of sideways motion. It will also annihilate fuel at a blinding rate, 12.9L/100km being the manufacturer’s (rather optimistic) claimed average.

But I do have some good news for you. Quite a bit of it, actually. The Lumina SS bakkie is not just a stupidly fast attention seeker. Head- and leg-room is astonishing, as is the remaining cabin space and equipment. Both sports seats are comfy, covered in leather and half electrically adjustable.

The fat steering wheel with satellite buttons is adjustable and highly responsive, visibility is excellent, as is the 7-speaker 6-CD/Nav/mp3/bluetooth sound system, oddment space and the UTE’s climate control. The ride and handling might be a little harsh for some but deals with spirited driving well.

Just bear in mind that you’re driving a tail-happy pendulum which also applies to its initially unresponsive brakes that tend to ABS lock-lock the featherweight rear at higher speeds. Highway cruising is fantastic though, due to the incredible power reserves and the UTE settling down well.

It really is an astonishing vehicle, not just because of the atomic power and straightjacket colour. It offers sensible features like auto lights with home feature, remote central and auto lock, electric windows and mirrors, loads of storage and drinks holders.

The bakkie-shaped fun starts at N$413 700 and is available in six colours including the lovely “Poison Ivy Green” you’re now shaking your head at. I believe it to be a final safety feature for pedestrians; it’s not like they never saw (or heard) you coming.