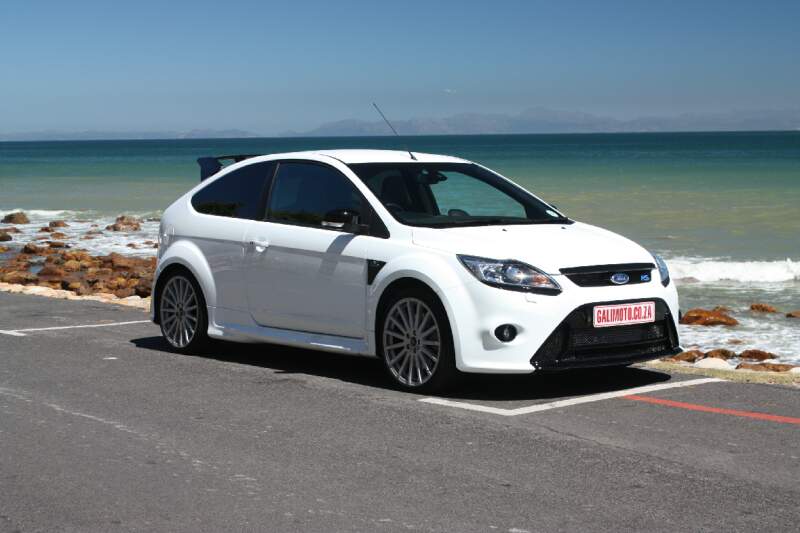 Sometime last month I won the lottery. Well, not really; but it felt like it when the phone rang and someone announced that they’re bringing over a limited edition Ford with, and I quote, “lots of wings and fins on it.” I knew exactly what they were talking about and immediately thought “Jackpot!”

So desirable and scarce is the Ford Focus RS that even motoring scribes had to beg and plead for an example to test. My white press demonstrator only visited for two days but I can assure you that I made the most of it.

Ford South Africa proudly imported 60 of these cars in Frozen White, Performance Blue or Ultimate Green for the rather steep asking price of N$479 000 each. Yet, before they could print the brochures all sixty were gone. Sold out. No more.

This should confirm that there is indeed room for a completely bonkers hatchback in an increasingly limp-wristed market. Never mind its proud RS (Rally Sport) heritage and esteemed forefathers, this Focus grabs everyone’s attention whether they like it or not.

It divides opinions much like a Lumina SS but cranks the volume right up to eleven. Nay-sayers and critics are speechless with rage and bewilderment, while its fans slip on their own (or each other’s) saliva while filling their phone memory with photographs.

In order to prevent further confusion the 263km/h Focus has RS badges on each corner and even more in its sporty cabin. The thin Recaro bucket seats are quite comfortable but can’t adjust for height and restrict rear entry slightly. Nobody seemed to mind, though.

The button-less steering wheel is adjustable and the Sony radio/multi-CD/USB/bluetooth sound system delivers excellent noises and may be tinkered with via an extra stalk on the steering column. The RS also offers a keyless entry system with an aptly named “Ford Power” start button.

Press it and the Duratec  2.5-litre turbo-charged five cylinder wakes up with that distinctive off-beat growl. It produces 224kW (305hp) at 6500rpm or 440Nm at 2300rpm which is all shoved to the front wheels via a six-speed manual gearbox and a supremely clever Quaife limited-slip differential.

Excited at the prospect of driving a 300hp front-wheel-drive monster, the very first thing I did was stall it. Nerves, I guess. But its clutch grips very early on and is actually quite lightly sprung; the tight gear-change presented no problems and feedback from the heavy steering is exceptional.

The hardest part of RS ownership will be the suspension, literally. Although it attempts to cushion out bumps and road imperfections, the stiff setup and 35-profile tyres are vying for the title of 2010’s most uncomfortable hatchback.

This didn’t bother anybody. Far more important to driver and passengers was the whacky repertoire of noises that a Focus RS can produce. It cruises quietly but accelerates with a deep growl and chilling turbocharger hiss; lift off suddenly and the dump valve whooshes loudly while the exhausts crackle and pop.

Better still, the lunatic Ford turned out to be very drivable if you employ common sense. It corners flat and fast, reacts instantly to direction changes, brakes as if you deployed three ankers and only gets lively with torque-steer under full tilt low-speed acceleration.

My best GPS 0-100km/h sprint was 5.7 seconds, 0.2 faster than Ford claims and well within V8 sport sedan annoyance territory. 400m fell in 13.6 seconds. I tried another run without traction control but that resulted in severe tyre smoke and an unregistered Subaru Impreza WRX behind me.

The Focus RS is as good to drive as you imagine it right now. Possibly better. It goes like the clappers, sounds vicious, attacks your neck muscles and doubles your friend count. Thank You, Ford. Thank you for building this beast, even though it’s hideously expensive and rare.