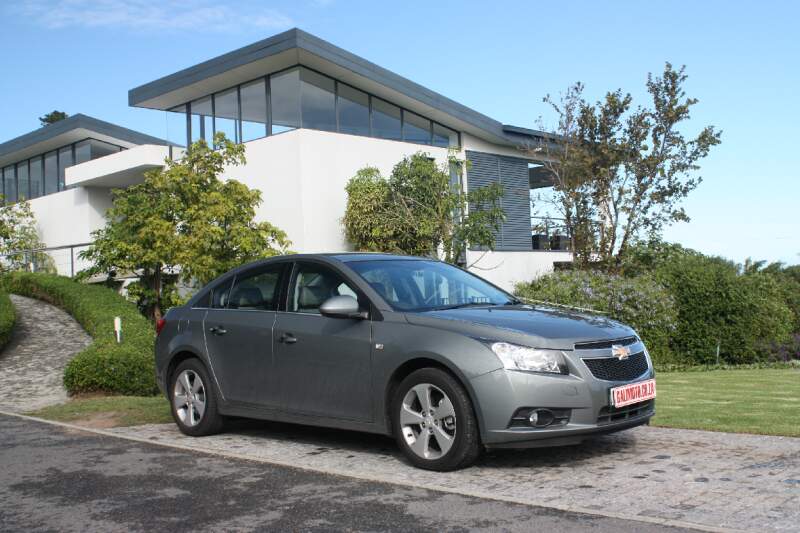 I’ve typed it before and I’ll type it again; I love a random pleasant surprise by having my expectations exceeded. When a dark grey Chevy Cruze dieselled its way into my life it had a rather steep hill to climb as my expectations were low to non-existent.

Colleagues who attended the Cruze launch complained about its wheezy petrol engine and someone proclaimed that Chevrolet would have to do better with their new “world car”. So please forgive me for thinking the Cruze would perfectly embody that wonderfully colloquial term “meh”.

What I hadn’t counted on was that my new mode of transport came with a modern turbo-diesel engine and range-topping LT specification. And so the Cruze immediately started hacking away at my suspicion with its keyless entry and ignition system.

Next to raise both my eyebrows was the two-tone leather interior with its incredibly funky dashboard. Light grey leather resides besides black plastics, chequered silver inlays, chrome highlights and neon-blue instrumentation.

Someone wrinkled their nose and called it kitsch but I approve of the crisp and modern GM/Opel switchgear, delicate dials with short red needles and the very blueness of it all. You may even choose to adjust it to lesser levels of cocktail lounge illumination.

The climate control shares a display with the (frankly excellent) sound system and both devices took me a while to comprehend. The radio/CD/Aux/USB system does offer more convenience via skip and volume buttons on the cool adjustable leather steering wheel; mirrored by a set of knoppies for the cruze control.

Darn it. It’s not that I wanted the Cruze to be awful but I didn’t expect it to be such a revelation. Auto lights and wipers, electric everything, eight airbags and the 450L boot gathered equal amounts of praise as the hard but supportive seats, 60/40 split rear bench, full spare wheel, rear park assist, decent rear head- and leg-room.

But before I got neon-blue glazed eyes because of all the toys, I took it for an extended drive to determine if it’s actually any good as a car. Does all the funky garnish disguise a boring or sub-standard automobile? The plain and simple answer is… absolutely not.

Cruze Diesel may only have five manual forward gears and 110kW (150hp) from its 2-litre engine but it has a wonderfully light clutch, responsive accelerator and steering, competent and forgiving suspension, fantastic ABS/EBD brakes and exceptional highway manners.

320Nm of torque is plenty-plenty to overtake or get the traction control’s attention but I did find the engine suffering from major turbo-lag under 1,500rpm, especially in its higher gears. Once force-fed though, the engine revs smoothly and freely and a slight change of driving style solved most problems.

Drive it very, very carefully and Chevrolet claim that it’ll only use an average of 5.7L per 100km and emit average CO2 of just 150g per km. Drive it very, very aggressively and it should zip past 100km/h in roughly 10 seconds before it runs out of oomph at a whisper below 200km/h.

Meanwhile, hundreds of kilometres later, I had grown extremely fond of my Chevy Cruze and demonstrated it to every acquaintance that came within earshot. I’m still not particularly crazy about its bloated nose or Toyota Fortuner exhaust pipe but overall it cuts a dashing and modern figure.

Then, last Friday, I eventually got the call I was dreading – GM wanted their car back and had to endure my incessant begging, pleading, bargaining and devious avoidance tactics. The caller finally admitted that I could keep my Cruze if I handed over a cheque for exactly N$269,900.

Although I was tempted for a second I surrendered later that day, waving good-bye to the Cruze with a heavy heart. Its 60L tank was still half full and as it rolled out of sight on its stylish five-spoke 17-inch wheels I decided that it’s just made it on to my list of 2011’s cars of the year.

The Chevrolet Cruze LT 2.0D was much, much better than I ever expected but I encourage you to test this claim yourself. Unfortunately I can’t report on its longevity or after-sales reliability but it does come with a five year 120,000km warranty and three year 60,000km service plan.

What I can also offer you (and Cruze) is this: GM / Chevrolet. If you’re reading this, puh-lease make sure your Cruzes are properly built and suitably backed up by your dealers. If you achieve these two tasks, the Cruze (at least in Diesel LT guise) will take care of the rest and should be a runaway success.