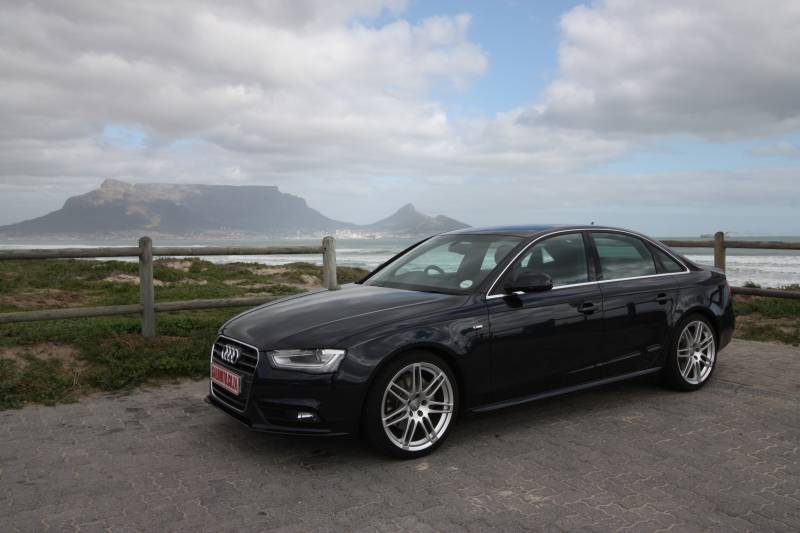 Compact executive sedans enjoy great popularity in South Africa and chances are good that you’re no more than twenty paces away from a 3-Series, A4 or C-Class. And rightly so, these arch enemies have never been closer and more accomplished than today.

The Beemer’s grown up a bit, the C-Class strapped on some trainers and the A4 has kept both of them in its sights with a major overhaul in 2008 and some mild facelifts. Choosing between the three will be a tough task unless you subscribe to brand loyalty or fancy a certain characteristic.

Audi’s A4 represents the sober choice in terms of design, its shape drawn with a tight pen and smooth minimalism that’s jazzed up by flashy LED light clusters and big, shiny wheels. There’s enough detailing and a swooping coupé roofline to give the A4 undeniable presence on the road.

Many people allege that Audi’s interiors are superior but I would happily put the other two on the same pedestal, the luxurious and sturdy interiors of these cars represent another check-mate on your shopping list and will probably boil down to personal preference again.

The three Germans don’t just echo each other in looks and quality, their engine choices are incredibly close as well and our A4 3.0 TDi test model will find similarly motorised competitors lurking in the other two’s showrooms. Just like the C350 CDI Mercedes, this Audi uses a 3-litre turbocharged Diesel V6.

This 180kW (245hp) motor is characterised by its masses of torque (500Nm) and very punchy response, a trait that goes well with the seven-speed DSG automatic gearbox. The twin-clutch ‘box can often be unresponsive and jerky at low revs / speeds but the V6 TDi simply overpowers all that.

In fact, the gearbox loves to potter around at 1,200rpm which keeps consumption down and is the start of a torque avalanche when you bury your right foot. Shift paddles and tip-function lend a sporty touch to proceedings, as does the engine’s dark V6 purr.

It didn’t take me long to adapt to this monstrous engine/gearbox combination and happily ignore the jerky response at parking speeds in favour of super quick and silky smooth shifts. Just like its competitors, the big Turbodiesel turns this compact sedan into a clucking speed demon.

The A4 can also cruise quietly (under 2,000rpm at 130km/h in seventh gear) and comfortably, despite this model being fitted with S-Line goodies. Some may find the ride too firm but I would happily recommend the full N$16,070 option to add some visual appeal to the vehicle.

Its wider rubber also benefits another ace the Audi has compared to its rivals – Quattro. The responsive steering may shuffle at full lock but the four-wheel-drive system endows this A4 with very high grip levels and an unbeatable sense of security, especially if the Cape winter cries all week.

The A4 quattro follows your chosen line cleanly and with minimal body roll which hands over to progressive under-steer at the limit. And this limit is darn high, even in soaked conditions, rendering most electronic stability and assistance systems almost useless. If you do get any warning lights to flash, massive respect and good luck.

A few other things worth mentioning are the very supportive (and spacious) sports seats, rather close pedals, roomy cabin and boot with foldable rear backrests for extra cargo options. The dashboard and instrument layout is impressive but may take some time to get used to.

The trip computer isn’t immediately logical but the big MMI infotainment system (N$22,200) with its multi-function central controller showed its intuitive operation once again. The sound system is excellent, as are the Bi-Xenon headlights (N$10,860), brakes and the start/stop system.

Last-named can even be modulated with the brake pedal or switched off completely, and obviously helps the 3.0 TDi to achieve its claimed averages of 5.7L/100km. Our best was 6.5L/100km so it seems plausible and our daily average of 8 is just as impressive considering the pace we usually travelled at.

The Audi A4 3.0 TDi Quattro S-tronic starts at N$503,000 which is, beeeg surprise, in the region of its competitors. If you’re reading this text in a desperate attempt to choose between this and the Bee-emm or Merc, I’m glad I’m not in your shoes. I’d take the Audi. No, the Merc! Wait, maybe the BMW…