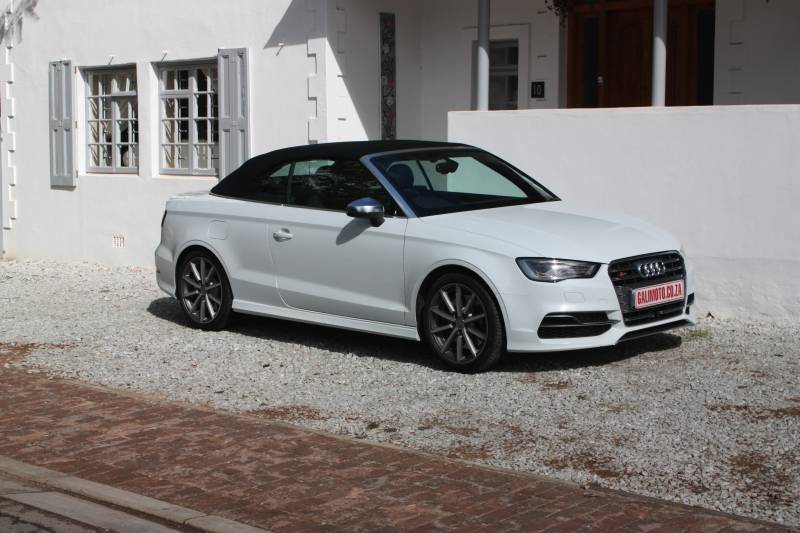 Some things just shouldn’t work, but do. Snoek and jam, leather and lace, symphonies and rock music, you get the idea. There are similarly strange combinations in the world of cars which, in theory, should be ghastly. We’ve just spent a week with one of them and it’s called an Audi S3 Cabriolet.

The Audi A3 is a premium hatchback available with two or four doors and, in one of its most extreme forms, a 210kW (286hp) beast of an engine. This “S3” variant already enthralled us as the handsome sedan version but none of us knew what to expect when its soft-top cabriolet brother pitched up for a dash of reviewing.

Here’s our problem. When you chop the roof off a car, it loses a lot of structural stiffness. This makes them rather wobbly and woefully indirect during hard driving and this sensation is generally heightened when you do this exercise with a stiffer, sportier, more powerful vehicle. Like an Audi S3.

We shouldn’t have worried. The German company with four shiny rings has been building convertibles for many years and knows a thing or five about vehicular solidity. They also have a lot of jolly sporty roadsters to take notes from – think Spyder varieties of the Audi R8 and Lamborghini Gallardo.

Half a minute behind the flat-bottomed steering wheel of an S3 Cabrio confirms that this chop-top comes amazingly close to the regular S3 in terms of overall firmness. There’s a tiny amount of sideways shimmying in the rear-view mirror but other than that, it feels rock solid. Even over nasty ridges and speed bumps.

The next thing to strike us in a pleasing way was its potent but smooth power delivery, a major factor which puts a negative twisting effect on roofless cars. Not so the S3 Cabriolet – thanks to the silky 6-speed S-tronic dual-clutch automatic transmission and sophisticated Quattro all-wheel-drive system, it squats down and goes.

The active steering is super-direct and light to operate; same goes for both pedals while the cabrio’s sports suspension is certainly on the stiff side but with an overriding suppleness. Our test car’s optional 10-spoke, 18-inch, 225/40R18 wheels tried their hardest but the ride was still acceptable for most occupants.

Fast, successive road undulations can briefly lift you out of the firm and supportive sports seats but, unless you drive like a bandit, the car itself remains composed and true to your projected path. With the top down, wind buffeting really sets in from 80km/h onwards but you can order an optional deflector to combat this.

The S3 Cabriolet also has a few features which all convertibles should have – do take notes, other manufacturers – like a roof that operates up to 50km/h and a button which operates all four side windows. Its closed fabric roof is so well insulated that we noticed more road than wind noise at 120km/h.

As you can probably deduct, this S3 didn’t put a single wheel wrong; and it just got better. Audi’s Drive Select chassis system is superb in Auto or Comfort mode, lethargic in its Efficiency setting and quite the racer in “Dynamic”. This mode agitates the engine, gearbox, exhaust, steering and suspension.

Put foot and the engine growls a bit louder while the exhausts pop and crackle during gear shifts; these are at your beck and call with steering-mounted shift paddles. In full Auto mode, we measured 0-100km/h in 6.31 seconds while Dynamic mode and the S-tronic’s launch control feature yielded 5.23 seconds.

In a shameless act of desperation, we took this headless rocket on an extensive Sunday drive, across vastly differing roads and many mountain passes, just to find a tangible fault. Nothing. Except perhaps its outrageous price of N$641,500 but even there we found an upside – supreme exclusivity.

If you can stomach that sort of expenditure for such a small car, we can confidently tell you that the Audi S3 Cabriolet is an amazing feat of engineering which you won’t see on every street corner. It is a bewitching combination of poser and power that technically shouldn’t work; but it does.