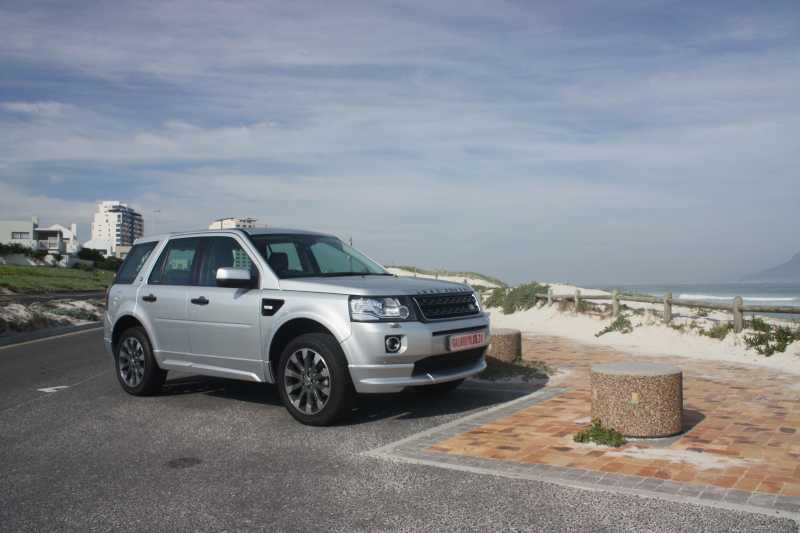 I’ve always thought that the Landrover Freelander looked a bit like the odd horse out in the Landy stable – it was just a little bit strange-looking and didn’t fit either the mould of the rough and ready Defender or the more luxurious Discovery. It seemed to hang in there like an uncomfortable third wheel. But no more.

The new Freelander 2 mimics its Discovery 4 big brother and performs a fairly adept ‘Mini me’ role in appearance. What is also impressive is to see that the designers took some notes from the Range Rover brand, particularly the Evoque, and glammed up the interior of the Freelander 2 as well.

Our test car arrived sporting an Indus silver metallic paint job with black grill and features. Inside was just as sporty looking with an eye-watering combination of ebony leather with ivory inserts in the upholstery department. Cue some Stevie Wonder and Paul McCartney moods. Jokes aside though, first impressions were really good and the good vibes continued from there.

Land Rover has departed from the original Freelander’s odd looks with a bold bonnet and grill, 19 inch wheels, more robust lines and a much chunkier, sporty look while still keeping the overall dimensions small and suited to the junior Land Rover Discovery role that the Freelander appears to fit so well.

These initial impressions carried through to the drive and I really enjoyed the feel of this big-small SUV. With a high enough ride and that massive bonnet, yet a smaller chassis than the much larger Discovery, the Freelander is certain to gain the approval of a yummy mummy or two. This robust revamp appears much larger from the outside than it allows space wise inside.  A colleague noted that it felt cramped – I prefer compact with everything in easy reach.

A colleague noted that it felt cramped…

Two sunroofs and large windows give the cabin an airy lightened feel, an important factor in preventing passengers in the rear seats from feeling cramped. The dashboard is redolent of the more popular Evoque with similar dials, presentation and drive mode selectors. The easy to use touch sensitive infotainment centre as found in the Evoque is a joy to operate and normal tasks such as programming in Bluetooth, selecting audio choices, navigation and more are all easily achieved and intuitive. Another departure from the original includes an electric handbrake which has allowed for the drive mode selectors to be moved to the centre console.

The Freelander 2 handled all the different driving situations we threw at it with equanimity. The small amount of soft-roading we did showed up a smooth, solid ride over ruts and potholes and decent grip in sludgy, muddy conditions. In town, the Freelander is agile enough for daily use and a comfortable commuting vehicle.

…agile enough for daily use and a comfortable commuting vehicle.

A slight drawback in the driving experience was the 6-speed automatic gearbox which had a discerning lag in the delivery followed by the turbo kicking in when you give a bit more gas which catapults the Freelander forward – problematic when travelling in the city between traffic lights.  After some practice however, the ride became a little smoother and performance on our freeway runs was more comfortable – just don’t try any sudden overtaking manoeuvres.

In general, I found the Freelander to be a comfortable, unfussy car for daily use. Fuel consumption is decent and we averaged a shade over 9l per 100km during our tests. Fuel economy is much improved by the 4 cylinder 2 litre Si4 engine which puts out a generous 177kW while still maintaining fairly even performance at lower speeds.

As an SUV suitable for urban living with country breaks, the Freelander 2 won’t disappoint. And with prices starting from N$433 500, it’s substantially cheaper than the more popular Evoque. Hopefully, with its new look and sassy additions, the Freelander may hold its own in the Land Rover stable from now onwards.