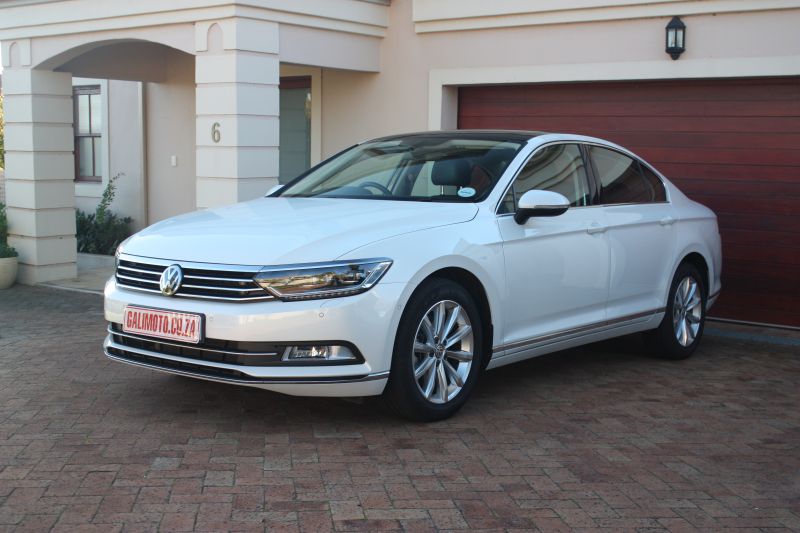 Some things in life can be classless. That doesn’t necessarily mean that they’re overly bland or common (wif a capital K) because the beauty of something classless means that it’s a great all-rounder; it fits in everywhere. Like a white collar shirt, a grey handbag or the new VW Passat.

Thanks to the striking design of this new model, you can roll up to a nightclub or park next to church and nobody will bat an eyelid. Its sensible badge means it’s a Wagen for the people while the sleek profile, chiseled jaw line and broad chrome face with adaptive LED headlights hammers home that this isn’t a Polo.

The biggest problem a potential Passat owner may encounter is the puzzled faces of his or her peers – why didn’t you buy a 3-Series? What’s wrong with a C-Class or A4? Well, they’re slightly more expensive, don’t offer the same amount of equipment and… and they’re so boringly obvious. Everybody’s got one.

This will also be VW’s biggest worm on their marketing hook, to catch those who don’t want the perennial trio of Audi, BMW or Mercedes. Perhaps even those who can’t make up their mind? But for the record, the Passat is more affordable, understated, roomier and – in most cases – comfortable.

The brand-new A4 gets close to the Passat because it’s a very close relation of it – which one can see, feel and hear behind the wheel of these cars. The Audi may have a smidgen more style but in my humble opinion, it merely matches the Passat for quality and ride. It even loses out on passenger space.

Passat’s rear quarters offer hilarious space for two tall adults or ample of room for three boisterous teenagers. The 480L boot matches all of its previously mentioned rivals. Occupants at the front get to enjoy a sensible and solid cockpit with optional goodies to please the gadget freaks among us.

Should you find your father-in-law seated next to you, he may be impressed by the more sensible cabin appointments like three long chrome bars across the dashboard which frame various air vents and an analogue clock. He may also appreciate the carpeted door pockets and many other storage nooks.

…the new Passat excels at comfort and softness.

Hit the road and it won’t take long to discover that the new Passat excels at comfort and softness. Steering feedback is on the light side, body roll is within acceptable limits and the four-cylinder turbo-petrol engine delivers its 132kW or 250Nm through a smooth and rapid DSG automatic gearbox.

Our Passat offered four drive train settings, including Eco mode with coast function which allowed us to average 7L/100km at some stage. Unfortunately, that’s still 1.2 above the manufacturer’s claim and our overall average hovered somewhere around nine liters per hundred.

That’s probably because we used Sport mode from time to time and flicked our way through the seven gears by means of the shift paddles. The DSG transmission is lightning-fast and highly obedient when commanded in anger but, left to its own devices, it sometimes seemed reluctant at low to medium speeds.

I’m sure this will please most Passat owners because this isn’t a car for Jamaican burnouts and handbrake turns. It has an electronic park brake anyway. Also, we couldn’t fully de-active the traction control for our performance runs, nor did we find a launch control. This resulted in a 0-100km/h sprint time of 8.28 seconds. VW claims 7.9.

Near the end of my week with the Passat, someone asked if there was something I didn’t like about it. After a while, I eventually decided that I didn’t fancy its local sales figures. Puh-lease go test-drive one because this is such a good all-rounder car. And it’s perfectly classless; in the best sense of the word.