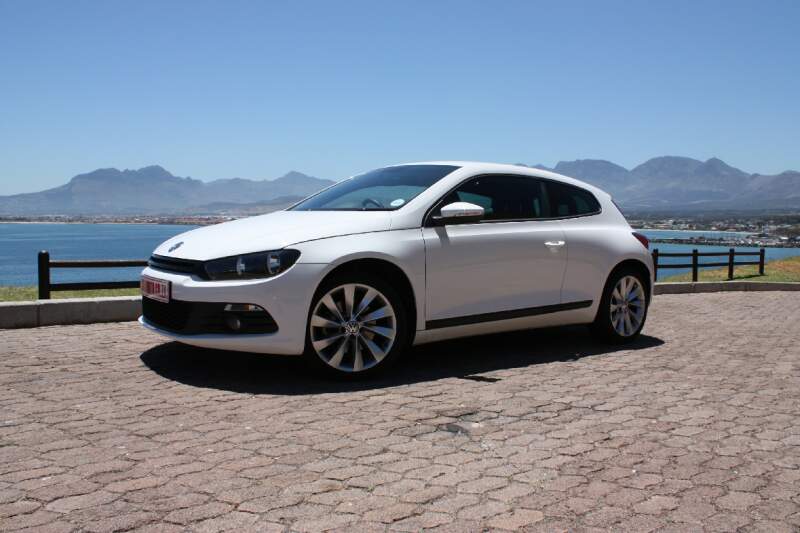 Some things will never change, and the Volkswagen Scirocco is surely one of them. I fondly remember the first version of VW’s sleek two-door coupe because a school friend’s Mom used to drive a silver 1980 Scirocco around Windhoek. Probably still does.

The formula for the newest generation hasn’t changed much, only its form and technology was heavily modified. The Scirocco is still a sleeker 2-door version of the Golf and offers trendy buyers an attractive alternative in the Golf segment.

I’m not implying that the Golf 6 is ugly; but its gorgeous sister with her angry face, elegant lines and wide hips will always attract more attention. I was predictably excited on the way to pick up our test vehicle in Cape Town and on the way there I was wondering which colour dress she would wear.

Not that it really matters; the Scirocco looks fantastic in any of its 10 available colours. I dislike white cars (trucks and delivery vehicles are white) but even thee most boring colour ever couldn’t do major damage the Scirocco’s beautiful lines.

Perhaps I should stop typing about the vehicle’s looks, but I reason that they might be one of its main selling propositions. No children? Scirocco. Stylish gadget freak? Scirocco. Bored and lonely on a Saturday night? Scirocco.

Things also look different behind the steering wheel of the new coupe, you sit lower in the leather sports seats than in a GTi. Combined with the small windows and low roof, the Scirocco isn’t exactly easy to get into. The rear seats will carry two adults, but there won’t be much room left to manoeuvre.

My two biggest complaints about the Scirocco’s interior are its steering wheel and the instruments. The former decided to forget its satellite buttons (for sound, info, or cruise control) at home, and Volkswagen’s policy of charging extra for these is rather unacceptable in a car of this class, or price bracket.

The instruments aren’t exactly ugly or difficult to read, but compared with the fresh white-on-red of a GTi they look rather dull and dreary. The central information screen come onboard computer reminded me of those from Audis a few years ago.

But enough complaining. Scirocco’s dashboard and other control elements are modern and familiar equipment from the Golf 6 / GTi range. Our test car was equipped with a big 6-CD / radio sound system with touch screen and “Dynaudio” loudspeakers (N$13 230) which delivered even more impressive sound than the standard kit in a Golf.

Its collection of safety equipment includes ABS, ASR, EBD, ESP, EDTC, EDL and HHA. Yes, I had to visit VW’s website to find some explanations. The first four systems to their utmost to keep you on the black stuff (and trust me, they work!), the following two control the engine’s torque and the differential’s power delivery, while the last system helps you to pull away on an incline.

Just like our GTi test vehicle, the Scirocco also utilised the 6-speed DSG double-clutch gearbox, which also offers launch control to impress your friends with. You may choose to leave the gearbox in full automatic mode (D), change gears yourself, or select a Sport mode. Two paddles behind the steering wheel then give you the impression of being a Formula 1 driver.

While the new GTi got a small helping hand with 155kW / 210hp, the Scirocco still uses an older (147kW / 200hp) version of the 2 litre in-line 4 cylinder turbocharged petrol engine. I couldn’t detect any major differences in performance; the Scirocco accelerated to 100km/h in 7.1 seconds and is supposed to achieve a top whack of 233km/h. Its average consumption lies at 7.6 L/100km.

Much like the GTi, its engine’s 280Nm of torque is a wonderful way of zipping about a lower revs, and it also sends a short “pop” out of the exhaust pipes if you choose a higher gear. Both engines exhibited a red zone of 6 200rpm but would gladly allow 6 800rpm under hard acceleration. Yet again this wasn’t necessary as the Scirocco’s highway and overtaking abilities were very impressive. And slightly illegal.

Scirocco’s suspension is unique when compared to the Golf range and offers you the choice between Comfort, Normal and Sport. The three settings do exactly what they promise and especially Sport lends the vehicle the characteristics that sporty drivers long for.