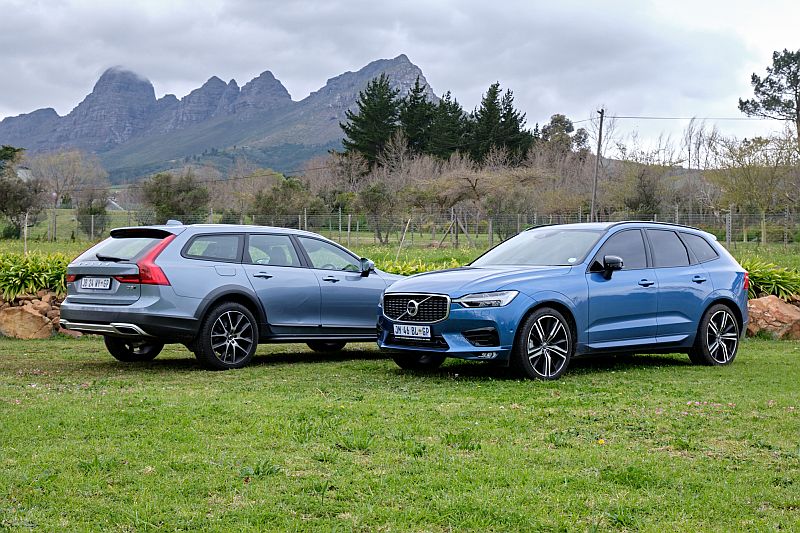 There you are, standing outside your local Volvo dealership after close of business and that stunning blue XC60 you had your heart set on is parked next to a cool grey V90 Cross Country. Dang it, which dotted line do you sign on?

Let’s start with the cold, hard facts. We’re comparing apples with oranges here because these two vehicles don’t just differ in size and execution; they’re also powered by different engines. At some point we thought of correcting this mistake but in our experience, these varied choices do come up quite often.

Right. So, at the time of composing this article a 2020 Volvo XC60 T6 AWD Inscription cost about R927,000 without options while a shiny new V90 CC D5 AWD Inscription would set you back around R1,053,100. It doesn’t get any better if we were to choose the same motorisation either way; the ’90 is at least 100k dearer.

Other similarities include the warranty, standard or optional wheel size, quite a bit of interior trim and most of the contents of their dashboards. If the infotainment system, climate control, engine start/stop knob, steering wheel or instrument cluster were deciding factors for you… I’m afraid you’re stuck.

They’re just about indistinguishable. I could swear that the seats and door cards are identical too. So, at least from the inside, you’ll have no sleepless nights about choosing the wrong Swedish soft-roader. An obvious difference is the ride height with the XC60 offering a slightly more elevated driving position.

Ground clearance is almost the same at 210 versus 216mm. That’s such a miniscule difference that I won’t even bother telling you which one’s which. Other figures which are neither here nor there are the un-braked towing capacity of 750kg (for both), six airbags (ditto), 2L engine capacity, roughly 1.9m width and kerb weights around 1,850kg.

While I’m rambling on about measurements, here are a few which may present you with a deal-breaker… The XC60 is more compact at 4,688mm length and you’ll struggle a little more to park (or garage) the 4,939mm-long Cross Country. Should height be a consideration, the 90 is 115mm lower at 1,543mm.

Each V90 Cross Country can carry more cargo with load volumes of 560 to 1,526L while the more compact XC60 can only counter with 505 to 1,432L of luggage space. Understandably, the more expensive vehicle also has more standard features so V90 owners enjoy clever headlights and advanced cruise control at no extra charge.

A big mark against the larger estate car is its fuel tank of 60L… the XC can help itself to a filling of 71L. And that it certainly will because this turbo- and super-charged petrol T6 model may have hilariously superior fire-power but its average fuel use is also counted in multiples of the frugal D5 turbo-diesel.

Should you really be faced with this choice, we recommend the gutsy T6 for enthusiast drivers who have access to someone else’s fuel account. Anyone else – especially serial commuters – should immediately discount everything in favour of the economical D5. Thanks to clever Volvo tech, it’s surprisingly agile too.

And if we’re completely honest here, the buying power in southern Africa has long been corrupted by ego-centric SUV’s while mocking what precious little is left of the amazing estate car. Anyone who says “hearse” will be banned from this website! However, in the real world that means that the XC60 will always trump its bigger sibling.

In fact, swap the engines around and you’ll have every Volvo enthusiast’s dream (a V90 Cross Country T6) which nobody else would touch with a sizable barge pole. They will flock, nay, trample over each other to the vehicle which you should ultimately buy: a brand-new XC60 D5. In white. With black leather.