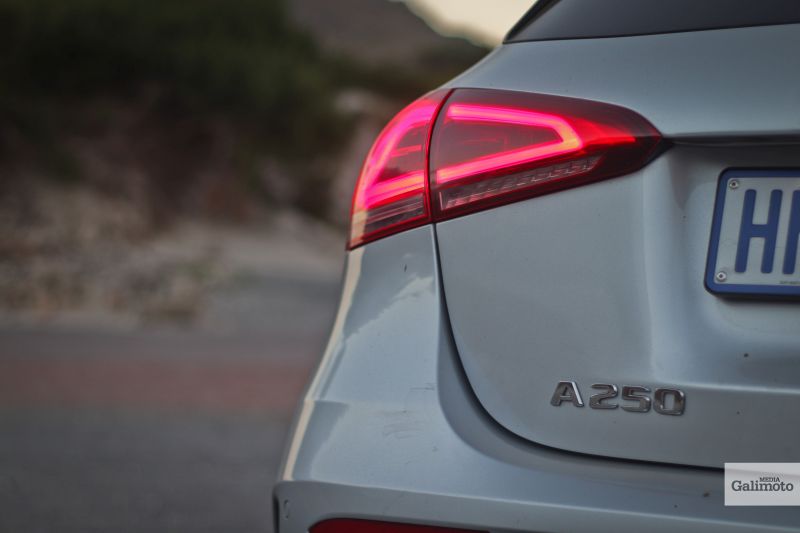 It may be completely immaterial to you but we at NamWheels like a good car fight. On paper. So here’s our attempt at sending off another Mercedes-Benz A250 AMG Line… straight into the fists of its hot-headed rivals.

For the sake of this comparison (and our sanity) we’re only looking at hatchbacks with automatic or dual-clutch gearboxes under R600,000. Yes, that’s what your nearest Mercedes dealer will ask you for a brand-new A250 AMG Line and, should you plonk down a suitcase brimming with cash, they’ll even give you R1,976 change.

The next thing you’ll learn is that this model is only available with AMG trinkets; there is no base or non-AMG derivative. You can also have this drive train in the new A-Class sedan but not the CLA, which is basically the same thing. Does anybody at Mercedes still know what’s happening in their model line-up?

Towering above a turbo-diesel and smaller turbo-petrol, this A250 need only fear the proper AMG’s whose wardrobe it nicked. The A35 or A45 put out 225kW or 310kW respectively and require an additional 159 or 395 thousand above this car’s asking price. Yup, that’s right. The new A45 AMG is just-just shy of a million.

In the A250 AMG Line, up to 165kW or 350Nm rise from a 1,991cc in-line four-cylinder turbo-petrol and goes via a seven-speed automated dual-clutch transmission to the 18- or 19-inch front wheels. Let’s not delve into the standard or optional features too much, otherwise we’d have to compare this to a new Bentley.

Nope. What this medium-powered, front-wheel-drive, slightly fidgety, multi drive mode hatchback competes with is Golf GTi’s and John Cooper Works’. And without further ado, here is a simplified table of comparison for you perusal:

I’m sure that by now you’ve made (or confirmed) your choice which is why we won’t mess around with power-to-weight ratios, 0-100 times and other stuff too much. The Merc’s power (kW) output is in the lower-middle pack while torque looks slightly better. As always, the same can’t be said for its price, though.

So is it worth the extra investment over all its abovementioned rivals? Objectively, we’d have to say no because it’s not as lively as the Megane, nor as refined as the unshakable GTi or premium-feel Audi A3. There’s certainly an urgency to the A250’s power delivery which can even border on messy at lower speeds; no thanks to that dual-clutch gearbox.

Other DCT’s can also act retarded from start-up and if our memory serves us correctly, the elder VW/Audi units are most rewarding at speed. Merc’s unit isn’t far behind (in terms of ratios and response) with only the Renaults lagging in both departments. And the Megane has up to 275hp to contend with at times…

Most of our testers admitted that the A250 AMG Line looks striking, has an achingly modern cabin, steers and handles like a hot hatch but has a harsh ride with noisy tyres. This is also true of most competitors, and this second generation A-Class rides better than its predecessor. Our test car had a rather touchy (read: fierce) brake pedal.

We could go on about boot space or cup holders but suspect that most buyers (especially those looking at demos or discounted vehicles) will not be swayed by such trivialities. They probably want the Mercedes for its badge, possibly the cool gadgets and trendy design, or the mere fact that it isn’t a Golf GTi.