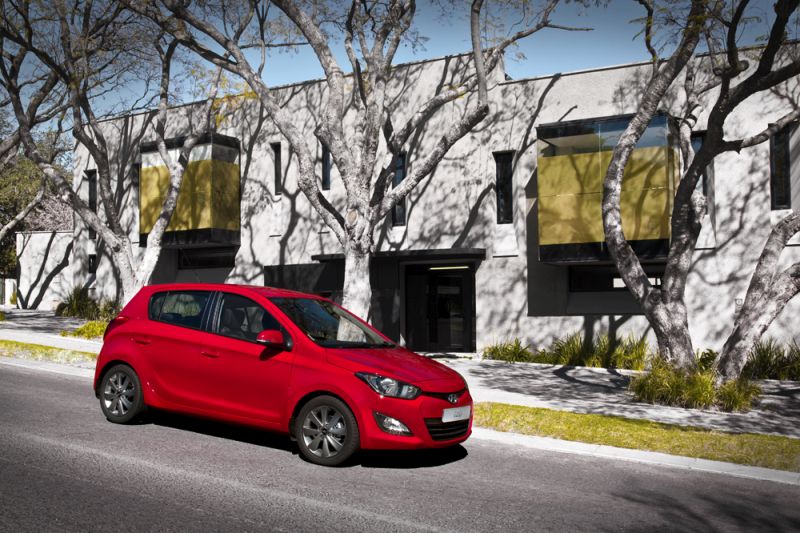 Today I bring you news of the freshly face-lifted Hyundai i20 which, for most people, probably bears the same significance as a kitchen appliance sale at your local mall. So – for those of you in need of a new dishwasher, err car, you may want to read on.

The i20 plays in our highly competitive B-segment made up of small hatchbacks like VW Polo, Ford Fiesta and Toyota Yaris. All these cars, including the refurbished Hyundai, are about as exciting as a washing machine but enjoy the same intense popularity and sales figures of such an appliance.

With strong local and international sales, Hyundai reports that the i20 is easily ahead of its projected sales targets, despite the recession. The car’s 18% market share may only be half of Polo numbers but it’s easily double of what Nissan’s Micra or the Toyota Yaris achieve.

This is no small feat as the i20 is the new kid on the block and only has three models in its line-up. The cars are built in India and have just cut your engine choice in half… to just one. The previous 1.6L motor is discontinued and three 1.4L models remain. There is no Diesel available.

As is customary with these mid-life updates, the car features new colour choices, new bumpers (+55mm length), lights, front grill, bonnet, seat pattern, and centre dashboard facia. This styling update brings the i20 in-line with its maker’s design identity and adds a few specifications to keep annoying its competitors.

Hyundai was quick to point out that this superior list of features will be their competition’s undoing and enough temptation to consider one of the three available models. Fluid (manual) costs N$164,900 while its automatic twin retails for N$174,900. The fancier Glide (manual) model will set you back N$176,900.

On our drive through a soaking wet and gale-force Western Cape route, most people agreed that the little hatch was easy to drive and easy on the eye, offering fuss-free motoring as long as you don’t floor it in sixth or overcook a corner – the 1.4 has insufficient torque and lacks traction control or ESP.

In the i20’s defence, all press cars had minimal mileage and the weather was doing its utmost to unsettle Hyundai’s efforts. The engine wants higher revs to get going but other than that, the car doesn’t put a foot wrong. The 5.2m turning radius is great, the 45L fuel tank is sufficient and so is the 295L boot.

But wait! Now you need to add Hyundai’s 5-year/150,000km warranty and 3-year/60,000km service plan to the mix. This, together with the car’s specifications, makes the i20 highly competitive and a solid list-topper for any B-segment shoppers.

Most people ask my opinion on the Yaris or Polo, having already made up their mind as they always, always ignore suggestions like the i20. Factor in pre-owned vehicles and the Hyundai doesn’t have an easy task to break the sheepish local brand loyalty. It’s absolutely capable of doing it – just give it a chance.