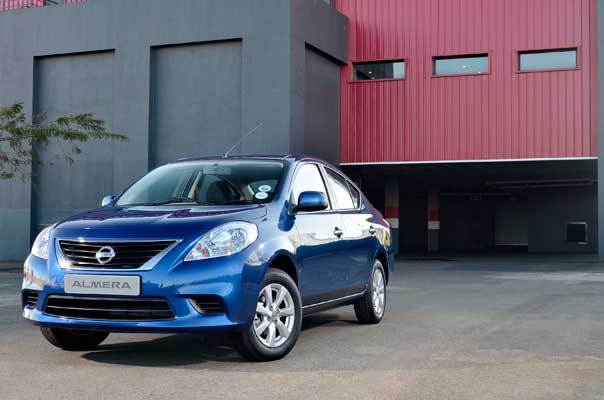 Perception. It’s a funny old thing that, teaching us that opinions and tastes will always differ. I was on the brink of writing what could’ve been the shortest review ever when I decided to shift my perception of the car in question and give you more than just one opinion of the new Nissan Almera.

Once upon a time I met Jacqueline, a real person with a fake name that I’ve just made up. Very French and oh-so chic, you’d think she drives a Peugeot convertible or at least a Renault Clio, but no. Jacqueline and her husband Jean-Luc (also fake) own a Nissan Tiida. Or a Nisssan Tih-dahhh, as she called it.

The reason for their choice, once she stopped laughing at my shocked expression, Jacqueline explained as the need for a simple, affordable, good car. It’s one of many times when I learnt that some people just want transport and don’t care about cars. And as much as I don’t like it, I certainly respect it.

We could go even further than the French couple’s perception and include people who might want something fast ‘n fancy but out of sheer necessity or financial reasons, can only afford an Almera. Which, by the way, is the successor to the Tiida; and that replaced the original Almera.

Fresh for 2013, the Almera was born out of Nissan’s aim to build good quality vehicles with a low cost of ownership. They pulled it off by using the Micra’s V platform for the Almera, thus saving on development investments. Nothing wrong with that; and I can already think of a potential customer.

This multi-tasking platform also houses Nissan’s Note and aims to carry a million cars per year, built in four plants around the globe. Our ZA / Nam spec cars (Micra and Almera) are assembled in India. Nissan execs were also quick to point out that the Micra aced the South African Kingsley parts pricing report.

That should hopefully affect Almera sales as well, if its no-frills technology, C-segment size and B-segment price weren’t enough dangling carrots already. Only available in one spec (Acenta) with one engine, your only choice of models is a 5-speed manual at N$165,000 or a 4-speed automatic shifter at N$175,500.

The engine is straight from a Micra and offers a respectable 73kW (99hp) or 134Nm, claiming average fuel consumption of 6.3 (Manual) and 7.2L/100km (Auto) from the 41L tank. You also get class-leading rear legroom (apparently) and a massive 490L boot for all your briefcases and samples.

Not that the Almera will only be hired by business types, a growing family should also appreciate the roomy and simple interior, comfortable ride as well as ABS brakes with brake assist and emergency force distribution. For the Southern African market, only a black cloth interior is available.

I won’t go into too much detail about the Almera’s looks. It’s inoffensive and inconspicuous, something that will certainly find a few fans. And as long as they live at sea-level and don’t carry much cargo, they may even delight in the revvy engine. We measured 0-100km/h in about 11 seconds, which isn’t bad.

The engine feels lively and very willing, although it can get a little noisy at higher speeds. Nissan gave the new Almera decent insulation and aerodynamics, as well as a feather-light clutch and steering system. It drives well. My only criticism of the power-train was a post-shift throttle surge on our manual test car.

Other notes I made include the boring but easily controlled sound system with AM/FM radio, four speakers, CD/mp3 playback and Aux socket. We would’ve liked a USB port and Bluetooth but found that not everybody does and those who do can opt for one of those snazzy aftermarket systems.

You do get an adjustable steering wheel with audio buttons and a decent little trip computer between the half-analog, half-digital instrumentation. The boot lid can only be popped from inside or the remote / key and it shares the same shocking paint and metal finish as the bonnet / hood.

But this is all a matter of perception and the result of keeping costs down. Although it’s rather basic and boring, I found the Almera to be easy, comfortable and frugal to drive. And if you’re just looking for a car, the new Nissan Almera ticks most boxes at a decent price.