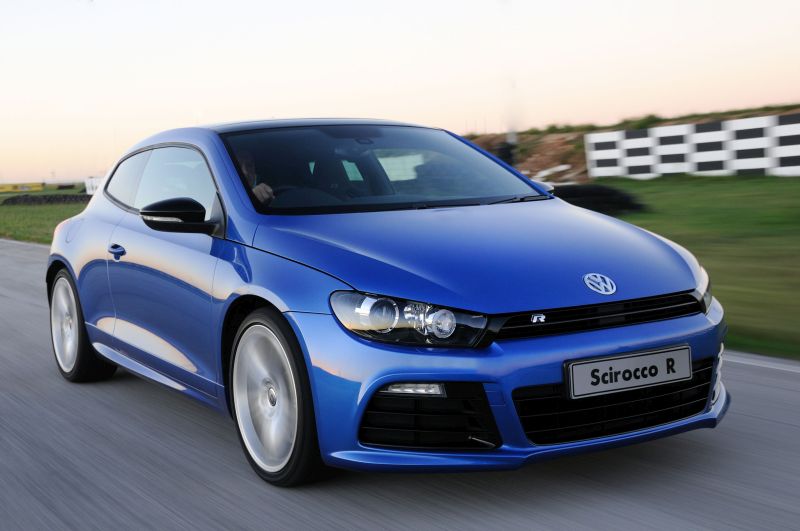 I’m quite sure that I’ve mentioned my love for coupés before, so our invitation to the new Volkswagen Scirocco R launch in Durban resulted in a brief rock-paper-scissors competition at the office, won by yours truly. Perhaps I cheated, perhaps I didn’t, but a few days later I was jetted off to KZN.

Exiting the impressive King Shaka Airport with fellow journalists, we were greeted by a vibrant array of Scirocco R’s and their every-friendly Volkswagen custodians. Yanking everyone’s attention, cellphone cameras and even seasoned car rental drivers towards it was the toxic green metallic specimen.

A heated debate immediately ensued. Is the Scirocco Ahr worthy of the crazy colour? At least half of the crowd would buy it but feared its resale strength. The other half declared it as too brash but agreed that the car deserves a bright colour to better contrast its dark window line, bumpers and lights.

A more sizable spoiler above the rear windscreen, lower side sills, and R badges on grill, bootlid and brake callipers complete the N$70,000 upgrade to a mere mortal Scirocco. The flat stance and stubby rear end of an R hide very high standard specifications and few optional extras:

Both gearboxes feature six forward gears with shift pedals behind the steering wheel for the double-clutch DSG automatic. Both models feature engine tweaks and turbo-charger upgrades to the familiar 2-litre four cylinder from a regular GTi or Scirocco.

Our 300km test route returned average consumption of 10 to 11L/100km which, considering our pace at times, was tremendously low. The drive also highlighted the Scirocco R’s hard suspension (especially in Sport mode and at low speeds), meaty steering and rumbling fury of an engine.

The two-litre’s punch beggars belief as much as its competitors, pulling firmly and cleanly towards almost 7,000rpm.  The growling 250-plus horses are well behaved and only invited minor torque-steer or unwanted direction changes with extreme provocation and/or monsoon weather conditions.

An almost deserted and tremendously winding road played host to 1/2 a dozen Scirocco R’s carving around corners and flying down the straights, occasionally in wet weather, and all six made it back to base with twelve smiling occupants. This car is extremely composed, well planted, predictable and agile.

Some peers noted that, compared to the Golf R, the Scirocco doesn’t inspire quite as much confidence as its 4-door 4-wheel-drive stable mate, but feels much lighter on its feet. The DSG auto is quick and precise, obviously less involving than the Manual, but the correct choice for serial commuters.

And as Golfs are only available with four doors, the Scirocco enjoys its own market of stylish, impractical, eager coupé buyers. It’s priced close to other 250hp-plus two-door lunatics like Megane RS (Cup), Audi S3, BMW 135i and currently represents the cheapest German (and automatic) choice.

The Scirocco comes with that built-in VW solidity, is available in seven colours and has a five-year/90,000km service plan and three-year/120,000km warranty. I loved the raucous Megane RS Cup and beefy S3 but won’t promote the Scirocco R as the superior machine; I’ll leave that agonising choice up to you.