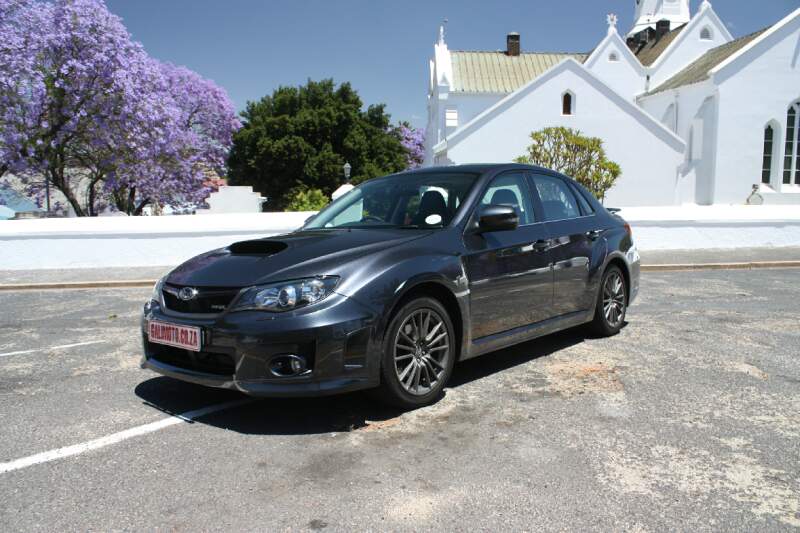 The list of things I’m scared of has just grown; again. Right behind Tequila, cameras in bushes, spiders that are bigger than my shoe and the 2009 Subaru Impreza WRX comes the 2010 Subaru WRX.

You may have noticed the absence of “Impreza” from my description of this updated WRX sedan, the reason being that Subaru themselves have dropped it. Impreza denotes the meek ‘n mild 2-litre sedan, whereas WRX and STi badges are only stuck onto the freaky ‘n wild turbo-monsters.

The finned, winged, slashed, gashed and angry black beauty you see on this page is the half-insane WRX sedan with a 2.5-litre turbo-charged Boxer (flat) 4-cylinder engine thumping out 195kW (265hp) or 343Nm. The completely crazy WRX STi uses an uprated version of this motor with 221kw (301hp) or 407Nm to scare Porsches.

And scare Porsches it should, as our watered-down 195kW version already turned out to be a giant killer. I’m sorry, but I could only contain my excitement beyond the fifth paragraph about the WRX’s GPS-measured sprint to 100km/h: 4.9 seconds.

Four point nine. That easily makes it the fastest accelerating car we’ve ever tested, beating the Lumina SS by 0.3 seconds, the Lexus IS-F by 0.5, the Ford Focus RS by 0.8 and its own manufacturer claim by a whopping 1.1 seconds!

Our test was conducted on a chilly Thursday evening, launching the car at about 5 000rpm without traction control. The resulting forward surge is truly mind-bending, the front wheels barely chirp before all four tyres chomp into the tarmac and catapult the WRX onwards.

You may argue that zero to hundred is hooligan stuff, statistical ammo for bar-side brawls and late-night traffic light grand prix. And you would be right, as that is precisely the point of this car. It launches off the line like a 911 Turbo and will embarrass cars with far more power.

However; at 400m the Subaru WRX is already 0.1 seconds behind the Lexus IS-F and most of its competitors will eventually sail past the eager Scooby. It doesn’t lack top-end power, oh no, it just has rather restrictive gearing which will see it head-butt its limiter in fifth at an indicated 220km/h.

So is it just a one-trick pony? Not quite. Remember that Subaru made its name by churning up the rally tracks of the world, a feat which still infests the road cars of today. Low-slung boxer engine, lightning acceleration and short gearing… mmh, sounds like a rally car to me.

And can you think of something else that the dirty rally brigade loves? Ten points for you if you said “four wheel drive”. Subaru include the word “Symmetrical” to its description, reminding us that the car’s safety systems and clever differential will provide you with rally experiences.

The fat 235/45R17 rubber provides plenty of initial cornering grip, then starts wailing with under-steer as your courage (=speed) increases. At this point you may either lift off to experience over-steer and/or floor it to achieve phenomenal grip, depending on road conditions.

If I haven’t mentioned it before, this is a good a time as ever: Caution – this is not a toy! The WRX caught me out once or twice, not only with its rather soft and rolling suspension, but because it found grip long after I thought it had misplaced it.

Just like its 2009 predecessor, the WRX proved that tyres can make two distinct sounds. The usual scream as they are about to lose traction and a deeper howl as they somehow find more grip. And once you surpass THAT grip, no amount of electronic active stability differential control will save you.

The gear-change is quite notchy and woolly, the clutch is reasonably firm (with hill start assist), steering feel is razor-sharp, the brakes are initially spongy, as are parts of the accelerator. Power delivery is smooth, sometimes delayed by a turbo-gap, but always beyond satisfactory.

WRX’s bucket seats are more comfy than supportive, the interior is up to the usual Subaru level of acceptability, the 6-CD/mp3/Aux/USB/radio sounds average and the boot lid is flimsy. All of that is irrelevant though, as it isn’t the point of this car.

The point, in case you missed it, is rally thrills for double-cab money.