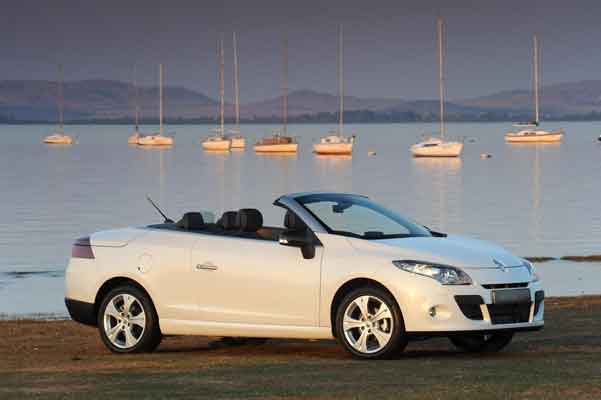 Although I’m not exactly a fan of summer, I tend to agree with its fans when they complain about recurring climates with five sunny days followed by two days of miserable weather; otherwise referred to as a weekend.

Just when you thought it was safe to coax the old SL or Healey out of the garage for a Saturday blast to Okahandja, a cold front rocks up and foils your sunny plans. What topless motoring enthusiast need then, is a daily driver which can drop its top any day of the week.

In order to deal with real-world practicality, you’ll have to start shopping for four-seater cabrios where you will stumble upon, among others, the new Renault Megane Convertible. And despite strong genes, the open Megane isn’t just a scalped version of the Coupe.

The similarities disappear somewhere beyond the front door where huge surfaces and a rising hip line converge in what can only be described as a big bum. The dark rear light clusters and black plastic bumper insert break up the bulk and lend a mean look to the car’s rear quarters.

Happily, there seems to be a red-ish option for anybody wishing to avoid sitting neck-high in what Renault call “dark carbon”. Yes, the leather and materials are of good quality and well put together, the white stitching is a nice touch, but park it in the sun for 10 minutes and get back to me on the colour.

In order to liven up the coal-coloured baking oven, a beautiful silver weave-patterned strip zips around the dashboard, joined by a silver steering wheel insert, shiny pedals, silver accents on most control surfaces, chrome door handles and instrument bezels.

The Megane C.C. is undeniably trendy, no matter what I think about the interior colour, the position of its door handles, the weird instruments, that annoying gear change suggestion light or the usual Renault ergonomics. And with a collapsible roof, the emphasis is more on posing value than practicality.

Or sportiness, for that matter. In order to accommodate more junk in the trunk, parts of this Renault had to be supersized and beefed up until the final product weighs just over 1.7 tons. The roof takes 20 seconds to open or close and Megane comes with roll-over hoops for any upside-down parking manoeuvres.

With the roof stowed away in the boot, the 5-star safety rated Cabrio’s body flexes so severely that following cars dance around from side to side in your rear-view mirror and you can often feel the car wiggle its way over uneven tarmac.

Thankfully, the topless Megane has a tiny glass wind deflector between the rear headrests, making open-air excursions, especially high-speed ones, borderline tolerable. Leave the kids at home and you may even erect the more sizable fabric deflector behind the front seats; which works perfectly.

Another perfect item is the car’s sound system, despite its (and the radio, nav, bluetooth) operation being cumbersome. Just like its main French rival, Renault has fitted its big convertible with an almost audiophile-level sound system. It’s fantastic!

More good news is that the Megane tries to make up for its laughable boot and rear seat space by being delightfully easy to drive. It tries to counter its hefty weight by offering feather-light pedals and steering with good feedback, and a relatively eager engine.

Braking is superb and the car’s handling is neutral and predictable; mostly because there isn’t enough power to get stupid. There will always be enough fuel though, as this Renault is incredibly fuel efficient (claimed 7.3L/100km average) and environmentally friendly (claimed 169g CO2/km).