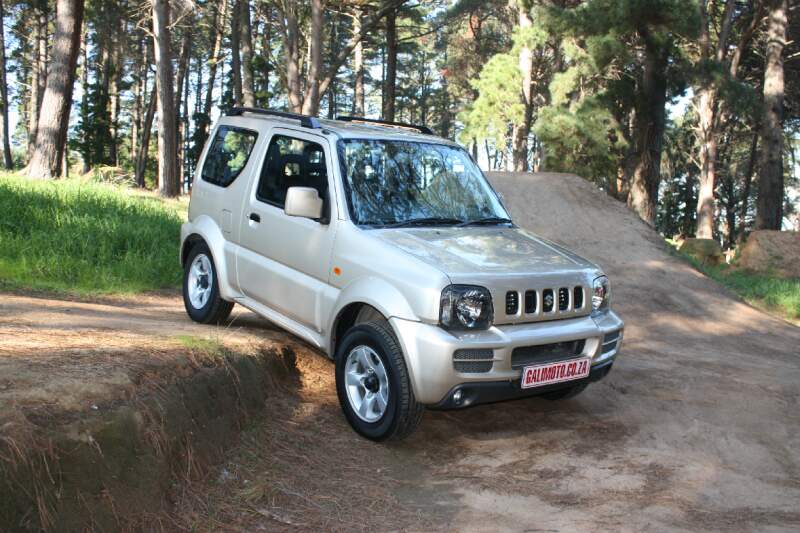 Good news and bad news. The good news is that I’ve just tested an automotive icon which most of my peers describe in an animated fashion; the bad news is that I haven’t got the foggiest idea how to review it.

The Suzuki Jimny (not Jimmy) picks up where its SJ-Series ancestor left off – amusing and confusing most members of the public. The Jimny’s dimensions and stature border on comical and, as a friend correctly identified, while a Daihatsu Terios looks fun the Jimny is just plain funny.

You don’t think so? Consider this. The little critter is only 3.65m long (WITH spare wheel), a chuckling 1.6m wide and a grinning 1.7m tall. It weighs a whisper over 1 ton and has a wheeled hamster under its amusing bonnet. No, wait. Four hamsters.

Our test car rocked up with sandy metallic paint and trendy five-spoke mag wheels, but even its darkened headlights couldn’t stop me from walking around it (very quickly) with a hearty laugh. The Jimny is probably smaller than you imagine it to be right now.

The Jimny’s calling card is that, ignoring any super-mini rental cars, it possesses respectable 4×4 abilities. And funnily enough, it gathers the same attention as super-massive SUV’s; admiration, jealous insults or disgust.

Here are some of the favourite Jimny taunts for your entertainment… No, I don’t know where the rest of it is. Yes, the lights work and it can stay up after 8pm. No, it can’t fold up and fit in your pocket or handbag.

Amusingly, while all these insults are being dished out the critics are prodding, pushing and peaking around the little Suzuki with child-like vigour. One such instance even ended in a 15 minute test-drive where I discovered that the Jimny will gladly carry four adults in acceptable comfort.

The front seats are quite supportive and offer decent head- and leg-room, although the latter will be seriously diminished to accommodate rear passengers. Both front seats fold forward to grant access to the rear bench, whose two backrests fold flat to offer more cargo capacity.

Boot space should be familiar territory to regular users of a Smart Fortwo, so at least the folding rear seats give the Jimny slightly more versatility. A more enthusiastic demister would be good though, as four grown-ups will instantly steam up all windows of the small cabin on a winter’s day.

Further goodies inside the little Suzi include air-conditioning, power steering, electric windows and mirrors, plus a CD/radio combo. The plastics and fabrics are nothing too exciting and everything is laid out in a fuss-free fashion.

The instruments are similarly basic and easy to read, although a trip meter would’ve been nice. Oh, and a clock. Safety items include driver and passenger airbags, ABS brakes, alarm, immobiliser and central locking.

The Jimny has a thin steering wheel which provides light and easy operation, as do all the pedals. The 5-speed manual gearbox is slightly notchy though and controlled by a less-than-precise gear lever. I hope you realise that I was joking earlier about the four hamsters.

Thankfully its engine is quite rev-happy as steep inclines or heavy loads will necessitate gear changes and full throttle to keep going. Also, you won’t ever be fast enough to overwhelm the Jimny’s slightly firm suspension.

Speed bumps, potholes and high-speed bumps are terribly uncomfortable but the tiny Suzuki was less jittery and bouncy than I expected. The ABS brakes work well with only a slight hip wiggle under full-bore emergency testing.

Grip levels are, umm, I never tested them. A Suzuki Jimny should never face a sharp bend or handling course; due to its hard suspension and top-heavy construction. But coupled to 4-wheel-drive, low range, diff-lock, plus fantastic approach and departure angles the mountain goat will surprise most people beyond the tarmac.

Each Jimny is sold for N$182 900 with a 3 year warranty and 4 year 60 000km service plan. That makes it fun to drive, a pleasure to park, funny to look at, brilliant off-road, but a tad expensive. And that’s the reason you don’t see many Jimnys on our roads. What a shame.