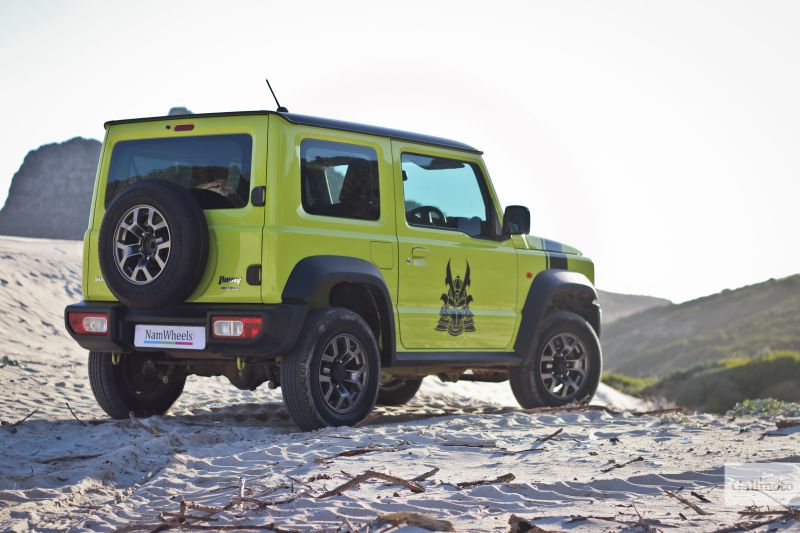 Ford Mustang, Ferrari F40, Mercedes 300SL Gullwing. All of these are legends in their own right and will get you plenty of attention but if you need a little more – right now I guarantee it – just get yourself the brand-new Suzuki Jimny. Our test car’s black stickers on crazy lumo-green-yellow paint can probably help as well.

Although I didn’t drive the Jimny for very long, a few days between Christmas and New Year were enough to prove this tiny 4×4’s immense popularity. Neighbours rang my doorbell, old colleagues asked to be taken for a spin, my family prodded and poked the poor thing and it got even crazier when I took it to a public space.

We were visiting my in-laws (who also loved it) and had ordered takeaway fish and chips from down the road. This presented me with the perfect opportunity to demonstrate the car to my father-in-law (he already likes Jimnys) and we quickly zipped down to the harbour-based seafood restaurant.

Once parked outside the entrance, I waited in the luminescent off-roader and within seconds someone knocked on my window. “And… what’s it like?” By this time I already had a well-rehearsed spiel of new specs and more power, increased size and efficiency in an iconic shape which drives more like an old-school 4×4 than a car.

…new specs and more power, increased size and efficiency in an iconic shape which drives more like an old-school 4×4 than a car.

That, by the way, is pretty much my summary of the new Jimny, in case you can’t be bothered to read on. My newfound friend departed with a big smile and by telling me that he’d ordered a new Jimny for his wife. That’s when I found out that there is currently a waiting list for these. Yup, you read correctly: a waiting list.

No sooner had he turned the corner (with a final glance towards this car) and a young couple crept closer and closer. Pointing and smiling, the gent gave me a friendly wave so I dropped my window again and round two ensued. New specs ‘n power, iconic shape, slightly rugged drive, proper 4×4, bla bla, fish ‘n chips.

They were delighted. And although they didn’t have one on order, their nearest dealer had promised them a spin in the new Jimny because they actually owned the old, old version – Suzuki’s SJ / Samurai. And so, in the two minutes it took my skoonpa to get our lunch, I had met three new people just because of this car.

Yeah, surely a Gullwing or F40 would garner the same amount of attention but I bet you most of that will be negative, laced with envy and clandestine hatred. A Jimny is different because it’s way more affordable; and thus, attainable. It’s square and bulky but unlike a Hummer or F40, it’s not intimidating or sexy. It’s likeable.

I think that Suzuki’s Jimny is the most charming car I know. Think about it. Although it has a few shortcomings (by modern standards) nobody around a braai fire ever criticizes it. The meanest thing people may do is chuckle a bit; before admitting that a skilled driver will see it sail through most off-road scenarios.

A rival bakkie, Land Rover or fancy 4×4 will get mercilessly slaughtered but the Jimny – never.

And the final, concrete proof of its charisma is that my mother absolutely adores it. She wants to buy an automatic version and keeps reminding me of the Gypsy – that older Jimny bakkie for sale in Namibia – when I mention that I could do with a bakkie for garden work, taking the dogs out or fetching horse poop.

Which brings me to a few other practical things we tried with this new Jimny 1.5 GLX AllGrip. My colleague moved house, sort of, and managed to get a washing machine in the back. That’s with its rear seats folded flat because when they’re erect, you can barely fit two shopping bags behind them.

That said, there’s plenty of room at the front and with the passenger seat shoved forward, my wife and four-month old daughter fitted in the rear quarters. The rear-facing baby seat was no big hassle to install and thanks to the Jimny’s upright stance, there’s plenty of head-room and visibility to keep rear occupants happy.

The next thing I did was test the Jimny’s engine and braking performance, although I’ll admit that they’re slightly irrelevant in such a leisurely 4×4 vehicle. For the record, the new 1.5L engine spits out 75kW (102hp) or 130Nm in a wonderfully perky and relatively linear manner with quite a husky voice. It’s distinctive.

Our GPS-based equipment measured a best 0-100km/h time of 11.75 seconds and a single emergency stop from 100km/h in 3.28 seconds and 46.70 metres. None of these are on today’s high standards but fairly impressive considering the car’s size, weight, construction and skinny, semi off-road 205/70R15 tyres.

It’s worth noting that these provide unbelievable grip; as evidenced by the feisty launch in our performance video further down this page. My colleague did multiple off-road tests with this Jimny where its 2H, 4H and 4L (low range) capabilities were as impressive as we all expected. It’s also got an excellent turning radius.

Downsides? The obvious one is handling – skinny tyres and tall body don’t bode well for carving through corners but that’s not what it’s meant for; even though its wheelbase is larger than before. I even heard of someone complaining about its behavior on mountain passes. I’m sorry, what? Do you also bitch about your Corolla’s prowess in the dunes?

No, that’s what a Jimny is for. Like old Landies or Cruisers, it will happily zip around town all day but what it actually wants to do is clamber up some mountains, ford a few rivers and enjoy a sundowner on the beach. It can do 120km/h on the highway, prefers 105km/h and its 210mm ground clearance will respond to even the slightest side-wind with gusto.

Again, not its forte. The gears are well-spaced for city commuting or highway jaunts with surprising amounts of torque in its taller ratios. All pedals and main controls (including the steering) are easy to operate and perhaps too vague or light by today’s standards but perfect for – brrrr tish – off-roading.

I found the interior layout quite simple, almost playful, with a highlight in this GLX model being its touchy-feely infotainment system. It can do Bluetooth and stuff. The instruments are easy to read but there’s no coolant gauge and a slightly scary range indicator; which has to work with the filling of a 40L fuel tank.

So. If you were expecting the Jimny to have grown up and become a mini RAV-4 or half-size X3, you’ll be in for a 3,625mm long disappointment. Sure, it’s got a few extra bits ‘n bops, some more space here and there and it looks a little different than before but even after its predecessor’s lengthy stint, Suzuki stuck to the Jimny’s recipe.

Thank you, Suzuki. Not only for lending us this cool car for a whole month, but also for keeping it real and not bowing out to peer pressure, focus groups or trendy niches. Thank you for keeping the Jimny simple and old-school because we already have a world full of refined compact SUV’s and certainly didn’t need another one.

Long live the legendary Jimny which, thankfully, is new but not much improved.

Yet another reason I love it.