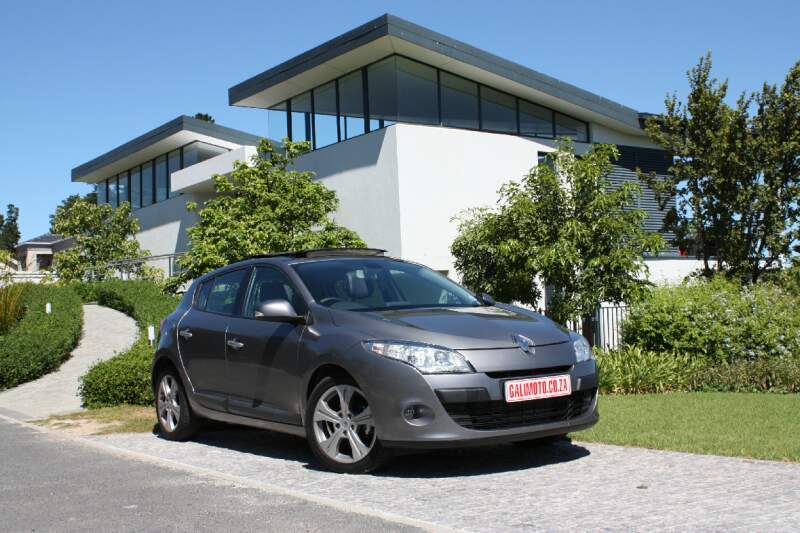 I’m afraid I can’t think of any clever lines or catchy quotes for this week’s car, probably because my French is so rotten. That didn’t diminish my enthusiasm for NamWheels’ latest test vehicle; the new Renault Megane hatchback.

Our weekly visitor pulled into the driveway wearing a dark grey metallic coat and made cheerful clucking noises with its 1.9 litre dCi turbo-diesel engine. Let us evade the topic of its predecessor’s love-em or hate-em looks, because the new one is quite a handsome beast that collected only positive comments while in my care.

The initial hesitation from family and friends justifies the frantic repairs Renault is doing to its image and product line-up, and after a week with the Megane it seems that their efforts appear to have worked. Apparently Renault also boasts one of the freshest (read: most current) vehicle line-ups in South Africa.

Megane’s nose could be accused of falling in line with the corporate face trend each manufacturer is striving for (to varying degrees of success) and while its ancestor’s back end forced most people into a double-take, the new one displays quite a pretty derriere.

The distinctive wedge-shape and raised bonnet line are signs of current design cues, as are the swooping creases that break the profile of the new Renault. Our test mule had also been fitted with an optional double glass sunroof, of which only the front half opens.

This will allow more sunlight and fresh air into a cabin which can only be described as French. The dashboard, seats, door pockets and various trim items are highly fashionable and elegant; black leather meets silver trinkets and vinyl or plastic in a marriage of superb fit ‘n finish.

In order to serve its essential Frenchness (vive la difference and all that) the instruments resemble something that came off the starship Romulus’ bridge. They’re difficult to describe in just one sentence so I urge all readers to do their own investigation; the upside is that I quickly got used to the analog / digital combination of gauges.

At this point I’d love to report that all the infotainment equipment is arranged in a logical manner but I would be lying. It isn’t. The main radio has buttons for most functions but lacks any sort of screen, a function that the in-dash Tomtom screen bravely attempts. Audio and radio information is rather limited, which is to be expected of something that’s supposed to be a GPS.

On the right of the steering column sits the traditional Renault audio/source/telephone stalk whose easy layout adds more convenience to your daily commute. However, the Tomtom navigation control unit sits on the center tunnel between the front seats.

Behind that is a lonely toggle switch that awakens Megane’s speed limiter or cruise control, which can only be set by the two (only) buttons on the steering wheel. And to flip between vehicle/trip information on the flamboyant instrument cluster, you push a button on the wiper stalk.

As you can deduct I wasn’t exactly impressed by the ergonomic flow of things. Having typed that, the various systems of the new Megane (including the quick Tomtom navigation) did follow my exact orders once I had figured out where and how to operate them.

More importantly, they couldn’t distract me from the powerful (96kW/130hp) and lively (300Nm) turbo-diesel engine that delivers smooth and linear power via a 6-speed manual gearbox to the front wheels. Keep your foot in it and the 1.9 dCi will zip past 100km/h in 9.5 seconds, eventually reaching 210km/h.

In everyday conditions the car should be happy with 5.1L/100km (I only managed 7.3) and emits a mere 135g of CO2/km on average. Thanks to its 60L fuel tank, most sensible drivers can look forward to a range well in excess of 1000km between refills.

And as is customary for French hatchbacks, this one also did a sterling job of clinging to the tarmac I aimed for. The suspension gives great feedback and offers a good mix between comfort and sporting intention. Even with 16” wheels (17” optional) the Megane has predictable (and highly commendable) manners before under-steer sets in.

Perhaps I was too hard on Mademoiselle Megane and her intricate controls, because her light pedals, precise steering, hard but supportive seats and willing motor are a marvellous way of darting around your hood. She’s even competitively priced at N$264 900 with a 5-year 100 000km service plan and 5-year 150 000km warranty. Sounds good to me!