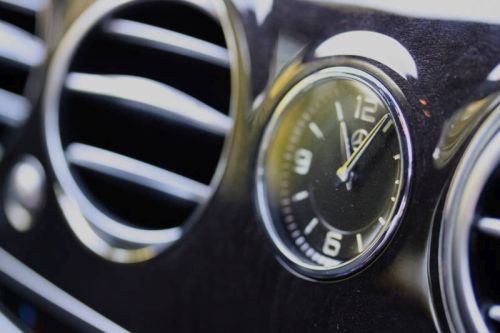 Dear car manufacturers, I’m writing to you today with less of a rant than a positive criticism about a trend that has been slowly creeping into luxury cars over the past few years. It isn’t massage seats, head-up displays or infra-red vision, no, it’s the analogue clock.

Telling the time isn’t essential to driving a motor car, something the Suzuki Jimny and Tata Indica LE already proved. And with the advent of digital displays one usually finds an LCD clock somewhere in the vehicle; sometimes duplicated and occasionally out of sync between instruments and infotainment screen.

Land-Rover still puts a rudimentary timepiece in its rustic Defender and this basic clock has made its way up the ladder to its luxurious Discovery and Range Rover brethren. I don’t have a problem with these items as they more-or-less suit the interiors of their hosts.

Which brings me to my main gripe: if you’re going to fit a snazzy clock to your snazzy car, I would love it to conform to one of the following. A, its design is exactly like that of the main instruments or B, it has a unique look that contrasts the interior well.

I’ve just thought of C, which is probably most important of all: please ensure that your clock, conforming or unique, is of a high enough quality to compliment the rest of the cabin. The Mercedes S-Class and Jaguar XJ spring to mind – great clocks, plastic look.

The Merc’s item looks flat and uninspiring, even erring on the side of too small. AMG versions aren’t much better but at least their numbers seem to match the ones on your instruments. And much like its English rival, Jaguar, you can find a digitised analogue clock somewhere in a display.

The leaping cat cars counter with a clock of decent size, lovely depth and modern blue face to suit their interior’s modern and traditional elements. Except that the silver needles look cheap and the clock is illegible at night or during the day or at dawn or at sunset.

Volkswagen’s CC fails on two new levels, the first being the clock’s annoyingly reflective and curved housing. Secondly, the unit is the spitting image of a hostel nightstand alarm clock and I usually drive around with great anticipation, waiting for it to emit incessant sets of four short beeps.

Or would you rather fancy something to remind you of the more modern, blinking red LCD clock radios? May I suggest the Nissan 370Z, a brutally brilliant bruiser with a no-nonsense interior and three dials in separate pods on top of its dashboard. Pity that one of them is a stupid LCD clock.

The only car to get it right so far seems to be the surprisingly good Peugeot RCZ. Here you will find a big timepiece between the two main air vents, tilted enough not to reflect and showing plenty of detail which corresponds perfectly with the rest of the cabin. C’est tres bien!

Did I leave out your favourite car, preferred clock or do you want to rant about something else? Feel free to drop me a line by using our Contact page.