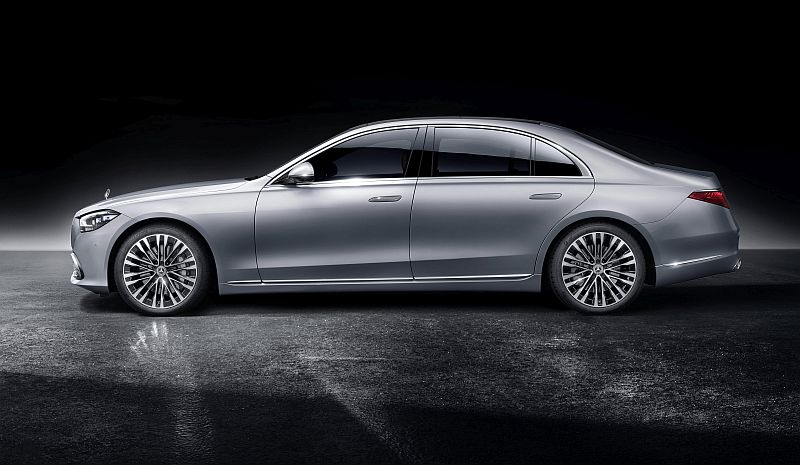 Mercedes-Benz just launched the latest version of their flagship sedan, the S-Class. NamWheels gives you a few pointers about this new super-saloon.

The S-Class has always been the flag-bearer for new technologies. Airbags, ABS brakes, satellite navigation, double glazing… you probably saw it first in the large Mercedes saloon. This new model pioneers – among many other things – full airbags for the rear passengers, various pre-collision measures and augmented reality in the navigation and heads-up display.

2. The cockpit is all-digital

Tesla may have done it first, while other manufacturers are trying their luck with multiple screens, yet Mercedes gifted their new S-Klasse a gigantic mid-dashboard touch-screen. This de-clutters the cabin and lets the occupants control everything from audio, ambience, communication, ventilation and vehicle settings with their fingertips. All displays – including the digital instrument cluster – are OLED technology.

3. It has an impressive customer retention rate

According to online statistic, between 70 and 80% of worldwide S-Class owners stay with the brand and this range – they buy another S-Class.

Boo-hoo-hoo! Everyone at NamWheels shed a little tear when we heard that the large 12-cylinder engines and sleek two-door models are a thing of the past… even for future AMG models. The 12-pot was first introduced in the W140 series of the early 1990’s and survived until recently. It’s being phased out mostly in favour of efficiency.

Also gone are the 2-door coupé and convertible body styles. It’s rumoured that they are making room for the upcoming new SL, but S-Classes have been known to exist without them. At the time of its launch, new S-Class engine choices included six-cylinder turbo-petrol and turbo-diesel units, as well as a V8 turbo-petrol and various electrification / 48V mild hybrid options.

5. It just got more intelligent

The interactive MBUX (Mercedes-Benz User Experience) interface is now in its second generation and makes it worldwide debut in this new S-Class. It promises better and faster interaction with all major info-tainment controls while being app- and learning-ready for various regional options such as navigation and dialect voice command.

The previous S-Class already scanned the road ahead and adjusted its intelligent air suspension accordingly but, thanks to further technological advances, this new model can do even more tricks like keeping the entire vehicle body perfectly level at most speeds. As before, it also leans into corners like a motorbike to aid passenger comfort.

Our local Mercedes-Benz retailer, M+Z Motors, confirmed via email that the Namibian order books should open in the last quarter of 2020 with first deliveries probably starting six months later. Initial models may include the S400d, S500e and S560 / S580 with AMG derivatives following at a later stage.

Self-driving cars are not a novelty either, theoretically the previous S-Class was capable of driving itself but various bits of European legislation (and Mercedes-Benz’ exacting standards with multiple fail-safe measures) have delayed the roll-out of a self-driving S. This new one is certainly ready and the manufacturer alleges that it will be able to drive itself (conditionally and up to 60km/h) by 2021.

9. Now safer than ever

With every imaginable driver aid, active braking and driving assistance, collision avoidance systems, pre-collision safety measures, pedestrian safety systems and even post-collision assistants, the S-Class is most certainly among the safest cars on our roads. The body structure was engineered to best absorb and deflect the forces of an impact and if the car detects an impending side crash, it raises the suspension to minimise force.

Although the internal Mercedes-Benz model codes don’t always run sequentially, the S-Class got it right since its W220 version appeared in 1999. That was followed by W221 from 2006 to 2013 and the obviously-named W222 took over from 2013 until this new model arrived in September 2020.

Was there anything else you wanted to know about the new S-Class? Let us know in the comments below or read our previous reviews of the flagship Mercedes-Benz sedan: