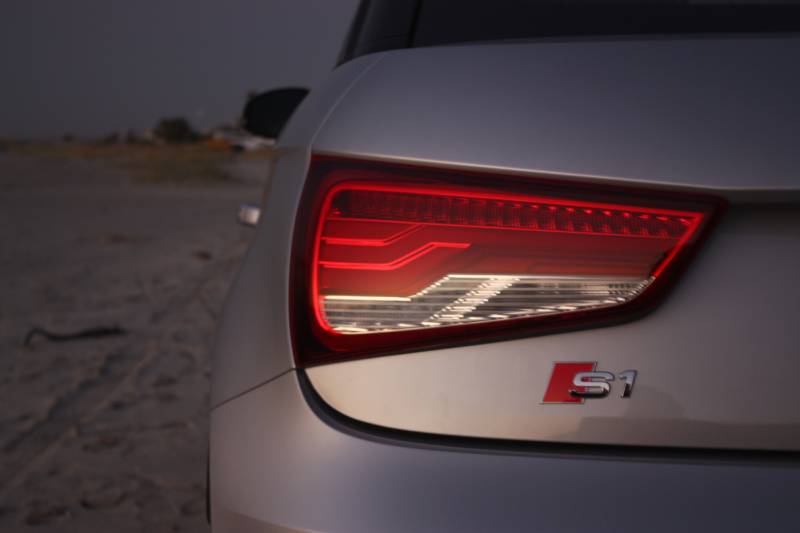 Today I bring you further evidence that Audi has gone a bit mental. Not content with building quality motor cars, their engineers have produced fine fast cars over the years. After building such monsters as R8, RS7, S8, RS4 and S3, they recently cornered the tiny A1, looked at each other and nodded quietly.

A few of them must’ve immediately darted off into the factory and returned with a trolley carrying the accomplished Audi/VW 2-litre turbo-petrol four cylinder TFSi engine. With current outputs ranging anywhere from 165 to 210kW, work immediately started to shoe-horn the motor into the A1.

Along the way, the battery migrated to the boot floor because of space issues and that’s when it must’ve dawned on some of these power-crazed dudes that perhaps the smallest of Audis couldn’t handle so much grunt. Hmm, what to do? The first and most obvious answer was: Quattro.

Audi’s dynamic four-wheel-drive system had never been fitted to an A1 before (or any premium A0 segment car, for that matter) but the men in white coats persevered. Much fettling ensued to fit a fully-independent S sports suspension with Audi Drive Select, progressive steering with dynamic ratios as well as bigger wheels.

Somewhere around this point, space was becoming a rare commodity; no thanks to an S-specific body kit with roof spoiler, Xenon Plus headlights and four tail pipes. Try as they might, one thing they couldn’t squeeze in was Audi’s S-tronic double-clutch auto’box so the S1 is only available as a 6-speed manual.

Our Racelogic Performance Box confirmed this when it spat out a best figure of 5.77 seconds at sea level. Even more impressive was the 400m time of 14.01 seconds (at 158.98km/h) and maximum forward acceleration of 0.91G. The Audi S1 is not only fast but has rather savage power delivery.

Its torque band is so broad that you can floor it in sixth gear at 1,500rpm and it will start accelerating immediately. Read: no need to gear down for overtaking. But if you pick the lowest possible cog and nail the stainless steel accelerator to the floor, the S1 rockets forward like little else.

Hard driving and quick gear shifts even produce a little squirm, some split-second torque steer that would probably unsettle this rascal if it wasn’t fitted with Quattro. Be mindful of this (and full boots of throttle mid-turn) and the S1 turns in, grips and corners phenomenally. Its big brakes behave equally well.

The slightly unruly power delivery (and booming engine noises in “Dynamic Mode”) put us in mind of Renault’s lunatic Megane RS, although the S1’s Quattro setup lends a reassuring net of confidence to proceedings. Audi’s claim of 7L/100km from the 45L tank is, as always, a best-case scenario.

We averaged 9L/100km during our week of testing but if you hardly touch the throttle, mid-sevens should be possible. I could tell you more about this car’s sober interior, extensive standard features, the cosy rear seating or tiny boot but I can’t put off its price any longer. An Audi S1 Sportback costs N$460,000.

So Audi’s also gone completely mental with the price, which could buy you a mid-spec A4 or decent Q3. Bear in mind though that you’re buying a rather limited edition car which is built to the best of its maker’s abilities. A maker who builds amazingly refined cars – and the occasional monster.